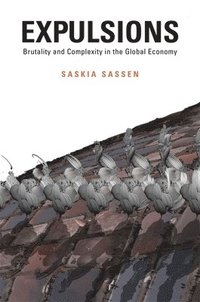 Brutality and Complexity in the Global Economy

av Saskia Sassen
(1 röst)
Inbunden Engelska, 2014-05-13
339
Köp
Spara som favorit
Skickas inom 7-10 vardagar.
Fri frakt inom Sverige för privatpersoner.
Finns även som
Visa alla 1 format & utgåvor
Soaring income inequality and unemployment, expanding populations of the displaced and imprisoned, accelerating destruction of land and water bodies: today's socioeconomic and environmental dislocations cannot be fully understood in the usual terms of poverty and injustice, according to Saskia Sassen. They are more accurately understood as a type of expulsion--from professional livelihood, from living space, even from the very biosphere that makes life possible. This hard-headed critique updates our understanding of economics for the twenty-first century, exposing a system with devastating consequences even for those who think they are not vulnerable. From finance to mining, the complex types of knowledge and technology we have come to admire are used too often in ways that produce elementary brutalities. These have evolved into predatory formations--assemblages of knowledge, interests, and outcomes that go beyond a firm's or an individual's or a government's project. Sassen draws surprising connections to illuminate the systemic logic of these expulsions. The sophisticated knowledge that created today's financial "instruments" is paralleled by the engineering expertise that enables exploitation of the environment, and by the legal expertise that allows the world's have-nations to acquire vast stretches of territory from the have-nots. Expulsions lays bare the extent to which the sheer complexity of the global economy makes it hard to trace lines of responsibility for the displacements, evictions, and eradications it produces--and equally hard for those who benefit from the system to feel responsible for its depredations.
Visa hela texten

Coupled with her earlier work, this may be a paradigm breaking/making work.--Michael D. Kennedy"Contemporary Sociology" (01/01/2015) Once again, sociologist Sassen uses her considerable knowledge to think creatively at both the local and global levels...In place of the principle of inclusion in the pre-1980s Keynesian era, the planet is increasingly dominated by a principle of exclusion of people, land, natural resources, and water. Sassen presents a powerful conceptual analysis and an equally powerful and timely call to action.-- (09/01/2014) Sassen offers a clear and rather heuristic argument that we could hardly ignore in trying to make sense of dynamics of in/exclusion under global financial capitalism, their mutual connections, and their locally diverse configurations...This work has the potential to generate not only insightful reflections on large-scale hyper-concentrations of capital and related global dynamics of people and places' expulsions, but also to engage inquiries into urban social dynamics that are invisible to macro analyses.--Giovanni Picker"Urban Studies" (07/01/2015) Expulsions is original, thoughtful, evidence-based, and chillingly lucid. There is no other book like it. Its arguments on growing inequality, land grabs, financial footlooseness, and biospheric destruction are a diagnosis of our unstable and disconcerting times--a much-needed wake-up call.--Ash Amin, University of Cambridge Saskia Sassen's Expulsions describes the global forces that make ever more tenuous and fragile most people's grip on the places where they live.--Rowan Moore"The Observer" (12/07/2014) In this intellectually audacious and persuasive book, Sassen exposes the fundamental forces at play in current forms of economic, political, and social structures. She correctly contrasts the world as most people understand it with the world as it is actually evolving, towards an extreme form of capitalism with activities that occur across international borders--to devastating effects. This is a powerful, highly relevant, and timely book.--Patricia Fernandez-Kelly, Princeton University

Saskia Sassen is Robert S. Lynd Professor of Sociology and co-chair of the Committee on Global Thought at Columbia University.