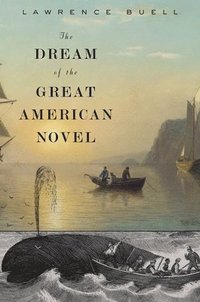 The Dream of the Great American Novel

av Lawrence Buell
Häftad Engelska, 2016-05-17
299
Köp
Spara som favorit
Skickas inom 5-8 vardagar.
Fri frakt inom Sverige för privatpersoner.
Finns även som
Visa alla 2 format & utgåvor
The idea of "the great American novel" continues to thrive almost as vigorously as in its nineteenth-century heyday, defying 150 years of attempts to dismiss it as amateurish or obsolete. In this landmark book, the first in many years to take in the whole sweep of national fiction, Lawrence Buell reanimates this supposedly antiquated idea, demonstrating that its history is a key to the dynamics of national literature and national identity itself. The dream of the G.A.N., as Henry James nicknamed it, crystallized soon after the Civil War. In fresh, in-depth readings of selected contenders from the 1850s onward in conversation with hundreds of other novels, Buell delineates four "scripts" for G.A.N. candidates. One, illustrated by The Scarlet Letter, is the adaptation of the novel's story-line by later writers, often in ways that are contrary to the original author's own design. Other aspirants, including The Great Gatsby and Invisible Man, engage the American Dream of remarkable transformation from humble origins. A third script, seen in Uncle Tom's Cabin and Beloved, is the family saga that grapples with racial and other social divisions. Finally, mega-novels from Moby-Dick to Gravity's Rainbow feature assemblages of characters who dramatize in microcosm the promise and pitfalls of democracy. The canvas of the great American novel is in constant motion, reflecting revolutions in fictional fashion, the changing face of authorship, and the inseparability of high culture from popular. As Buell reveals, the elusive G.A.N. showcases the myth of the United States as a nation perpetually under construction.
Visa hela texten

Although readers will encounter many usually canonized suspects, Buell's scope is wide enough to encompass the varieties of novelists' imaginations and to consider the implications of multiculturalism and globalism in redefining the future of American fiction.--Kirkus Reviews (11/01/2013) Anyone reading it will learn a great deal about the state and the study of our national literature.--Michael Gorra"Wall Street Journal" (02/08/2014) As I read this book I was excited by the unexpectedness, even brilliance of many of its commentaries. This is an important work that every scholar of American literature and many who are not, will want to read. It redefines the concept of the Great American Novel and rethinks the nature of the canonical for our contemporary critical times.-- (02/27/2014) Demonstrating an enviable command of the full sweep of modern literary history, but also an expert eye for the telling individual case, Buell's analysis of the dream of the Great American Novel is itself a great work of Americanist literary criticism, brilliantly faithful both to the anachronism and the continuing urgency of the idea at its heart. One comes away from this highly readable book with a new understanding of how certain works of literature have made themselves matter to American readers and, what's more, an exquisitely balanced sense of the prospects for the novel's future as an expression of national identity--and national discord.--Mark McGurl, Stanford University Impressive in scope, erudition, and detail... Buell sees well beyond the canonical Great White Males and perceives American studies as a properly 'transnational' and 'transpacific' profession. Buell's engaging book should itself become a landmark of American studies, as it exemplifies precisely why great literature needs to be read and taught.-- (11/11/2013) Lawrence Buell...deserves congratulations for taking on this broad and controversial subject... Whether it survives or has ever existed, the GAN is really just a critical peg on which Buell hangs some fine analyses of canonical American novels.--Elaine Showalter"Prospect" (03/01/2014) Magisterial... Buell's magnum opus... Buell can summarize an argument or a plot with eye-opening precision--and make you suddenly see new things in familiar books... The grateful audience for this book will be other scholars and teachers of American literature, who will plunder its pages for decades to come. And plunder it they will because, all cavils aside, Buell proffers brilliant analyses of a dozen or so front-runners in the Great American Novel sweepstakes.-- (01/01/2014) Rich in critical insight, Buell's analysis locates scores of novels in its interpretive mosaic. And even in a conclusion suggesting that America's global decline dims the prospects for its realization, Buell wonders if the [Great American Novel] isn't stirring again in surprising new developments in science fiction. An impressively ambitious literary survey.-- (01/01/2014) This is an ambitious work about an enduring ambition...What emerges from [Buell's] inquiry is a close consideration of those books that have captured the state of our divided yet United States...This is a valuable contribution to and codification of a subject often discussed but seldom examined with scholarly focus before.--Nicholas Delbanco"Chicago Tribune" (02/23/2014) Wide-ranging and astute, Lawrence Buell's literary history revolves around an unkillable dream, around scripts that make some texts institutions.--Wai Chee Dimock, Yale University This is a massive, compendious book, self-consciously a magnum opus.--Richard H. Brodhead"Novel" (05/01/2015) Lawrence Buell's masterful study traces the long history behind the idea of the great American novel... Buell's command of American literature as a whole, evident in his asides and brief discussions of many texts that would never be contenders for the GAN, is, by itself, impressive...The Dream takes seriou

Bloggat om The Dream of the Great American Novel