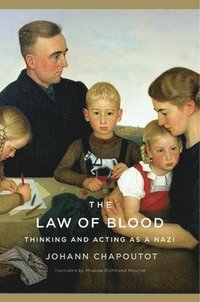 The Law of Blood

Thinking and Acting as a Nazi

av Johann Chapoutot
Inbunden Engelska, 2018-04-02
289
Köp
Spara som favorit
Kan tyvärr inte längre levereras innan julafton.
The scale and the depth of Nazi brutality seem to defy understanding. What could drive people to fight, kill, and destroy with such ruthless ambition? Observers and historians have offered countless explanations since the 1930s. According to Johann Chapoutot, we need to understand better how the Nazis explained it themselves. We need a clearer view, in particular, of how they were steeped in and spread the idea that history gave them no choice: it was either kill or die. Chapoutot, one of France's leading historians, spent years immersing himself in the texts and images that reflected and shaped the mental world of Nazi ideologues, and that the Nazis disseminated to the German public. The party had no official ur-text of ideology, values, and history. But a clear narrative emerges from the myriad works of intellectuals, apparatchiks, journalists, and movie-makers that Chapoutot explores. The story went like this: In the ancient world, the Nordic-German race lived in harmony with the laws of nature. But since Late Antiquity, corrupt foreign norms and values-Jewish values in particular-had alienated Germany from itself and from all that was natural. The time had come, under the Nazis, to return to the fundamental law of blood. Germany must fight, conquer, and procreate, or perish. History did not concern itself with right and wrong, only brute necessity. A remarkable work of scholarship and insight, The Law of Blood recreates the chilling ideas and outlook that would cost millions their lives.
Visa hela texten

"The Law of Blood does invigorating work in attempting to explain how such a wildly repulsive ideology could take hold in the hearts and minds of shopkeepers, artisans, soldiers, and housewives-how a solid percentage of a modern nation could have aligned itself with such obvious, ham-handed, manipulative cruelty. The book has many strengths, but its greatest is a kind of stern empathy, a cold understanding of the complexities of the exchange that was taking place in Germany in the 1930s...Those conditions-crowds of glassy-eyed young men and women chanting 'blood and soil' in organized marches, civilized, compassionate people averting the gaze while government agencies carry out brutalities in their name, statesmen remaining mute while their government leaders pitch them into new antagonisms around the world-have seldom had an examination as detailed and ambitious as they get in these pages. The Belknap Press is to be praised for bringing the book to an English-speaking audience."-Steve Donoghue, Open Letters Review "The Law of Blood is a useful addition to the literature on Nazi ideology...Readers will find much here to further their understanding of what Nazis thought and why they behaved the way they did."-Dan Stone, Times Higher Education "The author's consistent refrain is a warning that scholars must take seriously what the Nazis said and wrote...Chapoutot adds to our understanding of Nazi ideas and their results by excavating the 'moral universe' from which myriad atrocities emerged."-Chad S. A. Gibbs, Religious Studies Review "Chapoutot [is] one of the most brilliant historians of his generation... The Law of Blood...is not only absorbing and informative but important-an event."-Pierre Assouline, La Republique des Livres "A vertiginous reflection on the dialectic of culture and barbarism."-Gregoire Kauffmann, L'Express "In this ambitious study, Johann Chapoutot contributes an extremely innovative, in-depth, and comprehensive picture of the mental world created by Nazism. He goes beyond the abstract notion of Weltanschauung and masterfully shows what Nazi thinkers affirmed about the origins of the world, about all life as a constant battle, and about their goal to reign over the world in an achievable eschatological time as a pure race. This mode of thinking, which pervaded all spheres of life, allowed for killing in general and the killing of the Jews-the ultimate Weltpest-in particular. The war against the Jews was a culmination of the essential features of National Socialism. This book is pathbreaking, and a must for anyone interested in National Socialism, the Shoah, or the collective behavior of genocidal societies in general."-Dan Michman, Head of the International Institute for Holocaust Research and Professor Emeritus of Modern Jewish History, Bar Ilan University "Chapoutot, one of the most gifted European historians of his generation, has enriched the French historiography of the Second World War, Nazi Germany, and the Holocaust. He has personally altered the European discussions of Nazi ecology, Nazi law, and the Nazi view of the past. At a time when Nazi self-understanding should be of interest to us all, this book is very welcome indeed."-Timothy Snyder, Yale University "Chapoutot offer[s] many illuminating discussions of the ways in which Nazi intellectuals reinterpreted Germany's history...Scholars of the Holocaust and modern European intellectual history will find much of value in this rich analysis of a diverse and perverse Nazi intellectualism."-Alice Weinreb, Holocaust and Genocide Studies

Johann Chapoutot is Professor of Contemporary History at Sorbonne University.