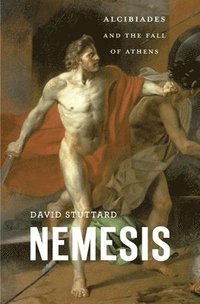 Alcibiades and the Fall of Athens

av David Stuttard
Inbunden Engelska, 2018-04-16
289
Köp
Spara som favorit
Alcibiades was one of the most dazzling figures of the Golden Age of Athens. A ward of Pericles and a friend of Socrates, he was spectacularly rich, bewitchingly handsome and charismatic, a skilled general, and a ruthless politician. He was also a serial traitor, infamous for his dizzying changes of loyalty in the Peloponnesian War. Nemesis tells the story of this extraordinary life and the turbulent world that Alcibiades set out to conquer. David Stuttard recreates ancient Athens at the height of its glory as he follows Alcibiades from childhood to political power. Outraged by Alcibiades' celebrity lifestyle, his enemies sought every chance to undermine him. Eventually, facing a capital charge of impiety, Alcibiades escaped to the enemy, Sparta. There he traded military intelligence for safety until, suspected of seducing a Spartan queen, he was forced to flee again-this time to Greece's long-term foes, the Persians. Miraculously, though, he engineered a recall to Athens as Supreme Commander, but-suffering a reversal-he took flight to Thrace, where he lived as a warlord. At last in Anatolia, tracked by his enemies, he died naked and alone in a hail of arrows. As he follows Alcibiades' journeys crisscrossing the Mediterranean from mainland Greece to Syracuse, Sardis, and Byzantium, Stuttard weaves together the threads of Alcibiades' adventures against a backdrop of cultural splendor and international chaos. Navigating often contradictory evidence, Nemesis provides a coherent and spellbinding account of a life that has gripped historians, storytellers, and artists for more than two thousand years.
Visa hela texten

"Alcibiades will always be remembered as one of the slipperiest statesmen in history...Nemesis is a rich and rewarding biography, as thorough as it is bracing and as measured as it is entertaining. Stuttard is to be praised for capturing the complexity of both the man and the world he lived in with such sensitivity and clarity."-Daisy Dunn, New Criterion "Stuttard is skilled at drawing together background information that adds context to his characters' actions, seamlessly smuggling exposition of Greek and Persian society and customs into his narrative. Nemesis demonstrates how readable and entertaining popular narrative ancient history can be."-Carol Atack, Times Literary Supplement "Stuttard's new life of Alcibiades is a lively, fast-paced and eminently readable attempt to bring the insolent young monster back to life."-Peter Thonemann, Literary Review "[A] robust new biography of Alcibiades."-Thomas W. Hodgkinson, Spectator "It's quite the tale, told with rare gusto and precision by David Stuttard-an astute inquisitor of the conflicting sources with an eye for the telling anecdote."-Jonathan Wright, Catholic Herald "Stuttard's work is laudable especially in its depth and its use of available sources."-Samuel Ortencio Flores, Bryn Mawr Classical Review "As an entertaining biography of a scoundrel, Nemesis is superb...Stuttard eloquently tells the reader of the rise and fall of a man and his city, who both angered the gods through their acts and attitudes."-Choice "No one before has come anything like as near as David Stuttard to penetrating the inner recesses of the mainsprings of Alcibiades' often outrageous, sometimes statesmanlike, always commanding public performances. Dr. Stuttard's mastery of the ancient sources and his narrative exposition are dazzling throughout, bringing to singing life the mercurial, magnetic, passionate, and persuasive personality of this still hugely controversial Athenian aristocrat of the fifth century BC."-Paul Cartledge, author of Democracy: A Life "David Stuttard is a recognized expert at making the ancient Greek world come alive for modern audiences. In Nemesis, he conveys the horror and the glory of the years of Athens' greatness and decline. Central to these processes was the flamboyant Alcibiades, and Stuttard, wearing his learning lightly, gives us a hugely entertaining biography that is simultaneously an exciting adventure story and a pithy history of the period."-Robin Waterfield, author of Creators, Conquerors, and Citizens: A History of Ancient Greece "Stuttard has offered us a colorful, lively, engaging analysis of one of ancient Greece's most fascinating and slippery characters: Alcibiades. With deft skill, Stuttard navigates the ancient sources to offer the portrait not simply of a hero, or a villain, but of a man with equal talents and failings who managed to captivate the attention of the ancient world."-Michael Scott, author of Ancient Worlds: An Epic History of East and West

David Stuttard is an independent scholar, theater director, and Fellow of Goodenough College who has written more than ten books about ancient Greece, including Nemesis: Alcibiades and the Fall of Athens.