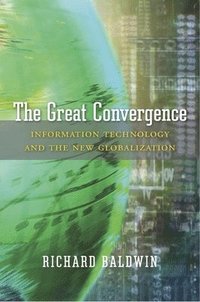 Information Technology and the New Globalization

av Richard Baldwin
Inbunden Engelska, 2016-11-21
299
Köp
Spara som favorit
Fåtal ex i lager. Skickas inom 1-2 vardagar.
Fri frakt inom Sverige för privatpersoner.
Finns även som
Visa alla 1 format & utgåvor
Between 1820 and 1990, the share of world income going to today's wealthy nations soared from twenty percent to almost seventy. Since then, that share has plummeted to where it was in 1900. As Richard Baldwin explains, this reversal of fortune reflects a new age of globalization that is drastically different from the old. In the 1800s, globalization leaped forward when steam power and international peace lowered the costs of moving goods across borders. This triggered a self-fueling cycle of industrial agglomeration and growth that propelled today's rich nations to dominance. That was the Great Divergence. The new globalization is driven by information technology, which has radically reduced the cost of moving ideas across borders. This has made it practical for multinational firms to move labor-intensive work to developing nations. But to keep the whole manufacturing process in sync, the firms also shipped their marketing, managerial, and technical know-how abroad along with the offshored jobs. The new possibility of combining high tech with low wages propelled the rapid industrialization of a handful of developing nations, the simultaneous deindustrialization of developed nations, and a commodity supercycle that is only now petering out. The result is today's Great Convergence. Because globalization is now driven by fast-paced technological change and the fragmentation of production, its impact is more sudden, more selective, more unpredictable, and more uncontrollable. As The Great Convergence shows, the new globalization presents rich and developing nations alike with unprecedented policy challenges in their efforts to maintain reliable growth and social cohesion.
Visa hela texten

[An] excellent book...Baldwin's work seems likely to become a standard, perhaps indispensable, guide to understanding how globalization has got us here and where it is likely to take us next. There can be few more vital subjects today that will benefit from this sort of clear and comprehensive exposition.-- (11/24/2016) An essential book for understanding how modern trade works via global supply chains. An antidote to the protectionist nonsense being peddled by some politicians today.-- (04/25/2018) If the corrosive events of the [presidential election] in America are anything to go by, economist Richard Baldwin is absolutely, stunningly (yet unfortunately) correct. That said, this book does endeavor to change the way we think about globalization--rather than the future of humanity.-- (11/14/2016) In this congenial volume, [Baldwin] adroitly covers 200,000 years of human trading practices, deploying insights from archaeology, anthropology, climate science, economic history, political science, development studies and other disciplines as he goes. He takes us on a journey from the ancient world to the 21st century, and from the global North to the developing South, in order to set the scene for the past 25 years of globalization.-- (01/05/2017) In this deft treatise, economist Richard Baldwin argues that we are seeing a third wave [of economic globalization]...The first two waves of globalization were boons for all. The third, Baldwin argues, is working mainly to the advantage of intellectual-property owners in developed countries, and of emerging markets able to access productive global value chains.-- (08/03/2017) In this meaty treatise, Baldwin argues that we're in the process of a major shift in world economics and economic policy needs to be adjusted accordingly...Baldwin has put together an intriguing and compelling case.--Publishers Weekly (starred review) (09/16/2016) Offers a valuable summary of how we got to where we are now. It's a narrative that bears retelling.-- (04/21/2017) Shows how the global production system has moved from trade in goods and services to trade in information, with multinational corporations obsessively trying to prevent intellectual-property leaks to competitors. Baldwin's analysis has important implications for both the governance of global trade and domestic policymaking.-- (09/21/2018) It's a very powerful description of the newest phase of globalization.--Larry Summers"Five Books" (02/20/2017) Many books deal with various features of globalization. Only Baldwin's deals with the logic of globalization. Globalization happens when the movement of goods, knowledge, and people is technologically possible and cheap enough to encompass the entire world. The first globalization was built on the movement of goods, the one we live today on the movement of knowledge and information, the next one will be built on the movement of people. It is a must-read for those who want to learn about the past and to peer into the future.--Branko Milanovic, City University of New York Sheds a bright light on the nature of trade in today's era--the 'second globalization' since the industrial revolution.--Martin Wolf"Financial Times" (11/23/2016) The first part of this book offers a breathtaking overview of the four phases of globalization that Baldwin argues have taken place during the past 200,000 years.--G. John Ikenberry"Foreign Affairs" (01/01/2017) In this brilliant book, Baldwin has succeeded in saying something both new and true about globalization.--Martin Wolf"Financial Times" (12/02/2016) There is much in this book to ponder.--Tyler Cowen"Marginal Revolution" (11/24/2016) Will surprise and illumine.--Paul Collier"Times Literary Supplement" (11/23/2016) This important book should change the way we think about globalization. There have been two big globalization booms over the past two centuries. The first caused divergence between rich and poor nati

Richard Baldwin is Professor of International Economics at the Graduate Institute, Geneva, and Director of the Centre for Economic Policy Research (CEPR), London.