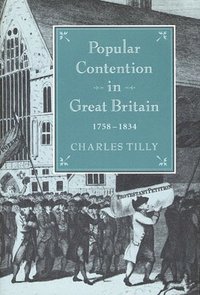 Charles Tilly is one of the most important historians of recent years...This [book] is a breath of fresh air in the increasingly dusty room of texts without human agents behind them...It is an important [book]. In its restatement of 'hard' history against cultural studies, many will see it as backward-looking. They would be very foolish...Historians have gone too far down the road with cultural theory and are in danger of negating their own vocation completely. Tilly reminds us, with John Cornford, that 'facts are stubborn things'--and that history without facts is a peculiar discipline indeed. -- Alun Howkins New Statesman and Society As always, Charles Tilly asks big questions and marshals precise theoretical formulations and massive empirical data in his search for answers...Contrasting the repertoire of contention in 1758 with that of 1833, Tilly discerns a new variety of claim-making taking shape, which in turn shares many features with our present-day modes of contention...[A] short review can hardly do justice to the complexity of Tilly's detailed argument and evidence. -- James Epstein Albion Tilly has spent many years creating a database of some 8,000 'contentious gatherings' (CGs) from south-east England in 13 selected years between 1758 and 1828 and from the whole of Britain between 1828 and 1834...He thus provides a substantial quantitative backing for the identification of changes over time. The result is a book which makes an important contribution to our understanding of the making--some would say remaking--of the public sphere in Britain...It is a thoughtful book, often innovative. -- R. J. Morris Economic History Review In theoretical vision, in sensitivity to the kinds of claims archival data can and cannot support, in clarity of writing and attention to detail, this is a book of exceptionally high quality. -- Roger V. Gould Contemporary Sociology Chuck Tilly's work on social protest in France and Britain barely needs any introduction. He is the doyen historical sociologist of his generation. Through his own work and that of his many research students he has had a major impact on the development of social history, particularly in the United States. This book has long been awaited as the culmination of his Contentious Gatherings project. So what do we find? We find an admirable survey of the various turns in the historiography of popular protest in Britain in the eighteenth and nineteenth centuries delivered in the clear, concise, and thought-provoking way that is Tilly's hallmark...We also have running through the book an excellent history of the socio-economic and political transformations that seized Britain between 1750 and 1840 which could be culled from the body of the text to make not only a best-selling but also an intellectually challenging undergraduate text. -- Andrew Charlesworth Labour History Review [A]n impressive effort has been made by Tilly to prove his point, that the changeover from one mode of protest to another, deeply influenced the political system of that day and led to some lasting and meaningful socio-political changes in Great Britain. From his conclusions it appears that the greater the incorporation of the masses in Great Britain into the accepted political dispensation of that time, the greater appeared their inclination to change their methods of contention...[A]n interesting, well researched and thought provoking work. -- Professor M. Roth South African Journal of Sociology This is vintage Tilly. His central thesis is that the ways British people gathered and organized to make public claims on each other changed radically between the 1750s and the 1830s...Tilly has provided sociologists and historians with a magnificent empirical resource accompanied by a subtle and powerful framework of interpretation. His approach is solidly rooted in the great and fertile tradition encompassing Barrington Moore and Norbert Elias..It is not often that historical scholarship is so effectively

Part 1 From mutiny to mass mobilization: contention in 1833; what changed and why?; what's at issue?; contending ideas; common action and shared understanding; repertoires of contention; insistent questions, possible answers; what's to come. Part 2 Contention under a magnifying glass: a change of repertoires; problems, sources, methods; a calendar of contention; numbering the struggles; forms of contention, old and new. Part 3 Capital, state and class in Britain, 1750-1840: proletarians, landlords and others; the growth of industry; urbanization; income and inequality; war and the British state; repression in Britain; popular participation in national politics; social movements and democracy. Part 4 Wilkes, Gordon and popular vengeance, 1758-1788: how Britain was changing; contention's flow; how the repertoire worked; against poorhouses and enclosures; workers' contention; mutations. Part 5 Revolution, war and other struggles, 1789-1815: associations in France and Britain; economy and demography; state, war and parliament; textures of contention; contentious issues; the issue is food; who contended, and how?; revolution and popular sovereignty. Part 6 State, class and contention, 1816-1827: economy and state, 1816-1827; from war to peace to contention; contentious contours; Queen Caroline; contentious actors; workers in action; contending with associations; political entrepreneurs, radicals and reformers. Part 7 Struggle and reform, 1828-1834: spurting population, expanding economy, consolidating state; repertoires for the 1830s; the political crisis of 1828-1834; embattled bobbies; swing; time for reform; workers; glimmers of revolution. Part 8 From donkeying to demonstrating: to retell the story; to meet in public; catholics in politics; toward explanation; social movements and demonstrations; national and international politics; foundations of popular contention; mass national politics and democracy. Appendices: sources and methods; major Acts by the British government directly affecting popular association and collective action, 1750-1834.