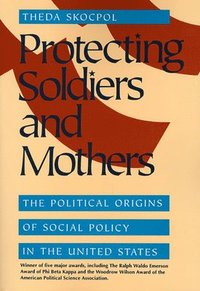 The Political Origins of Social Policy in United States

av Theda Skocpol
Häftad Engelska, 1995-04-01
599
Köp
Spara som favorit
Skickas inom 5-8 vardagar.
Fri frakt inom Sverige för privatpersoner.
Finns även som
Visa alla 1 format & utgåvor
It is a commonplace that the United States lagged behind the countries of Western Europe in developing modern social policies. But, as Theda Skocpol shows in this startlingly new historical analysis, the United States actually pioneered generous social spending for many of its elderly, disabled, and dependent citizens. During the late nineteenth century, competitive party politics in American democracy led to the rapid expansion of benefits for Union Civil War veterans and their families. Some Americans hoped to expand veterans' benefits into pensions for all of the needy elderly and social insurance for workingmen and their families. But such hopes went against the logic of political reform in the Progressive Era. Generous social spending faded along with the Civil War generation. Instead, the nation nearly became a unique maternalist welfare state as the federal government and more than forty states enacted social spending, labor regulations, and health education programs to assist American mothers and children. Remarkably, as Skocpol shows, many of these policies were enacted even before American women were granted the right to vote. Banned from electoral politics, they turned their energies to creating huge, nation-spanning federations of local women's clubs, which collaborated with reform-minded professional women to spur legislative action across the country. Blending original historical research with political analysis, Skocpol shows how governmental institutions, electoral rules, political parties, and earlier public policies combined to determine both the opportunities and the limits within which social policies were devised and changed by reformers and politically active social groups over the course of the late nineteenth and early twentieth centuries. By examining afresh the institutional, cultural, and organizational forces that have shaped U.S. social policies in the past, Protecting Soldiers and Mothers challenges us to think in new ways about what might be possible in the American future.
Visa hela texten

A monumental study that will likely become a classic in the history of the modern welfare state. -- Rosalind Rosenberg New York Times Book Review Complex, richly detailed...and grounded in extensive archival research...[Skocpol] has demonstrated that the polity and political institutions do matter...[A] powerful book that will surely generate a great deal of new research and writing about the history of social provision in the United States. -- Alex Keyssar Nation Invites readers to remember a halcyon period in women's politics when--both in spite and because of women's formal political exclusion--extensively organized, politically active women united around motherhood and claimed a place for women in social policy. -- Gwendolyn Mink Women's Review of Books Recognition that a kind of welfare state emerged even in America has hardly stilled the need to ask, once again, why the American variant came out so differently from those in western Europe. Skocpol's newest book... brings to these issues as powerful and iconoclastic an intellect as the historical sciences possess. Protecting Soldiers and Mothers belongs on a shelf of social policy history classics. -- Daniel T. Rodgers Journal of Economic History Protecting Soldiers and Mothers is doubly important because it gives us new facts to think about and new perspectives within which to think about them...Skocpol's research is so original and thorough and her critical intelligence is so strong...that her book will become the necessary starting point for all who study the evolution of social welfare policies in the United States. -- Aaron Wildavsky Journal of Policy History

Theda Skocpol is Victor S. Thomas Professor of Government and Sociology at Harvard University. Her previous works include the prize-winning States and Social Revolutions.

* Introduction: Understanding the Origins of Modern Social Provision in the United States * Part I: A Precocious Social Spending Regime *1. Patronage Democracy and Distributive Public Policies in the Nineteenth Century *2. Public Aid for the Worthy Many: The Expansion of Benefits for Veterans of the Civil War * Part II: The Failure of a Paternalist Welfare State *3. Reformist Professionals as Advocates of Workingmen's Insurance *4. Help for the "Army of Labor"? Trade Unions and Social Legislation *5. Progressive Era Politics and the Defeat of Social Policies for Workingmen and the Elderly * Part III: Foundations for a Maternalist Welfare State? *6. Expanding the Separate Sphere: Women's Civic Action and Political Reforms in the Early Twentieth Century *7. Safeguarding the "Mothers of the Race": Protective Legislation for Women Workers *8. An Unusual Victory for Public Benefits: The "Wildfire Spread" of Mothers' Pensions *9. Statebuilding for Mothers and Babies: The Children's Bureau and the Sheppard-Towner Act * Conclusion: America's First Modern Social Policies and Their Legacies * Appendix 1: Percentages of the Elderly in the States and the District of Columbia Receiving Civil War Pensions in 1910 * Appendix 2: Endorsements of Mothers' Pensions by Women's Groups: Sources for Table 9 and Figure 27 * Notes * Index