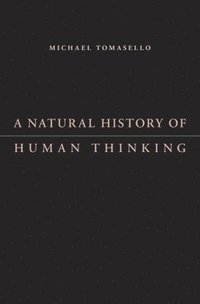 A Natural History of Human Thinking

av Michael Tomasello
Inbunden Engelska, 2014-02-17
375
Köp
Spara som favorit
Finns även som
Visa alla 3 format & utgåvor
Tool-making or culture, language or religious belief: ever since Darwin, thinkers have struggled to identify what fundamentally differentiates human beings from other animals. In this much-anticipated book, Michael Tomasello weaves his twenty years of comparative studies of humans and great apes into a compelling argument that cooperative social interaction is the key to our cognitive uniqueness. Once our ancestors learned to put their heads together with others to pursue shared goals, humankind was on an evolutionary path all its own. Tomasello argues that our prehuman ancestors, like today's great apes, were social beings who could solve problems by thinking. But they were almost entirely competitive, aiming only at their individual goals. As ecological changes forced them into more cooperative living arrangements, early humans had to coordinate their actions and communicate their thoughts with collaborative partners. Tomasello's "shared intentionality hypothesis" captures how these more socially complex forms of life led to more conceptually complex forms of thinking. In order to survive, humans had to learn to see the world from multiple social perspectives, to draw socially recursive inferences, and to monitor their own thinking via the normative standards of the group. Even language and culture arose from the preexisting need to work together. What differentiates us most from other great apes, Tomasello proposes, are the new forms of thinking engendered by our new forms of collaborative and communicative interaction. A Natural History of Human Thinking is the most detailed scientific analysis to date of the connection between human sociality and cognition.
Visa hela texten

What makes human thinking unique? Michael Tomasello's clear and elegant new book demonstrates once more his ability to draw on his experimental work with apes and children to offer major new insights into the evolutionary origins of human cognition. -- Dan Sperber, Centre National de la Recherche Scientifique, Paris Human thought, in Tomasello's conception, is different from that of all other organisms because humans alone have the capacity to think about the thoughts of others, and do so collectively. Tomasello's greatest strength is his insistence on relying on data to support his hypotheses, particularly the fascinating studies he summarizes comparing pre- linguistic children to our great ape relatives. * Publishers Weekly * What is it that differentiates humans from other animals? It's the question that keeps evolutionary anthropologists like Michael Tomasello up nights. But after 20-plus years wrestling with the thorny subject, he puts forward his 'shared intentionality hypothesis,' designed to account for how early humans learned to coordinate their actions and communicate their thoughts with collaborators. * New Scientist * Tomasello has spent a lifetime conducting...tests on both great apes such as chimpanzees and on humans of different ages, in order to pin down exactly where our capacities differ. In this difficult but rewarding book, he attempts to place these results into a grand theory of how and why these differences evolved...Tomasello's account of how co-operation drove the development of our distinctive intellect is controversial...It is also highly speculative: a trait such as co-operation leaves few traces in the fossil record. But it is speculation by a thinker at the top of his field, based on the latest research, and as such is likely to be the definitive statement of human uniqueness for some time to come. -- Stephen Cave * Financial Times * Tomasello argues that human thinking is unique because it is cooperative. He posits that environmental upheavals forced early humans to channel their thinking towards collective aims through two evolutionary innovations: collaboration while foraging, and the rise of culture as population and competition burgeoned. Tomasello convincingly sets out how 'shared intentionality,' in which social complexity spawned conceptual complexities, sets us apart. * Nature * Michael Tomasello is one of the few psychologists to have conducted intensive research on both human children and chimpanzees, and A Natural History of Human Thinking reflects not only the insights enabled by such cross-species comparisons but also the wisdom of a researcher who appreciates the need for asking questions whose answers generate biological insight. His book helps us to understand the differences, as well as the similarities, between human brains and other brains. -- David P. Barash * Wall Street Journal * Compelling reading...In a reassessment of his earlier work, Tomasello argues that apes are cognitively much closer to humans than had been thought only a decade ago...The book's great virtue is its conceptual analysis of the cumulative steps in cognition required to get us from ape to human...Highly stimulating. -- Stephen Levinson * Science *