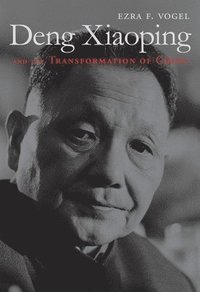 Deng Xiaoping and the Transformation of China

av Ezra F Vogel
Häftad Engelska, 2013-10-14
294
Köp
Spara som favorit
Kan levereras innan julafton!
Finns även som
Visa alla 2 format & utgåvor
Winner of the Lionel Gelber Prize National Book Critics Circle Award Finalist An Economist Best Book of the Year | A Financial Times Book of the Year | A Wall Street Journal Book of the Year | A Washington Post Book of the Year | A Bloomberg News Book of the Year | An Esquire China Book of the Year | A Gates Notes Top Read of the Year Perhaps no one in the twentieth century had a greater long-term impact on world history than Deng Xiaoping. And no scholar of contemporary East Asian history and culture is better qualified than Ezra Vogel to disentangle the many contradictions embodied in the life and legacy of China's boldest strategist. Once described by Mao Zedong as a "needle inside a ball of cotton," Deng was the pragmatic yet disciplined driving force behind China's radical transformation in the late twentieth century. He confronted the damage wrought by the Cultural Revolution, dissolved Mao's cult of personality, and loosened the economic and social policies that had stunted China's growth. Obsessed with modernization and technology, Deng opened trade relations with the West, which lifted hundreds of millions of his countrymen out of poverty. Yet at the same time he answered to his authoritarian roots, most notably when he ordered the crackdown in June 1989 at Tiananmen Square. Deng's youthful commitment to the Communist Party was cemented in Paris in the early 1920s, among a group of Chinese student-workers that also included Zhou Enlai. Deng returned home in 1927 to join the Chinese Revolution on the ground floor. In the fifty years of his tumultuous rise to power, he endured accusations, purges, and even exile before becoming China's preeminent leader from 1978 to 1989 and again in 1992. When he reached the top, Deng saw an opportunity to creatively destroy much of the economic system he had helped build for five decades as a loyal follower of Mao-and he did not hesitate.
Visa hela texten

A masterful new history of China's reform era. It pieces together from interviews and memoirs perhaps the clearest account so far of the revolution that turned China from a totalitarian backwater led by one of the monsters of the 20th century into the power it has become today...Vogel has a monumental story to tell. His main argument is that Deng deserves a central place in the pantheon of 20th-century leaders. For he not only launched China's market-oriented economic reforms but also accomplished something that had eluded Chinese leaders for almost two centuries: the transformation of the world's oldest civilization into a modern nation...[An] illuminating book. -- John Pomfret * Washington Post * Ezra Vogel's new biography portrays Deng as not just the maker of modern China, but one of the most substantial figures in modern history...[A] meticulously researched book...Vogel knows China's elites extremely well, not least because of his years as an intelligence officer in East Asia for the Clinton administration. This book is bolstered by insider knowledge and outstanding sources, such as interviews with Deng's interpreters...The definitive account of Deng in any language. Vogel eloquently makes the case for Deng's crucial role in China's transformation from an impoverished and brutalized country into an economic and political superpower. * The Economist * A lively portrait of the man...Vogel provides a wealth of fascinating material, from vivid accounts of Deng's political and organizational skills in reviving the economy in the mid-1970s to his up-and-down relations with Vietnam and its leaders. The author also offers astute insights into the reformist roles played by Hua Guofeng, Mao's immediate successor after his 1976 death, and by two of Deng's own associates, both ultimately purged by him, Hu Yaobang and Zhao Ziyang. The book is at its best in portraying the tense interplay of personal relations and ambition among Mao's many lieutenants. On the surface, lockstep Communist ideology prevailed during Mao's rule, but behind the walls of Zhongnanhai, Beijing's central leadership compound, the dual drive for self-preservation and advancement fed a kind of political nihilism. -- Howard French * Wall Street Journal * When Chinese historians are able one day to ply their subversive trade without control or censorship, their judgment will surely be that their country should revere Deng Xiaoping way above his predecessor Mao Zedong...Ezra Vogel's massive biography assembles the case for Deng (1904-97) with narrative skill and prodigious scholarship. -- Chris Patten * Financial Times * Vogel has gone to enormous lengths to document his subject...Vogel's painstaking research provides plenty of fascinating detail. The description of the period after Tiananmen, for example--when the octogenarian was forced to call on a lifetime's accumulated political wiles to defeat an attempt by conservatives to almost completely reverse his reforms--is eye-opening. The pages in which Deng effectively threatens to have then Communist Party Secretary Jiang Zemin dismissed unless he throws his support behind renewing the reform drive are very nearly worth the price of the book alone...On the ways through which Deng set about the enormous task of rebuilding the gutted economy, shattered by decades of turmoil under Mao Zedong, Vogel is exhaustive. -- Simon Elegant * Time * Ezra Vogel's encyclopedic Deng Xiaoping and the Transformation of China is the most exhaustive English retelling of Deng's life. Vogel, an emeritus professor at Harvard, seems to have interviewed or found the memoirs of nearly every person who spoke with Deng, and has painstakingly re-created a detailed and intimate chronology of Deng's roller-coaster career. -- Joshua Kurlantzick * The Nation * A virtue of Vogel's book is that it collects and organizes a huge amount of material on the struggles within the elite power circles in China over several decades. In these accounts we learn h

Ezra F. Vogel (1930-2020) is the author of Deng Xiaoping and the Transformation of China, a finalist for the National Book Critics Circle Award and winner of the Lionel Gelber Prize, and of the international bestseller Japan as Number One. He was Henry Ford II Professor of the Social Sciences Emeritus at Harvard University.