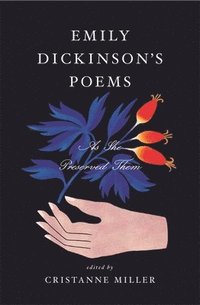 As She Preserved Them

av Emily Dickinson, Cristanne Miller
Inbunden Engelska, 2016-04-28
319
Bevaka
Spara som favorit
Tillfälligt slut – klicka "Bevaka" för att få ett mejl så fort boken går att köpa igen.
Widely considered the definitive edition of Emily Dickinson's poems, this landmark collection presents her poems here for the first time "as she preserved them," and in the order in which she wished them to appear. It is the only edition of Dickinson's complete poems to distinguish clearly those she took pains to copy carefully onto folded sheets in fair hand-presumably to preserve them for posterity-from the ones she kept in rougher form. It is also unique among complete editions in presenting the alternate words and phrases Dickinson chose to use on the copies of the poems she kept, so that we can peer over her shoulder and see her composing and reworking her own poems. The world's foremost scholar of Emily Dickinson, Cristanne Miller, guides us through these stunning poems with her deft and unobtrusive notes, helping us understand the poet's quotations and allusions, and explaining how she composed, copied, and circulated her poems. Miller's brilliant reordering of the poems transforms our experience of them. A true delight, this award-winning collection brings us closer than we have ever been to the writing practice of one of America's greatest poets. With its clear, uncluttered page and beautiful production values, it is a gift for students of Emily Dickinson and for anyone who loves her poems.
Visa hela texten

This book brings us as close as we can get to how [Dickinson] presented her work... Sparing us the task of deciphering the poet's sometimes challenging handwriting and presenting intriguing variants, this edition demonstrates why generations of writers have been galvanized by Dickinson... This edition brings us that much nearer to what this exceedingly decisive and willful writer wanted. It sweeps away distractions caused by posthumous fame, leaving us with the poems themselves... Closer than previous editions to Dickinson's wishes, priorities and personality, Emily Dickinson's Poems: As She Preserved Them calls for no redundant plays, films, novels or warbling. What remains is lightning bolts of language akin to the trouvailles of Arthur Rimbaud and other powerful magicians of verse. -- Benjamin Ivry * Literary Review * Reading the volume straight through, it's a pleasure to discover and re-discover Dickinson's odd metaphors and strange sounds in poems that oscillate between whimsical riddle and hard-nosed philosophical meditation... Emily Dickinson's Poems delivers. -- Micah Mattix * Washington Free Beacon * Miller's edition gives us something like the Collected Poems Dickinson might have published in different circumstances. An invaluable book for Dickinson scholars and general readers alike. -- Bonnie Costello, Boston University A remarkable new resource in a wonderfully accessible format. This edition offers readers a print version of the manuscript poems Dickinson retained and that, Miller argues, Dickinson preserved for posterity. -- Paul Crumbley, Utah State University This new edition of Dickinson's poems attempts nothing less than to shift the center of gravity and value in present-day Dickinson studies back to the fascicles, the poet's own 'manuscript books.' Miller has done the community of general readers as well as scholars a huge service in compiling this edition. -- Mary Loeffelholz, Northeastern University Miller chooses rightly not to number Dickinson's poems, as previous editors have done, and allows them instead to name themselves in their first lines. More importantly, though, she does make a convincing case for Dickinson's having wanted to preserve and organize her works as poems, to decide, for the most part, on their finished forms. -- Fiona Green * Times Literary Supplement * Cristanne Miller's edition of Emily Dickinson's Poems: As She Preserved Them is surely the best poetry book of all this past year. Who'd have expected such a surprising, new and fruitful way to read the great poet? -- Don Share * Irish Times * [Dickinson's] 'fluid' approach to poetic composition [is] clarified in Cristanne Miller's painstaking new edition of Dickinson's poems. -- Christopher Benfey * New York Review of Books * Miller's approach works well, not only to give readers agency, but also to show Dickinson's thought process...Miller crafts an edition that artfully accommodates Dickinson's process of continuously reworking poems. -- Meg Schoerke * Hudson Review *

Cristanne Miller is SUNY Distinguished Professor and Edward H. Butler Professor of Literature at the University at Buffalo in New York and past editor of the Emily Dickinson Journal and President of the Emily Dickinson International Society. Celebrated as one of the world's leading scholars of Dickinson, she is the author of Emily Dickinson: A Poet's Grammar, which has been hailed as a major scholarly achievement, among other books.