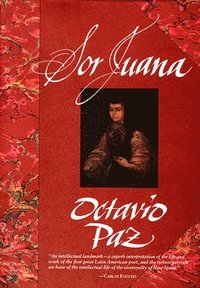 Or, the Traps of Faith

av Octavio Paz
Häftad Engelska, 1990-01-01
489
Köp
Spara som favorit
Skickas inom 7-10 vardagar.
Gratis frakt inom Sverige över 159 kr för privatpersoner.
Mexico's leading poet, essayist, and cultural critic writes of a Mexican poet of another time and another world, the world of seventeenth-century New Spain. His subject is Sor Juana Ines de la Cruz, the most striking figure in all of Spanish-American colonial literature and one of the great poets of her age. Her life reads like a novel. A spirited and precocious girl, one of six illegitimate children, is sent to live with relatives in the capital city. She becomes known for her beauty, wit, and amazing erudition, and is taken into the court as the Vicereine's protegee. For five years she enjoys the pleasures of life at court--then abruptly, at twenty, enters a convent for life. Yet, no recluse, she transforms the convent locutory into a literary and intellectual salon; she amasses an impressive library and collects scientific instruments, reads insatiably, composes poems, and corresponds with literati in Spain. To the consternation of the prelates of the Church, she persists in circulating her poems, redolent more of the court than the cloister. Her plays are performed, volumes of her poetry are published abroad, and her genius begins to be recognized throughout the Hispanic world. Suddenly she surrenders her books, forswears all literary pursuits, and signs in blood a renunciation of secular learning. The rest is silence. She dies two years later, at forty-six. Octavio Paz has long been intrigued by the enigmas of Sor Juana's personality and career. Why did she become a nun? How could she renounce her lifelong passion for writing and learning? Such questions can be answered only in the context of the world in which she lived. Paz gives a masterly portrayal of the life and culture of New Spain and the political and ideological forces at work in that autocratic, theocratic, male-dominated society, in which the subjugation of women was absolute. Just as Paz illuminates Sor Juana's life by placing it in its historical setting, so he situates her work in relation to the traditions that nurtured it. With critical authority he singles out the qualities that distinguish her work and mark her uniqueness as a poet. To Paz her writings, like her life, epitomize the struggle of the individual, and in particular the individual woman, for creative fulfillment and self-expression.
Visa hela texten

Sor Juana displays an extraordinary sweep of imagination and intelligence, and it is many things: a biography, a critical study, a re-creation of an era, a meditation on Mexican history, a dialogue of poet with poet, a reflection on the role of the intellectual in the modern world. -- Michael Wood New York Review of Books An admiring and sympathetic portrait, but an honest and demythologizing one, too...The Sor Juana Mr. Paz renders is irreducible to labels--saint, iconoclast, virago, feminist, neurotic. Her life, like the Viceregal culture that formed her and was formed by her, was brilliant, flawed and complex. She argued passionately for sexual equality and intellectual freedom, yet championed the same orthodoxies with which she struggled. -- Frederick Luciani New York Times Book Review A sweeping and volcanic panorama. -- Richard Eder Los Angeles Times Book Review

Octavio Paz was the author of more than forty volumes of poetry and prose.

Prologue: History, Life, Work Part One: THE KINGDOM OF NEW SPAIN 1. A Unique Society 2. The Dais and the Pulpit 3. Syncretism and Empire 4. A Transplanted Literature Part Two: JUANA RAMIREZ, 1648-11668 5. The Ramirez Family 6. May Syllables Be Composed by the Stars 7. The Trials of Juana Ines 8. Taking the Vows Part Three: SOR JUANA INES DE LA CRUZ, 1669-1679 9. Life in the Convent 10. Political Rites 11. The World as Hieroglyph 12. Sister Juana and the Goddess Isis Part Four: SOR JUANA INES DE LA CRUZ, 1680-1690 13. Flattery and Favors 14. Council of Stars 15. Religious Fires 16. The Reflection, the Echo 17. Realm of Signs 18. Different from Herself Part Five: THE TENTH MUSE 19. Hear Me with Your Eyes 20. Ink on Wings of Paper 21. Music Box 22. The Stage and the Court 23. The Float and the Sacrament 24. First Dream Part Six: THE TRAPS OF FAITH 25. An Ill-Fated Letter 26. The Response 27. And the Responses 28. The Siege 29 The Abjuration Epilogue Toward a Restitution Appendix Sor Juana: Witness for the Prosecution Notes on Sources Spanish Literary Terms Notes Index