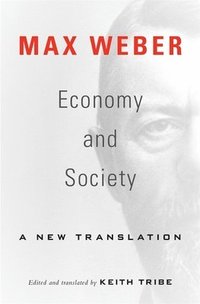 av Max Weber
Häftad Engelska, 2019-04-26
301
Köp
Spara som favorit
Kan tyvärr inte längre levereras innan julafton.
The definitive new translation of Max Weber's classic work of social theory-arguably the most important book by the foremost social theorist of the twentieth century. Max Weber's Economy and Society is the foundational text for the social sciences of the twentieth and twenty-first centuries, presenting a framework for understanding the relations among individual action, social action, economic action, and economic institutions. It also provides a classification of political forms based upon "systems of rule" and "rulership" that has shaped debate about the nature and role of charisma, tradition, legal authority, and bureaucracy. Keith Tribe's major new translation presents Economy and Society as it stood when Weber died in June 1920, with three complete chapters and a fragment of a fourth. One of the English-speaking world's leading experts on Weber's thought, Tribe has produced a uniquely clear and faithful translation that balances accuracy with readability. He adds to this a substantial introduction and commentary that reflect the new Weber scholarship of the past few decades. This new edition will become the definitive translation of one of the few indisputably great intellectual works of the past 150 years.
Visa hela texten

Max Weber is out of style...It is about time for a reappraisal, and an excellent opportunity has been provided in the form of Keith Tribe's new translation of Weber's masterpiece. -- Nick Burns * New Criterion * Keith Tribe is one of the best Weberians around, and has been for decades. This excellent translation will make Max Weber's work more readily available to a new generation of scholars. Weber's major ideas never go stale, and Tribe's translation will assure reliable access to them. -- Alan Sica, Pennsylvania State University Harvard University Press could not have found a better translator than Keith Tribe for this project, and no Anglophone writer knows Weber better. Tribe has produced a fine translation that will help the non-specialist appreciate the greatness of Weber's work. -- Peter Baehr, Lingnan University, Hong Kong The great Anglo-American tradition of Max Weber translation has never been more necessary than today, when English is the near-universal language of the academy and the German-language understanding of Weber has recently undergone a revolution. Keith Tribe brings us up to date with a new and appropriately revolutionary re-presentation of Max Weber's final text of Economy and Society. In the 1960s Economy and Society was said to be the ABC of sociological theory; now we can see it is the Everest. -- Peter Ghosh, University of Oxford Generations of sociologists have thought they really understood what Max Weber was really doing in writing Economy and Society. Historians have long known this is more mythology than reality. And Keith Tribe has been one of the leading figures in putting back into proper context the emergence of those bits of text we can be certain that Weber was most on top of before he died. Tribe's introduction to this volume is exemplary, letting us see quite how original and still surprising the first several chapters of Weber's approach to action, interpretation, meaning and the conceptual construction of the economy are. Furthermore, his new translation, with its greater fidelity to the original texts and clarity in its presentation of Weber's emphatic and didactic intent, effectively gives English-language readers a completely new text, and thus a new Weber, to grapple with. -- Duncan Kelly, University of Cambridge

Keith Tribe is a leading authority on Weber, a noted historian of economic and social thought, and an accomplished translator.