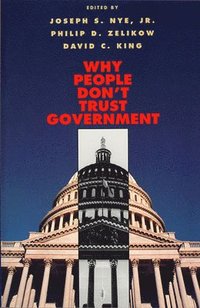 av Joseph S Nye
Häftad Engelska, 1997-10-01
569
Köp
Spara som favorit
Skickas inom 5-8 vardagar.
Fri frakt inom Sverige för privatpersoner.
Confidence in American government has been declining for three decades. Three-quarters of Americans said they trusted the Federal government to do the right thing in 1964. Today, only a quarter do. Why the decline? Is this mistrust a healthy reflection of America's long-lasting skepticism of a strong state? Is mistrust a problem for the future of governance? Bringing together essays by leading Harvard scholars, this book explores the roots of mistrust. It first examines government's current scope, its actual performance, and citizens' perceptions of its performance. It then assesses many possible explanations that have been offered for the decline of trust, including the end of the Cold War, elevated expectations following World War II, a weakened economy, the effects of globalization, resentment over political scandals, and incompetence of bureaucrats. The book clarifies thinking about the sources of public disaffection. Mistrust, the contributors find, is largely unrelated to national economic conditions, to challenges of a global economy, to the Cold War, or to bumbling bureaucrats and venal politicians. Rather, they show that the most likely culprits are all around us--an interacting blend of cultural and political conflicts stirred by an increasingly corrosive news media.
Visa hela texten

[Why People Don't Trust Government], and its subject matter, are being taken seriously in the highest political circles on both sides of the Atlantic. Nye was among a group of American experts led by Hillary Clinton who recently came to Britain for a seminar on the book attended by, among others, Tony Blair, who left clutching a copy. Nye could hardly be better qualified for his subject. As well as studying government, he has practised it, serving for two years (1977-79) as undersecretary of state for security assistance, science and technology during the Carter administration and then in two posts under Clinton, first as Chairman of the National Intelligence Council and then (1994-95) at defence. -- Huw Richards Times Higher Education Supplement This book is the best single exploraton of a disturbing phenomenon in American life: a persistent, long-term decline in people's confidence in government. By placing more than a dozen possible explanations under a microscope, the authors have not only sorted out the most likely causes of the decline, but have also formulated a strong agenda for future research. For those seeking to adapt our governmental institutions to a third industrial revolution, as we must, this book provides invaluable understandings. -- David Gergen, Editor-at-Large U.S. News and World Report This is an important book about an important question: Why do Americans distrust their national government more today than they did three decades ago?...[This] volume is likely to be the benchmark book for future studies of dissatisfaction with government...This is the first of several publications that will report results of a multiyear research program, The Visions Project, being undertaken by the Kennedy School of Government at Harvard University. -- E.C. Dreyer Choice