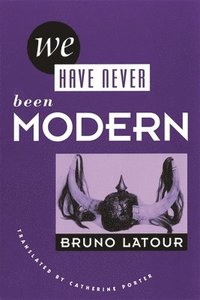 We Have Never Been Modern

av Bruno Latour
Häftad Engelska, 1993-10-01
315
Köp
Spara som favorit
Skickas inom 7-10 vardagar.
Gratis frakt inom Sverige över 159 kr för privatpersoner.
Finns även som
Visa alla 1 format & utgåvor
With the rise of science, we moderns believe, the world changed irrevocably, separating us forever from our primitive, premodern ancestors. But if we were to let go of this fond conviction, Bruno Latour asks, what would the world look like? His book, an anthropology of science, shows us how much of modernity is actually a matter of faith. What does it mean to be modern? What difference does the scientific method make? The difference, Latour explains, is in our careful distinctions between nature and society, between human and thing, distinctions that our benighted ancestors, in their world of alchemy, astrology, and phrenology, never made. But alongside this purifying practice that defines modernity, there exists another seemingly contrary one: the construction of systems that mix politics, science, technology, and nature. The ozone debate is such a hybrid, in Latour's analysis, as are global warming, deforestation, even the idea of black holes. As these hybrids proliferate, the prospect of keeping nature and culture in their separate mental chambers becomes overwhelming-and rather than try, Latour suggests, we should rethink our distinctions, rethink the definition and constitution of modernity itself. His book offers a new explanation of science that finally recognizes the connections between nature and culture-and so, between our culture and others, past and present. Nothing short of a reworking of our mental landscape, We Have Never Been Modern blurs the boundaries among science, the humanities, and the social sciences to enhance understanding on all sides. A summation of the work of one of the most influential and provocative interpreters of science, it aims at saving what is good and valuable in modernity and replacing the rest with a broader, fairer, and finer sense of possibility.
Visa hela texten

An interesting and deeply thought-out presentation of the large scale problems of our world seen in relation to the idea of 'modernism.' The book focuses on the interrelationships between three large-scale domains: science and technology, politics and government, language and semiotic studies... Latour examines the premodernists, postmodernists, antimodernists, and so-called modernists and concludes that we really never were modern and now need to pursue a form of modernism (which he describes) purged of its counterproductive features.--Choice If you like the kind of antidualist philosophizing that keeps trying to break down the distinctions between subject and object, mind and body, language and fact, and so on, you'll love Latour... He does the best job so far of breaking down the distinctions between making and finding, between nature and history, and between the 'premodern, ' 'the modern' and 'the postmodern.'--Richard Rorty "Common Knowledge " The present book is essentially a work of metaphysics, a kind of political ontology. Latour's goal is to break down traditional philosophical categories of nature, power and language... Latour's insights are abundant, from his advocacy of multinaturalism (versus multiculturalism) to his call for social theorists to recognize the historicity of objects... This is a wonderful book to disagree with--a refreshing break from the straight-jacketed sycophancy that defines so much of the history and philosophy of science. It is not an easy book, but the reward for the philosophically minded is well worth the wrestle.--Robert N. Proctor "American Scientist " [Latour] stakes out an original and important position in current debates about modernity, antimodernity, postmodernity, and so on. These debates can only be enriched by Latour's attention to the practical coupling of the human and the nonhuman, and they can only be enlivened by the thumbnail critiques offered along the way of thinkers as diverse as Kant, Hegel, Bachelard, Habermas, Baudrillard, Lyotard, and Heidegger.--Andrew Pickering "Modernism "

Bruno Latour is Professor at Sciences Po, Paris, and the 2013 winner of the Ludvig Holberg International Memorial Prize.