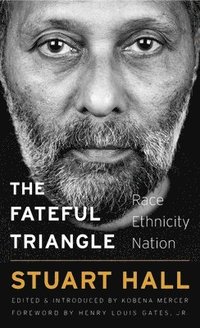 av Stuart Hall
Inbunden Engelska, 2017-09-29
229
Köp
Spara som favorit
Skickas inom 7-10 vardagar.
Fri frakt inom Sverige för privatpersoner.
Finns även som
Visa alla 2 format & utgåvor
In The Fateful Triangle-drawn from lectures delivered at Harvard University in 1994-one of the founding figures of cultural studies reflects on the divisive, often deadly consequences of our contemporary politics of identification. As he untangles the power relations that permeate categories of race, ethnicity, and nationhood, Stuart Hall shows how old hierarchies of human identity in Western culture were forcefully broken apart when oppressed groups introduced new meanings to the representation of difference. From the Renaissance to the Enlightenment, the concept of race stressed distinctions of color as fixed and unchangeable. But for Hall, twentieth-century redefinitions of blackness reveal how identities and attitudes can be transformed through the medium of language itself. Like the "badge of color" W. E. B. Du Bois evoked in the anticolonial era, "black" became a sign of solidarity for Caribbean and South Asian migrants who fought discrimination in 1980s Britain. Hall sees such manifestations of "new ethnicities" as grounds for optimism in the face of worldwide fundamentalisms that respond with fear to social change. Migration was at the heart of Hall's diagnosis of the global predicaments taking shape around him. Explaining more than two decades ago why migrants are the target of new nationalisms, Hall's prescient vision helps us to understand today's crisis of liberal democracy. As he challenges us to find sustainable ways of living with difference, Hall gives us the concept of diaspora as a metaphor with which to enact fresh possibilities for redefining nation, race, and identity in the twenty-first century.
Visa hela texten

Given the current political conditions, these lectures on race, ethnicity, and nation, delivered by Stuart Hall almost a quarter of a century ago, may be even more timely today. He has left us a vital legacy of intellectual passion, analytical rigor, and political prescience that should be heeded, especially now, by progressive scholars and activists.--Angela Y. Davis, University of California, Santa Cruz In this long awaited work, Stuart Hall, the invisibly Jamaican co-founder of British cultural studies, powerfully interrogates what is, simultaneously, the central dilemma of transatlantic black cultures and one of the most acute paradoxes of modern times. He bracingly confronts the persistence of race--and its confounding liberal surrogates, ethnicity and nation--as a marker of identification, a fervently embraced 'sliding signifier' among blacks and other formerly subaltern peoples, in spite of its scientific invalidation and horrendous past. This is a profoundly humane work that not only integrates African-American and Anglo-Caribbean cultural studies, but finds room for hope and change in the discursive nature of their subject.--Orlando Patterson These lectures are a vital contribution to Stuart Hall's enduring vocation to find a critical voice which is, in equal measure, just and generous, reflective and transformative. Marked by struggle and sobriety, this important work makes a significant contribution to a vision of community and an ethics of solidarity.--Homi K. Bhabha Promises to be essential reading for those seeking to understand Hall's tremendous impact on scholars, artists, and filmmakers on both sides of the Atlantic.--Glenn Ligon"Artforum" (06/01/2017) Hall's main argument rests on the notion that the greatest problem of the 21st century is living with and understanding differences...The Fateful Triangle makes me recall the need to constantly question, interrogate and dismantle how we understand hierarchies of difference and identity; and how the position of outsiders is always part of a larger political question.--Kalwant Bhopal"Times Higher Education" (09/21/2017)

Stuart Hall (1932-2014) was Professor of Sociology at the Open University, the founding editor of New Left Review, and Director of the Centre for Contemporary Cultural Studies at the University of Birmingham. Kobena Mercer is Professor of History of Art and African American Studies at Yale University. Henry Louis Gates, Jr., is Alphonse Fletcher University Professor and the Director of the W. E. B. Du Bois Research Institute at the Hutchins Center for African and African American Research at Harvard University.