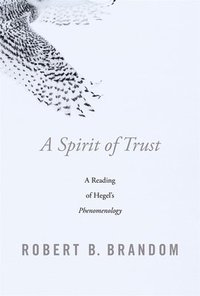 A Spirit of Trust

A Reading of Hegel's <i>Phenomenology</i>

av Robert B Brandom
Inbunden Engelska, 2019-05-31
399
Köp
Spara som favorit
Skickas inom 5-8 vardagar.
Fri frakt inom Sverige för privatpersoner.
Forty years in the making, this long-awaited reinterpretation of Hegel's The Phenomenology of Spirit is a landmark contribution to philosophy by one of the world's best-known and most influential philosophers. In this much-anticipated work, Robert Brandom presents a completely new retelling of the romantic rationalist adventure of ideas that is Hegel's classic The Phenomenology of Spirit. Connecting analytic, continental, and historical traditions, Brandom shows how dominant modes of thought in contemporary philosophy are challenged by Hegel. A Spirit of Trust is about the massive historical shift in the life of humankind that constitutes the advent of modernity. In his Critiques, Kant talks about the distinction between what things are in themselves and how they appear to us; Hegel sees Kant's distinction as making explicit what separates the ancient and modern worlds. In the ancient world, normative statuses-judgments of what ought to be-were taken to state objective facts. In the modern world, these judgments are taken to be determined by attitudes-subjective stances. Hegel supports a view combining both of those approaches, which Brandom calls "objective idealism": there is an objective reality, but we cannot make sense of it without first making sense of how we think about it. According to Hegel's approach, we become agents only when taken as such by other agents. This means that normative statuses such as commitment, responsibility, and authority are instituted by social practices of reciprocal recognition. Brandom argues that when our self-conscious recognitive attitudes take the radical form of magnanimity and trust that Hegel describes, we can overcome a troubled modernity and enter a new age of spirit.
Visa hela texten

Brandom's goal is to make Hegel explicable to a new audience, to make the importance of his philosophy plain and to further develop his own impressive body of work. He has succeeded, and his success throws up fascinating questions for both American philosophy and critical theory.-- (08/19/2019) This long-awaited book has been thirty years in the making. Brandom's A Spirit of Trust aspires to do for Hegel's The Phenomenology of Spirit what Strawson's The Bounds of Sense did for Kant's The Critique of Pure Reason to transpose a seminal work of German Idealism into the terminological idiom and argumentative key of anglophone analytic philosophy--not only to render a past classic newly available to the present, but to transform the philosophical present through such a re-inheritance of its past.--James Conant, University of Chicago A Spirit of Trust will be the book that finally moves analytic philosophy from its Kantian phase to its Hegelian phase. Brandom has succeeded in bridging both the history-systematic and the continental-analytic divides in contemporary philosophy. To say that this book is highly anticipated would be a gross understatement.--Dean Moyar, Johns Hopkins University

Bloggat om A Spirit of Trust

Robert B. Brandom is Distinguished Professor of Philosophy at the University of Pittsburgh and a Fellow of both the American Academy of Arts and Sciences and the British Academy. Numerous books have been written about him, including Jeremy Wanderer's Robert Brandom, Ronald Loeffler's Brandom, and Chauncey Maher's The Pittsburgh School of Philosophy: Sellars, McDowell, Brandom. He delivered the John Locke Lectures at the University of Oxford and the Woodbridge Lectures at Columbia University. Brandom is the author of many books, including Making It Explicit; Reason in Philosophy; and From Empiricism to Expressivism.