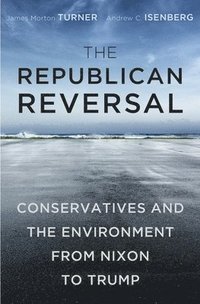 Conservatives and the Environment from Nixon to Trump

av James Morton Turner, Andrew C Isenberg
Inbunden Engelska, 2018-11-30
308
Köp
Spara som favorit
Skickas inom 5-8 vardagar.
Fri frakt inom Sverige för privatpersoner.
Finns även som
Visa alla 1 format & utgåvor
Not long ago, Republicans could take pride in their party's tradition of environmental leadership. In the late 1960s and early 1970s, the GOP helped to create the Environmental Protection Agency, extend the Clean Air Act, and protect endangered species. Today, as Republicans denounce climate change as a "hoax" and seek to dismantle the environmental regulatory state they worked to build, we are left to wonder: What happened? In The Republican Reversal, James Morton Turner and Andrew C. Isenberg show that the party's transformation began in the late 1970s, with the emergence of a new alliance of pro-business, libertarian, and anti-federalist voters. This coalition came about through a concerted effort by politicians and business leaders, abetted by intellectuals and policy experts, to link the commercial interests of big corporate donors with states'-rights activism and Main Street regulatory distrust. Fiscal conservatives embraced cost-benefit analysis to counter earlier models of environmental policy making, and business tycoons funded think tanks to denounce federal environmental regulation as economically harmful, constitutionally suspect, and unchristian, thereby appealing to evangelical views of man's God-given dominion of the Earth. As Turner and Isenberg make clear, the conservative abdication of environmental concern stands out as one of the most profound turnabouts in modern American political history, critical to our understanding of the GOP's modern success. The Republican reversal on the environment is emblematic of an unwavering faith in the market, skepticism of scientific and technocratic elites, and belief in American exceptionalism that have become the party's distinguishing characteristics.
Visa hela texten

Juxtaposes the conservative and environmental movements in the 1960s, offering new insights into their coevolution...A well-written account of the Republican Party's dramatic transformation on environmental policy over the past 40 years.--Neal D. Woods"Science" (11/05/2018) The Republican Reversal is a timely and compelling analysis of why climate change has become the most polarizing issue in American politics. It is a must-read for anyone hopeful that the United States might once again be an environmental leader.--Adam Rome, author of The Genius of Earth Day: How a 1970 Teach-In Unexpectedly Made the First Green Generation A well-researched, fair-minded, and often surprising explanation of a stark transformation that will affect us all, The Republican Reversal should interest everyone who cares deeply about the quality of the air we breathe and the water we drink. It will particularly fascinate GOP voters wondering why their party's leaders started misinforming the public on climate science just as action became urgent for the planet we bequeath to our children and grandchildren.--Nancy MacLean, author of Democracy in Chains: The Deep History of the Radical Right's Stealth Plan for America For anyone who wants to understand how the GOP, once populated by legions of environmental stalwarts, became the science-denying, fossil fuel-fancying Party of No on environmental protections, Turner and Isenberg have written a must-read book.--David Farber, author of The Rise and Fall of Modern American Conservatism In the 1970s the politics of conservatism and conservationism were intertwined, but in recent decades the Republican Party has transformed itself from an ally of environmentalism to its avowed enemy. In their fascinating The Republican Reversal, Turner and Isenberg chronicle the significant changes inside the party and the staggering consequences for the nation.--Kevin M. Kruse, author of One Nation Under God: How Corporate America Invented Christian America

James Morton Turner is Associate Professor of Environmental Studies at Wellesley College. His first book, The Promise of Wilderness: American Environmental Politics since 1964, received the Charles A. Weyerhaeuser Book Award for the best book in conservation history by the Forest History Society in 2013. Turner has received grants from the National Endowment for the Humanities and the National Science Foundation in support of his research in environmental history, politics, and policy. Turner has also been active in local sustainability initiatives in Massachusetts. Andrew C. Isenberg is the Hall Distinguished Professor of American History at the University of Kansas and the author of many books about the American West and the environment. He has been a Fulbright Scholar, an inaugural fellow at the Rachel Carson Center for Environment and Society in Munich, and a contributor to documentaries, including America before Columbus and the award-winning Facing the Storm: Story of the American Bison and American Experience: Wyatt Earp.