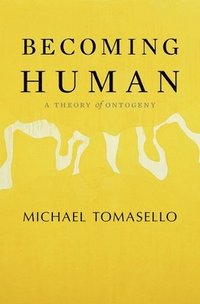 A Theory of Ontogeny

av Michael Tomasello
Inbunden Engelska, 2019-01-25
323
Bevaka
Spara som favorit
Tillfälligt slut – klicka "Bevaka" för att få ett mejl så fort boken går att köpa igen.
Finns även som
Visa alla 2 format & utgåvor
A radical reconsideration of how we develop the qualities that make us human, based on decades of cutting-edge experimental work by the former director of the Max Planck Institute for Evolutionary Anthropology. Virtually all theories of how humans have become such a distinctive species focus on evolution. Here, Michael Tomasello proposes a complementary theory of human uniqueness, focused on development. Building on the seminal ideas of Vygotsky, his data-driven model explains how those things that make us most human are constructed during the first years of a child's life. Tomasello assembles nearly three decades of experimental work with chimpanzees, bonobos, and human children to propose a new framework for psychological growth between birth and seven years of age. He identifies eight pathways that starkly differentiate humans from their closest primate relatives: social cognition, communication, cultural learning, cooperative thinking, collaboration, prosociality, social norms, and moral identity. In each of these, great apes possess rudimentary abilities. But then, Tomasello argues, the maturation of humans' evolved capacities for shared intentionality transform these abilities-through the new forms of sociocultural interaction they enable-into uniquely human cognition and sociality. The first step occurs around nine months, with the emergence of joint intentionality, exercised mostly with caregiving adults. The second step occurs around three years, with the emergence of collective intentionality involving both authoritative adults, who convey cultural knowledge, and coequal peers, who elicit collaboration and communication. Finally, by age six or seven, children become responsible for self-regulating their beliefs and actions so that they comport with cultural norms. Becoming Human places human sociocultural activity within the framework of modern evolutionary theory, and shows how biology creates the conditions under which culture does its work.
Visa hela texten

Magisterial-merging primatology, developmental psychology, cognitive psychology and evolution...Makes an impressive argument that most distinctly human traits are established early in childhood and that the general chronology in which these traits appear can at least-and at last-be identified. -- David P. Barash * Wall Street Journal * How does human psychological growth run in the first seven years, in particular how does it instill 'culture' in us? Tomasello addresses this question...by comparing us to chimpanzees and bonobos. Most of all, how does the capacity for shared intentionality and self-regulation evolve in people? This is a very thoughtful and also important book. -- Tyler Cowen * Marginal Revolution * An empirically rich view of human uniqueness that is not only informed by developmental psychology but also by cross-cultural and comparative research. Becoming Human is a theory of human origins, but it is first and foremost an attempt to understand the constant unfolding of our nature. -- Ivan Gonzalez-Cabrera * History and Philosophy of the Life Sciences * Theoretically daring, experimentally ingenious, and astonishingly generative, Becoming Human squarely tackles the abiding question of what makes us human. -- Susan Gelman, University of Michigan This grand synthesis of three decades of collaborative research at the Max Planck Institute in Leipzig is a landmark in our understanding of human development. -- Paul Harris, Harvard University Becoming Human is destined to become a classic. Anyone who is interested in cognitive science, child development, human evolution, or comparative psychology should read this book. It surely would have provoked a letter from Darwin-an intellectual ancestor, along with Vygotsky, of this scientific masterpiece. -- Andrew Meltzoff, University of Washington This is a must-read from a thinker who has had a major hand in our current understanding of the genealogy of human uniqueness and character. -- Henry Wellman, University of Michigan