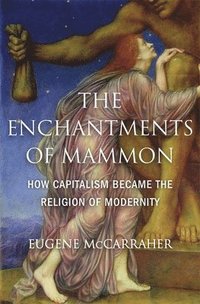 The Enchantments of Mammon

How Capitalism Became the Religion of Modernity

av Eugene McCarraher
Inbunden Engelska, 2019-11-29
369
Köp
Spara som favorit
Skickas inom 7-10 vardagar.
Gratis frakt inom Sverige över 159 kr för privatpersoner.
Far from displacing religions, as has been supposed, capitalism became one, with money as its deity. Eugene McCarraher reveals how mammon ensnared us and how we can find a more humane, sacramental way of being in the world. If socialists and Wall Street bankers can agree on anything, it is the extreme rationalism of capital. At least since Max Weber, capitalism has been understood as part of the "disenchantment" of the world, stripping material objects and social relations of their mystery and sacredness. Ignoring the motive force of the spirit, capitalism rejects the awe-inspiring divine for the economics of supply and demand. Eugene McCarraher challenges this conventional view. Capitalism, he argues, is full of sacrament, whether or not it is acknowledged. Capitalist enchantment first flowered in the fields and factories of England and was brought to America by Puritans and evangelicals whose doctrine made ample room for industry and profit. Later, the corporation was mystically animated with human personhood, to preside over the Fordist endeavor to build a heavenly city of mechanized production and communion. By the twenty-first century, capitalism has become thoroughly enchanted by the neoliberal deification of "the market." Informed by cultural history and theology as well as economics, management theory, and marketing, The Enchantments of Mammon looks not to Marx and progressivism but to nineteenth-century Romantics for salvation. The Romantic imagination favors craft, the commons, and sensitivity to natural wonder. It promotes labor that, for the sake of the person, combines reason, creativity, and mutual aid. In this impassioned challenge, McCarraher makes the case that capitalism has hijacked and redirected our intrinsic longing for divinity-and urges us to break its hold on our souls.
Visa hela texten

McCarraher's book is more brilliant, more capacious, and more entertaining, page by page, than his most ardent fans dared hope. The magnitude of his accomplishment-an account of American capitalism as a religion that begins in early modernity and extends to the present, an analysis that goes far beyond the loose versions of this argument we've seen before (Economists are like clergy! The Fed is like a church!) and rewrites American intellectual history as it does so-will stun even skeptical readers...It is a wonder, an enchantment on a world that has so forgotten itself as to think enchantments rare. -- Philip Christman * Christian Century * Extraordinary...Like MacIntyre, McCarraher both recognizes and detests capitalism's spoliations of creation and disintegration of communities, and casts a fond, forlorn eye toward the possibility of restoring a rationality of genuine human life...A majestic achievement. It will enjoy a long posterity...It is a work of great moral and spiritual intelligence, and one that invites contemplation about things we can't afford not to care about deeply. -- David Bentley Hart * Commonweal * [A] monumental labor of love...There have been marvelous studies of contemporary capitalism published in recent years...But this is an extraordinary work of intellectual history as well as a scholarly tour de force, a bracing polemic, and a work of Christian prophecy...It is beautifully written and a magnificent read...McCarraher challenges more than 200 years of post-Enlightenment assumptions about the way we live and work...This mammoth portrait of the religious longings at the heart of secular materialism carries a bleak message: 20th-century fantasies of the world as one global business have been realized...Refreshingly original and splendidly pulled off. * The Observer * One of the most impressive books I've ever read...The depth and range of McCarraher's scholarship are incredible...A must-read for anyone serious about the mesmerizing power of capitalism. -- Mark Dunbar * The Humanist * A vitally important book...It could have an impact similar to Alasdair MacIntyre's After Virtue...Certainly it is a book people concerned about the state of the world and moral theology should be aware of...McCarraher...explains how capitalism has become the religion of the modern world...This detailed account of the idolatries of our age deserves wide readership and detailed examination. -- Frank Litton * Irish Catholic * A genuine delight to read...[A] searing excoriation of economics as it is currently practiced...An extraordinary book...It is difficult to characterize this book as anything but a masterpiece for its synthesis of intellectual history, anticapitalist polemic, and Romantic imagination. There is a great deal to be gained from McCarraher's arguments. -- Daniel Walden * Current Affairs * A beguiling 800-page tour de force...[A] sweeping history...The author claims, with considerable evidence, that capitalism, too, is a form of worship, that it is a religion of modernity...Scintillating. -- Donald Sassoon * Church Times * A monumental, scholarly but also readable survey of how the champions of capitalism, their acolytes and foot soldiers-over and over, and with conspicuous success-reframed traditional religious longings and beloved communities as goals that could be achieved through the pursuit of profit...As enthralling a work of intellectual history as you could hope to read. -- Michael Duggan * Catholic Herald * The Enchantments of Mammon is a beautiful, stirring achievement. In a bold new synthesis ranging from early modern Europe to the contemporary United States, McCarraher challenges the received wisdom regarding the meanings of modernity and rationality, allowing us to look at familiar concepts in fresh and fruitful ways. This is truly a game-changer-the history of capitalism will never look the same again. -- Jackson Lears, author of <i>Rebirth of a Nation</i> With this book McCarraher aspi

Eugene McCarraher is Associate Professor of Humanities at Villanova University and the author of Christian Critics: Religion and the Impasse in Modern American Social Thought. He has written for Dissent and The Nation and contributes regularly to Commonweal, The Hedgehog Review, and Raritan. His work on The Enchantments of Mammon was supported by fellowships from the National Endowment for the Humanities and the American Council of Learned Societies.