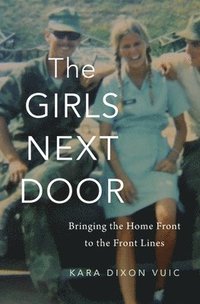 The Girls Next Door

Bringing the Home Front to the Front Lines

av Kara Dixon Vuic
Inbunden Engelska, 2019-02-22
289
Köp
Spara som favorit
Skickas inom 5-8 vardagar.
Fri frakt inom Sverige för privatpersoner.
Finns även som
Visa alla 1 format & utgåvor
The story of the intrepid young women who volunteered to help and entertain American servicemen fighting overseas, from World War I through the wars in Afghanistan and Iraq. The emotional toll of war can be as debilitating to soldiers as hunger, disease, and injury. Beginning in World War I, in an effort to boost soldiers' morale and remind them of the stakes of victory, the American military formalized a recreation program that sent respectable young women and famous entertainers overseas. Kara Dixon Vuic builds her narrative around the young women from across the United States, many of whom had never traveled far from home, who volunteered to serve in one of the nation's most brutal work environments. From the "Lassies" in France and mini-skirted coeds in Vietnam to Marlene Dietrich and Marilyn Monroe, Vuic provides a fascinating glimpse into wartime gender roles and the tensions that continue to complicate American women's involvement in the military arena. The recreation-program volunteers heightened the passions of troops but also domesticated everyday life on the bases. Their presence mobilized support for the war back home, while exporting American culture abroad. Carefully recruited and selected as symbols of conventional femininity, these adventurous young women saw in the theater of war a bridge between public service and private ambition. This story of the women who talked and listened, danced and sang, adds an intimate chapter to the history of war and its ties to life in peacetime.
Visa hela texten

[A] fascinating history.--Lawrence D. Freedman"Foreign Affairs" (03/01/2019) Besides illuminating women's significance in military life, [Vuic] chronicles changes in assumptions about gender, sexuality, and race in American culture for the last 100 years...A fresh contribution to women's history.--Kirkus Reviews (10/15/2018) This well-researched and well-written work delves into an aspect of women's service in wartime that is not often portrayed.--Library Journal (12/01/2018) An important and timely book by a first-rate historian who is also a superb storyteller. Vuic richly captures the often contradictory demands made on women who volunteered for overseas troop support programs: to embody home-front domesticity but provide sensual entertainment; to be attractive but not too beautiful; to be friendly but not too close. Yet her book also underscores the women's deep belief in the work as a genuine contribution to the war effort.--James Wright, President Emeritus, Dartmouth College, and author of Enduring Vietnam Women were recruited to entertain, distract, and support male soldiers overseas during America's twentieth-century wars, but their time in the spotlight was fleeting. Vuic returns them to center stage and reveals how utilizing feminine charms to advance military goals inadvertently gave these women opportunities to shape military culture and alter the trajectories of their own lives. A pleasure to read, bold and provocative, The Girls Next Door is a brilliant reinterpretation of the American experience of war.--Jennifer D. Keene, author of Doughboys, the Great War, and the Remaking of America The fascinating story of the women who, accompanying soldiers to war, volunteered for a different sort of service to the nation. YMCA Girls, Salvation Army Lassies, Red Cross Donut Dollies, and USO performers were meant to serve as symbols of home, entertaining 'our boys, ' boosting morale, and channeling men's sexuality. Vuic's insightful analysis of military entertainment is also a tale of the changing shape of the U.S. military over course of the twentieth century.--Beth Bailey, author of America's Army Filled with real people and real emotion, The Girls Next Door traces the provision of entertainment for American troops from WWI to the 1990s, showing that despite dramatic changes in context, a durable sexualization of women followed them into war zones across the twentieth century. The research, knowledge, and storytelling on display here are all outstanding. I wholeheartedly recommend this book.--Andrew Huebner, author of Love and Death in the Great War The Girls Next Door represents a major advancement in our understanding of gender and war. In fluid, vivid prose, Vuic shows the many complex ways in which home fronts and fighting fronts were interconnected through a complicated web of gendered interactions. A must read for anyone interested in war and society.--Michael Neiberg, author of The Path to War

Bloggat om The Girls Next Door

Kara Dixon Vuic is the inaugural LCpl. Benjamin W. Schmidt Professor of War, Conflict, and Society in Twentieth-Century America at Texas Christian University, an endowed position honoring a Texas Marine killed in Afghanistan. She is the author of Officer, Nurse, Woman: The Army Nurse Corps in the Vietnam War, which won the Lavinia L. Dock Book Award from the American Association for the History of Nursing and was Finalist for the Army Historical Foundation Distinguished Writing Award. She advised and appeared in the PBS documentary USO: For the Troops, and the TLC series Who Do You Think You Are? and created an oral history collection for the Vietnam Center & Archive at Texas Tech University.