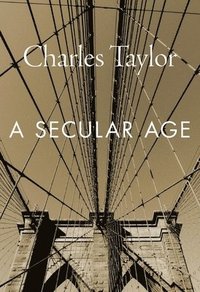 av Charles Taylor
Häftad Engelska, 2018-09-28
229
Köp
Spara som favorit
Finns även som
Visa alla 1 format & utgåvor
A New York Times Notable Book of the Year A Times Literary Supplement Book of the Year A Globe and Mail Best Book of the Year A Publishers Weekly Best Book of the Year A Tablet Best Book of the Year Winner of a Christianity Today Book Award "One finds big nuggets of insight, useful to almost anybody with an interest in the progress of human society." -The Economist "Taylor takes on the broad phenomenon of secularization in its full complexity...[A] voluminous, impressively researched and often fascinating social and intellectual history." -Jack Miles, Los Angeles Times "A Secular Age is a work of stupendous breadth and erudition." -John Patrick Diggins, New York Times Book Review "A culminating dispatch from the philosophical frontlines. It is at once encyclopedic and incisive, a sweeping overview that is no less analytically rigorous for its breadth." -Steven Hayward, Cleveland Plain Dealer "[A] thumping great volume." -Stuart Jeffries, The Guardian "Very occasionally there appears a book destined to endure. A Secular Age is such a book." -Edward Skidelsky, Daily Telegraph "It is refreshing to read an inquiry into the condition of religion that is exploratory in its approach." -John Gray, Harper's "A Secular Age represents a singular achievement." -Christopher J. Insole, Times Literary Supplement "A determinedly brilliant new book." -London Review of Books
Visa hela texten

Taylor's book is a major and highly original contribution to the debates on secularization that have been ongoing for the past century. There is no book remotely like it. -- Alasdair MacIntyre This is Charles Taylor's breakthrough book, a book of really major importance, because he succeeds in recasting the whole debate about secularism. This is one of the most important books written in my lifetime. I am tempted to say the most important book, but that may just express the spell the book has cast over me at the moment. -- Robert N. Bellah It is, simply, the most comprehensive account of the process and meaning of secularization... Taylor's depiction of the past two centuries is rich with insights and subtle analyses... Familiarity with Taylor's book is now the entry ticket for any serious discussion of secularization. -- Peter Steinfels * Commonweal * [A Secular Age] may become an enduring contribution to understanding religious belief, the evolution of the secular order, and the defining characteristics of modern secularism and contemporary spirituality. Like Charles Taylor's earlier books, it is a product of prodigious erudition. Its 874 dense pages brim with original observation, cogent argument constructed from sources in a wide array of disciplines, and generous ecumenical gestures, even towards humanists. His story is complex, somewhat repetitious and yet unflaggingly interesting: it is loaded with so much novel detail and insight that the reader will be grateful for each scrap of familiar ground. -- Tamas Pataki * Australian Review of Books * The focus here is neither on the role of religion in public institutions nor on the extent of religious beief, but rather on its conditions... It is the slow emergence of secularity in this sense that Taylor sets out to explain, at formidable length, and in remarkable historical and philosophical detail. Binding all that detail together is an argument that Taylor manages to sustain over nearly eight hundred pages. Simply put, A Secular Age is a magisterial refutation of what Taylor calls the 'subtraction story' of secularisation. -- Jonathan Derbyshire * Philosopher's Magazine * In a determinedly brilliant new book, Charles Taylor challenges the 'subtraction theory' of secularization which defines it as a process whereby religion simply falls away, to be replaced by science and rationality. Instead, he sees secularism as a development within Western Christianity, stemming from the increasingly anthropocentric versions of religion that arose from the Reformation. For Taylor, the modern age is not an age without religion; instead, secularization heralds 'a move from a society where belief in God is unchallenged and indeed, unproblematic, to one in which it is understood to be one option among others.' The result is a radical pluralism which, as well as offering unprecedented freedom, creates new challenges and instabilities. * London Review of Books * Charles Taylor's remarkable book A Secular Age achieves something quite different from what other writers on secularization have accomplished. Most have focused on decline as the essence of secularism-either the removal of religion from sphere after sphere of public life, or the decrease of religious belief and practice. But Taylor focuses on what kind of religion makes sense in a secular age... Taylor is asking not only how secularism became a significant option in a civilization that not so long ago was explicitly Christian, but what that change means for the spiritual quest, both of those who are still religious and those who consider themselves secular. I doubt many people have even perceived that aspect of secularism, and Taylor's book should be as much of a revelation to them as it was to me. -- Robert N. Bellah * Commonweal * Charles Taylor's A Secular Age offers a uniquely rich historical and philosophical overview of how we came to take a disenchanted world for granted-quietly inviting us to reflect that if disenchantment and

Charles Taylor is Professor Emeritus in the Department of Philosophy at McGill University and author of Sources of the Self, The Ethics of Authenticity, and A Secular Age. He has received many honors, including the Templeton Prize, the Berggruen Prize, and membership in the Order of Canada.