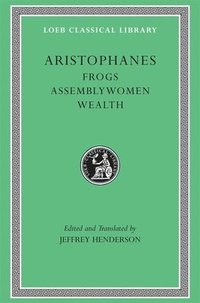 Frogs: WITH Assemblywoman AND Wealth

av Aristophanes
Inbunden Engelska, 2002-03-01
289
Köp
Spara som favorit
Skickas inom 7-10 vardagar.
Fri frakt inom Sverige för privatpersoner.
Aristophanes has long been admired for his brilliant satire of the social, intellectual, and political life of Athens at its height. The new Loeb Classical Library edition of his plays - with a suitably romping translation facing a freshly edited Greek text - is brought to completion with this fourth volume. "Frogs" was produced in 405 b.c., shortly after the deaths of Sophocles and Euripides. Dionysus, on a journey to the underworld to retrieve Euripides, is recruited to judge a contest between the traditional Aeschylus and the modern Euripides, a contest that yields both comedy and insight on ancient literary taste. In "Assemblywomen" Athenian women plot to save Athens from male misgovernance. They institute a new social order in which all inequalities based on wealth, age, and beauty are eliminated-with raucously comical results. The gentle humour and straightforward morality of "Wealth" made it the most popular of Aristophanes' plays from classical times to the Renaissance. Here the god Wealth, cured of his blindness, is able to distinguish good people from bad.
Visa hela texten

As with the three previous volumes, Henderson has edited the Greek text anew, and provided a useful and lively translation. Each play features a general introduction containing a plot summary and discussion of major themes, a note on the text, and a list of major annotated editions...In just over four years Henderson has edited and translated the four volumes of the new Loeb edition of Aristophanes. Every volume is well edited, succinctly annotated, and so translated as to engage the reader in the humor and seriousness of the comedies. It is likely there will be more readers studying Aristophanes rather than fewer ones with the publication of this final volume.-- (01/01/2003)