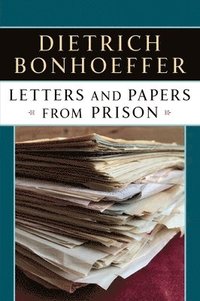 Letters and Papers from Prison

av Dietrich Bonhoeffer
Häftad Engelska, 1997-07-01
239
Köp
Spara som favorit
Finns även som
Visa alla 7 format & utgåvor
One of the great classics of prison literature, Letters and Papers from Prison effectively serves as the last will and testament of the Lutheran theologian Dietrich Bonhoeffer. Dietrich Bonhoeffer was a young German pastor who was executed by the Nazis in 1945 for his part in the "officers' plot" to assassinate Adolf Hitler. This expanded version of Letters and Papers from Prison shifts the emphasis of earlier editions of Bonhoeffer's theological reflections to the private sphere of his life. His letters appear in greater detail and show his daily concerns. Letters from Bonhoeffer's parents, siblings, and other relatives have also been added, in addition to previously inaccessible letters and legal papers referring to his trial. Acute and subtle, warm and perceptive, yet also profoundly moving, the documents collectively tell a very human story of loss, of courage, and of hope. Bonhoeffer's story seems as vitally relevant, as politically prophetic, and as theologically significant today, as it did yesterday.
Visa hela texten

Dietrich Bonhoeffer was born in Breslau in 1906. The son of a famous German psychiatrist, he studied in Berlin and New York City. He left the safety of America to return to Germany and continue his public repudiation of the Nazis, which led to his arrest in 1943. Linked to the group of conspirators whose attempted assassination of Hitler failed, he was hanged in April 1945.