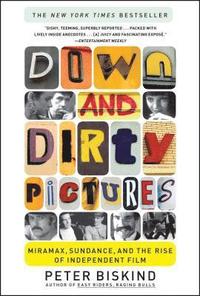 Down and Dirty Pictures

Miramax, Sundance, and the Rise of Independent Film

It wasn't so long ago that the Sundance Film Festival was an inconsequential event somewhere in Utah, and Miramax was a tiny distributor of music documentaries and soft-core trash. Today, of course, Sundance is the most important film festival this side of Cannes, and Miramax has become an industry giant, part of the huge Disney empire. Likewise, the directors who emerged from the independent movement, such as Quentin Tarantino, Steven Soderbergh, and David O. Russell -- who once had to max out their credit cards to realize their visions on the screen -- are now among the best-known directors in Hollywood. Not to mention the actors who emerged with them, like Matt Damon, Ben Affleck, Ethan Hawke, and Uma Thurman.

Down and Dirty Pictures chronicles the rise of independent filmmakers and of the twin engines -- Sundance and Miramax -- that have powered them. As he did in his acclaimed Easy Riders, Raging Bulls, Peter Biskind profiles the people who took the independent movement from obscurity to the Oscars, most notably Sundance founder Robert Redford and Harvey Weinstein, who with his brother, Bob, made Miramax an indie powerhouse. Biskind follows Sundance as it grew from a regional film festival to the premier showcase of independent film, succeeding almost despite the mercurial Redford, whose visionary plans were nearly thwarted by his own quixotic personality. He charts in fascinating detail the meteoric rise of the controversial Harvey Weinstein, often described as the last mogul, who created an Oscar factory that became the envy of the studios, while leaving a trail of carnage in his wake. As in Easy Riders, Biskind's incisive account is loaded with vibrant anecdotes and outrageous stories, all of it blended into a fast-moving narrative. Redford, the Weinsteins, and the directors, producers, and actors Biskind profiles are the people who reinvented Hollywood, making independent films mainstream. But success invariably means compromise, and it remains to be seen whether the indie spirit can survive its corporate embrace.

Candid, mesmerizing, and penetrating, Down and Dirty Pictures is a must-read for anyone interested in the film world and where it's headed.