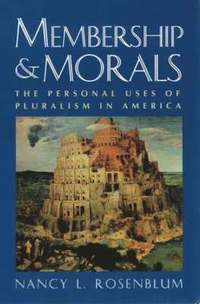 The Personal Uses of Pluralism in America

av Nancy L Rosenblum
Häftad Engelska, 2000-05-01
449
Köp
Spara som favorit
Skickas inom 7-10 vardagar.
Fri frakt inom Sverige för privatpersoner.
In recent years, membership has dropped in traditional voluntary associations such as Rotary Clubs, Jaycees, and bowling leagues. At the same time, concern is rising about the growth of paramilitary and hate groups. Scholars have warned that these trends are undermining civic society by creating a dangerous number of isolated, mistrustful individuals and organized, antisocial renegades. In this provocative book, however, Nancy Rosenblum takes a new, less narrowly political approach to the study of groups. And she reaches more optimistic conclusions about the state of civil society. Rosenblum argues that we should judge associations not only by what they do for civic virtue, but also by what they do for individual members. She shows that groups of all kinds--among them religious groups, corporations, homeowner associations, secret societies, racial and cultural identity groups, prayer groups, and even paramilitary groups--fill deep psychological and moral needs. And she contends that the failure to recognize this has contributed to an alarmist view of their social impact. For example, she argues that, although extremist groups have obvious antisocial aims, they constrain individuals who would be even more dangerous as maladjusted loners. And she examines the rapid growth of small "support groups"--which are usually dismissed as politically irrelevant--and shows that the moral support people find in such places as prayer groups and self-help groups helps to cultivate the social trust some scholars say is disappearing. Rosenblum concludes that, for practical and principled reasons, American democracy should permit expansive freedom of association, illustrating her case with discussion of specific cases in law. Rosenblum recognizes, however, that freedom has a price. She reminds us that some groups have oppressive and even criminal tendencies, and she explores what liberal democracy should do to ensure that individuals also have freedom within associations and freedom to exit. Throughout, Rosenblum writes eloquently and with a powerful moral voice, drawing on law, practical politics, and psychology to produce an original political theory of the moral uses of pluralism. The book adds remarkable depth and subtlety to one of the leading subjects in contemporary social and political debate.
Visa hela texten

Winner of the David Easton Prize "Nancy L. Rosenblum in Membership and Morals has produced a powerful argument that the worriers have got it wrong--or at least they have chosen the wrong things to worry about... Part of the attractiveness of her thesis is that it purports to cut across the usual lines of political battle... The bulk of her book is made up of an impressive survey of the hard cases of social affiliation ... and her defense in every case of the rights of people in a democratic society to associate with those of like mind and belief."--James Bowman, The Times Literary Supplement "Political theory, moral philosophy, and constitutional law desperately require a rigorous analysis of the role associations ought to play in sustaining good society. Such an analysis is precisely Nancy Rosenblum's great accomplishment."--Alan Wolfe, The New Republic "Membership and Morals is a thoughtful, challenging, and carefully nuanced book that should be read by all serious scholars of civil society."--Claire Morgan, The Annals of the American Academy of Political and Social Science

Nancy L. Rosenblum is Henry Merritt Wriston Professor and Professor of Political Science at Brown University. She is the author of Another Liberalism: Romanticism and the Reconstruction of Liberal Thought and Bentham's Theory of the Modern State. She is the editor of Liberalism and the Moral Life; Thoreau's Political Writings; and Obligations of Citizenship and Demands of Faith.

AcknowledgmentsIntroduction: Associations and the Moral Anxieties of Liberalism3Pt. 1Pluralism and Liberal Expectancy231Civil Society: Getting the Dangers Right252The Morality of Association47Pt. 2Voluntary Associations713Religious Associations: Constitutional Incongruence734Corporate Culture and Community at Home1125Compelled Association: Democratic Equality and Self-Respect1586Membership and Voice1917Secret Societies and Private Armies: Conspiracism and Clear and Present Danger2398"Fusion Republicanism" and Paramilitary Paul Reveres2859Identity Groups and Voluntary Association: Filling in the Empty Politics of Recognition319Conclusion: Navigating Pluralism: The Democracy of Everyday Life349Notes365Index417