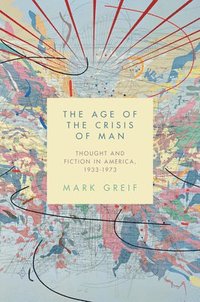 The Age of the Crisis of Man

av Mark Greif
Inbunden Engelska, 2014-12-16
299
Köp
Spara som favorit
Skickas inom 7-10 vardagar.
Fri frakt inom Sverige för privatpersoner.
Finns även som
Visa alla 2 format & utgåvor
In a midcentury American cultural episode forgotten today, intellectuals of all schools shared a belief that human nature was under threat. The immediate result was a glut of dense, abstract books on the "nature of man." But the dawning "age of the crisis of man," as Mark Greif calls it, was far more than a historical curiosity. In this ambitious intellectual and literary history, Greif recovers this lost line of thought to show how it influenced society, politics, and culture before, during, and long after World War II. During the 1930s and 1940s, fears of the barbarization of humanity energized New York intellectuals, Chicago protoconservatives, European Jewish emigres, and native-born bohemians to seek "re-enlightenment," a new philosophical account of human nature and history. After the war this effort diffused, leading to a rebirth of modern human rights and a new power for the literary arts. Critics' predictions of a "death of the novel" challenged writers to invest bloodless questions of human nature with flesh and detail. Hemingway, Faulkner, and Richard Wright wrote flawed novels of abstract man. Succeeding them, Ralph Ellison, Saul Bellow, Flannery O'Connor, and Thomas Pynchon constituted a new guard who tested philosophical questions against social realities--race, religious faith, and the rise of technology--that kept difference and diversity alive. By the 1960s, the idea of "universal man" gave way to moral antihumanism, as new sensibilities and social movements transformed what had come before. Greif's reframing of a foundational debate takes us beyond old antagonisms into a new future, and gives a prehistory to the fractures of our own era.
Visa hela texten

A Wall Street Journal Book of the Year for 2015 (selected by Adam Thirlwell) Winner of the 2015 Morris D. Forkosch Book Prize, Journal of the History of Ideas Winner of the 18th Annual (2016) Susanne M. Glasscock Humanities Book Prize for Interdisciplinary Scholarship, Melbern G. Glasscock Center for Humanities Research at Texas A&M University A New Statesman Book of the Year for 2015 (selected by Robert Macfarlane) One of Flavorwire's 10 Must-Read Academic Books for 2015 One of the Slate Book Review's Overlooked Books of 2015 One of The Paris Review's Staff Picks for 2015 (selected by Lorin Stein) "An important book, a brilliant book, an exasperating book... In The Age of the Crisis of Man: Thought and Fiction in America, 1933-1973, the gifted essayist Mark Greif, who reveals himself to be also a skillful historian of ideas, charts the history of the 20th-century reckonings with the definition of 'man.'"--Leon Wieseltier, New York Times Book Review "In careful, thoughtful, and elegant prose reminiscent of Lionel Trilling and Edmund Wilson, Greif gives a brilliant exploration of the philosophical field that developed in the middle decades of the 20th century and echoes even up to our own time... Greif's dazzling, must read analysis offers luminous insights into midcentury American understandings of humanity and its relevance to the present."--Publishers Weekly, starred review "[A]n important new study of mid-century intellectual life."--Louis Menand, New Yorker "Bracingly ambitious... [He is] a stimulating literary critic."--Pankaj Mishra, London Review of Books "I will not insult [Mark] Greif by calling him a public intellectual. He is an intellectual, full-stop... An intellectual is not an academic who can write plain or a journalist who can write smart, but something else altogether... Greif's history turns out to be a prehistory--our prehistory."--William Deresiewicz, Harper's "[The Age of the Crisis of Man is] a brilliant contribution to the history of ideas, one of the rare books that reshapes the present by reinterpreting the past."--Adam Kirsch, Tablet "[E]xhilarating...By 'the discourse of man' Greif means the vast midcentury literature on human dignity, from Being and Nothingness, to the 'Family of Man' photo exhibition, to the Universal Declaration of Human Rights--a discourse that Greif interrogates with verve, erudition, sympathy, and suspicion, and that he follows into the fiction of our time."--Lorin Stein, Paris Review "It is encouraging to come across the work of a young scholar that offers clear-eyed insight into the origins of the current malaise, while also exemplifying what a fresh contribution to humanistic study might look like today... [A]mbitious and deeply researched."--Christopher Benfey, New York Review of Books "[W]ith this brilliant book Greif is restarting the project of 're-enlightenment,' pointing us toward ... the spiritual daylight of the present--where literary purposes and political agendas are moments on an intellectual continuum, not the terms of an either/or choice."--James Livingston, Bookforum "A striking construction, bringing together an array of thinkers and intellectual traditions whose synchronicity has gone largely unremarked."--David Simspon, New Left Review "Sometimes a work of cultural history surprises and enlightens simply by naming what we had not thought required a name. [Such is] Mark Greif's revelatory study of mid-20th -century humanism."--Brian Dillon, Guardian (UK) "A stunning intellectual history of the 20th century... [W]hat this book really offers is a new way of thinking about thinking, and the particular thinking that fiction can do."--Adam Thirlwell, Wall Street Journal "[O]ne of the most accessibly intelligent and provocative looks at a fascinating period in American intellectual life. Read it, if only for Greif's exploration of white

Bloggat om The Age of the Crisis of Man

Mark Greif is associate professor of literary studies at the New School. He is a founder and editor of the journal n+1.