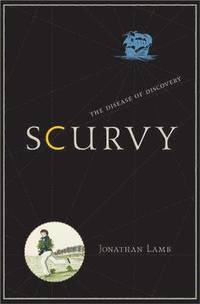 The Disease of Discovery

av Jonathan Lamb
(1 röst)
Inbunden Engelska, 2016-12-06
319
Köp
Spara som favorit
Skickas inom 5-8 vardagar.
Fri frakt inom Sverige för privatpersoner.
Finns även som
Visa alla 2 format & utgåvor
Scurvy, a disease often associated with long stretches of maritime travel, generated sensations exceeding the standard of what was normal. Eyes dazzled, skin was morbidly sensitive, emotions veered between disgust and delight. In this book, Jonathan Lamb presents an intellectual history of scurvy unlike any other, probing the speechless encounter with powerful sensations to tell the story of the disease that its victims couldn't because they found their illness too terrible and, in some cases, too exciting. Drawing on historical accounts from scientists and voyagers as well as major literary works, Lamb traces the cultural impact of scurvy during the eighteenth-century age of geographical and scientific discovery. He explains the medical knowledge surrounding scurvy and the debates about its cause, prevention, and attempted cures. He vividly describes the phenomenon and experience of "scorbutic nostalgia," in which victims imagined mirages of food, water, or home, and then wept when such pleasures proved impossible to consume or reach. Lamb argues that a culture of scurvy arose in the colony of Australia, which was prey to the disease in its early years, and identifies a literature of scurvy in the works of such figures as Herman Melville, Samuel Taylor Coleridge, Francis Bacon, and Jonathan Swift. Masterful and illuminating, Scurvy shows how the journeys of discovery in the eighteenth century not only ventured outward to the ends of the earth, but were also an inward voyage into the realms of sensation and passion.
Visa hela texten

"Lamb's work is a virtuoso set of variations around his theme... If readers take Lamb on his own terms, and appreciate his wide-ranging approach, they will find much of interest."--Anne Crowther, Times Literary Supplement "In Scurvy: The Disease of Discovery, Jonathan Lamb, a professor at Vanderbilt University, shows ... that scurvy was a much stranger condition than we imagine, with effects on the mind that neuroscience is only now beginning to elucidate. The result is a book that renders a familiar subject as exotic and uncanny as the tropical shores that confronted sailors in the grip of scurvy's delirium."--Mike Jay, Wall Street Journal "Expertly researched and richly written, Lamb's study tracks the links in [scurvy] sufferers' unusual symptoms--heightened senses, cravings, and emotions that became known as 'scorbutic nostalgia,' as well as a ghastly physical breakdown--through naval logs, physicians' journals, and literature... Lamb's rigorously scholastic and elegantly lyrical account should intrigue both historians and literary critics."--Publishers Weekly, starred review "Deeply informed by the history and literature of seafaring, Lamb's book provides valuable insights into the workings of science that can even guide our expectations about research today."--Jonathon Keats, New Scientist "A sweeping and often surprising academic survey that roams through the art, philosophy and literature of the Age of Exploration."--Peter Moore, Literary Review "The chapter that's situated in Australia brings all of [the book's] ideas together in most satisfying fashion. Down Under, the land offered little in the way of natural anti-scorbutics, and convicts and colonists suffered greatly from the disease. Its effects, as Lamb neatly shows, exacerbated the sufferings of the convicts, who were provided very little in the way of fresh food; as in his passages about scurvy on board slave ships, I was struck by the realization that scurvy was often one more weapon in the arsenal of the oppressor during an age of colonization... Two-hundred years ago, Australia's penal regime caused scurvy in its prisoners, through poor diet, and then condemned them for stealing greens from the colony's nascent gardens to feed their bodies. In the United States, in 2016, Michigan has still not restored clean water to Flint, after two years; the lead poisoning there may cause all kinds of physical and mental complications for residents. Lamb's book shows just how hard it can be for humans to fix an endemic problem when pride and prejudice get in the way."--Rebecca Onion, Slate "To the extent that most people are familiar with scurvy today, it's as a condition that, like bubonic plague, seems to belong to the past, or as a mock-serious admonishment to children reluctant to eat their greens. Students of history know it primarily as an ailment associated with the Age of Discovery, during which large numbers of mariners had to endure months away from land for the first time in history. Successive generations of writers perceived the link between lengthy sojourns at sea and increased incidents of scurvy among ships' crews, and tried to make sense of it. As Jonathan Lamb stresses in this thought-provoking study, the irony of the history of scurvy is how often people hit upon the correct remedy--and how often society at large failed to recognize it as such... Lamb's writing style is elegant... The enthusiasm for the subject is infectious (no pun intended)."--Craig Owen Jones, PopMatters "In Scurvy, Jonathan Lamb ... draws on descriptions of the disease by voyagers, diagnoses by scientists, and a wide array of fictional accounts (ranging from Jonathan Swift's Gulliver's Travels to George Orwell's Nineteen Eighty-Four to Peter Carey's Jack Maggs and The True History of the Kelly), to identify a 'scorbutic' sensibility. Sweeping, sophisticated, and speculative, Scurvy is a tour de force meditat

Jonathan Lamb is the Andrew W. Mellon Professor of the Humanities at Vanderbilt University. His many books include The Things Things Say (Princeton) and The Evolution of Sympathy in the Long Eighteenth Century.