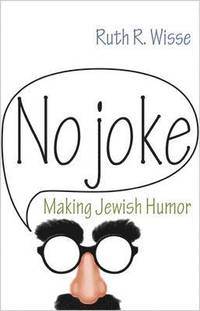 av Ruth R Wisse
Inbunden Engelska, 2013-06-02
189
Köp
Spara som favorit
Finns även som
Visa alla 2 format & utgåvor
Humor is the most celebrated of all Jewish responses to modernity. In this book, Ruth Wisse evokes and applauds the genius of spontaneous Jewish joking--as well as the brilliance of comic masterworks by writers like Heinrich Heine, Sholem Aleichem, Isaac Babel, S. Y. Agnon, Isaac Bashevis Singer, and Philip Roth. At the same time, Wisse draws attention to the precarious conditions that call Jewish humor into being--and the price it may exact from its practitioners and audience. Wisse broadly traces modern Jewish humor around the world, teasing out its implications as she explores memorable and telling examples from German, Yiddish, English, Russian, and Hebrew. Among other topics, the book looks at how Jewish humor channeled Jewish learning and wordsmanship into new avenues of creativity, brought relief to liberal non-Jews in repressive societies, and enriched popular culture in the United States. Even as it invites readers to consider the pleasures and profits of Jewish humor, the book asks difficult but fascinating questions: Can the excess and extreme self-ridicule of Jewish humor go too far and backfire in the process? And is "leave 'em laughing" the wisest motto for a people that others have intended to sweep off the stage of history?
Visa hela texten

Honorable Mention for the 2013 PROSE Award in Language & Linguistics, Association of American Publishers Shortlisted for the 2014 Sophie Brody Medal, Reference and User Services Association (RUSA) of the American Library Association "[S]ubtle and provocative."--Anthony Gottlieb, New York Times Book Review "Ms. Wisse provides a rich assortment of mordant wit at the threshold of extinction."--Edward Kosner, Wall Street Journal "Accessible to nonacademic audiences as well as scholars, this cultural history is a welcome addition to the study of humor in a sociopolitical context."--Publishers Weekly "[E]xcellent... I applaud the intellectual courage of this book, the breadth of Wisse's learning, the comprehensiveness of her ambitions, her unembarrassed declarations of pleasure in what she finds funny (and if we don't, that's tough on us), her unapologetic references to such serious students of comedy as Freud, whose writing on jokes it is easy to deride, and the confidence with which she moves from rabbis to writers to jesters, from literature to music hall and back. Comedy is comedy is comedy."--Howard Jacobson, Standpoint "In the delightful book No Joke: Making Jewish Humor (Princeton University Press) Harvard professor Ruth Wisse evokes and applauds the genius of Jewish joking--as well as the brilliance of comic masterworks by writers like Heinrich Heine, Sholem Aleichem, Isaac Babel, S.Y. Agnon, Isaac Bashevis Singer, and Philip Roth. Wisse broadly traces modern Jewish humour around the world, teasing out its implications as she explores memorable and telling examples from German, Yiddish, English, Russian and Hebrew."--Canadian Jewish News "[A] rare work of cultural scholarship that is also laugh-out-loud-funny."--Jonathan Kirsch, Jewish Journal of Greater Los Angeles "Wisse, Martin Peretz Professor of Yiddish Literature and professor of comparative literature at Harvard, surveys Jewish humor from Heinrich Heine and Franz Kafka to Larry David and Howard Jacobson, displaying its wit and comic genius at the same time that she looks behind its surface at the often painful and dangerous experiences it reflects."--Maron L. Waxman, Jewish Book Council "Seriously funny, humorously serious, scholarly, witty and wise."--Kirkus Reviews "[S]harp and thoughtful... To her credit, Ms. Wisse offers no general theory of Jewish humour in her book, preferring description and textual analysis, at which she excels, to psycho-historical puffery."--Economist "[Ruth Wisse] has produced an excellent treatise about Jewish comedy in all of its forms, focusing her gaze on how it has changed and responded to the shifting landscape of Jewish powerlessness."--Elaine Margolin, Jerusalem Post "[R]ichly absorbing."--Robert Fulford, National Post "No Joke is a remarkable combination of scholarship and current concerns, written in elegant prose, which can be enjoyed three times: first, for the humor; second, for the erudition; and finally and most important, for its moral vision."--Rick Richman, Commentary "Because Jewish humor arose in response to specific conditions of living, Wisse organizes chapters around locales and times: Germany, the Anglosphere, fascism (Hitler and Stalin) and modern Israel. Wisse calls humor the only folk art that isn't copyrighted."--Christian Century "No Joke is a thought-provoking compilation of humorous stories woven almost seamlessly with history, and interpretive analysis. The author keeps it personal--sometimes moving comfortably into a relaxed and chatty tone--and she keeps it real."--Martin A. David, New York Journal of Books "[No Joke] offer[s] a far-reaching discussion of the essential role humor plays in an ethnic group that historically has dwelt in the margins of the nations and cultures of others... [N]o Joke is a comprehensive and insightful historical survey of Jewish hum

Ruth R. Wisse is the Martin Peretz Professor of Yiddish Literature and professor of comparative literature at Harvard University. She is the author of The Modern Jewish Canon: A Journey through Language and Culture, which won a National Jewish Book Award. Her other books include Jews and Power (Schocken) and The Schlemiel as Modern Hero.