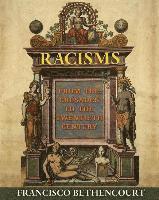 From the Crusades to the Twentieth Century

av Francisco Bethencourt
Inbunden Engelska, 2014-01-19
359
Köp
Spara som favorit
Skickas inom 7-10 vardagar.
Gratis frakt inom Sverige över 159 kr för privatpersoner.
Finns även som
Visa alla 2 format & utgåvor
Racisms is the first comprehensive history of racism, from the Crusades to the twentieth century. Demonstrating that there is not one continuous tradition of racism, Francisco Bethencourt shows that racism preceded any theories of race and must be viewed within the prism and context of social hierarchies and local conditions. In this richly illustrated book, Bethencourt argues that in its various aspects, all racism has been triggered by political projects monopolizing specific economic and social resources. Racisms focuses on the Western world, but opens comparative views on ethnic discrimination and segregation in Asia and Africa. Bethencourt looks at different forms of racism, and explores instances of enslavement, forced migration, and ethnic cleansing, while analyzing how practices of discrimination and segregation were defended. This is a major interdisciplinary work that moves away from ideas of linear or innate racism and recasts our understanding of interethnic relations.
Visa hela texten

"[A]nalytically sophisticated... Bethencourt tacks deftly between cultural and social history. His binocular vision marks Racisms out from most previous studies."--David Armitage, Times Literary Supplement "Bethencourt, professor of history at King's College London, examines how expansion abroad shaped European systems of ethnic prejudice in a tour de force spanning the Americas, West Africa, India, and other colonial environs."--Publishers Weekly "[W]ell worth reading."--Christie Davies, Standpoint "Francisco Bethencourt's Racisms could not be more timely ... Bethencourt's incisive analysis ought to be compulsory reading in the think tanks, chanceries and ministries of the developed world."--Maria Misra, Prospect "To understand what fuelled such racist ideologies and practices, I can think of no better book than Francisco Bethencourt's Racisms. It is an ambitious, bold project... Bethencourt addresses the 'scientific' turn in racial classification systems. There is a vast literature on the ideas of influential men such as ... Charles Darwin and many others. However, Bethencourt's summary is the clearest and most sophisticated to date... [An] impressive book."--Joanna Bourke, New Statesman "[A]mbitious and wide-ranging... Racisms['s] cataloguing of successive centuries of poisonous bigotry, of tangled, self-serving myth and murderous victimisation, creates a powerful cumulative effect. To chart some of my own emotions while reading it: anger; pain, disgust and sorrow. This is an unlovely history. But a necessary one that appears, sadly for the wrong reasons, at the right time."--Ekow Eshun, Independent "As a comparative study of colonial behaviour Racisms is astonishing... Readers of Racisms will learn a great deal about the colonial encounters that brought people of different regions, religions, 'skin colors,' and 'ethnicities' into contact with each other during the long centuries of European expansion."--David Nirenberg, Literary Review "Epic in scale and ringing with authority."--Steven Carroll, Age "Although Bethencourt's writings are grounded in academia, Racisms is a highly accessible and lively account that should appeal to a wide audience--a work that, while not being too sophisticated for the average person to read and appreciate for the multiple insights that it provides, makes for just as worthy an undergraduate text."--Lois Henderson, BookPleasures.com "For those who are already working on racism, or who are at the very least acquainted with it, the book should prove a very useful tool in locating specific work within a larger historical landscape. It serves as a very strong call to open one's historical horizons, both temporally and geographically, which can only improve one's work. In this sense, Racisms is well worth reading. It represents a welcome contribution to the growing body of work on the topic by debunking some very persistent myths about it."--Philippe-Andre Rodriguez, Oxonian Review "In this richly illustrated study, Bethencourt defines racism as prejudice based on ethnic descent that is supported by discriminatory measures driven by political motivations... Although Europe constitutes Bethencourt's focal point, he draws on examples of racism from Africa, Asia, and the Americas as points of comparison and context."--Choice "Bethencourt has done an admirable job sifting through history to produce this broad survey of the evolution of racial thought, always tying each development back to the political projects it was meant to facilitate and thereby illustrating the emptiness of race as an ontological category. Racisms not only pulls regularly from primary sources, such as travel narratives or scientific reports, but it is also richly peppered with images that bring to life the shifting perception of race through the centuries."--Guy Lancaster, Journal of History and Cultures "Rac

Francisco Bethencourt is the Charles Boxer Professor of History at King's College London, and the author of The Inquisition: A Global History, 1478-1834.