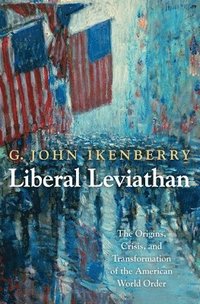 The Origins, Crisis, and Transformation of the American World Order

av G John Ikenberry
Häftad Engelska, 2012-08-26
269
Köp
Spara som favorit
Skickas inom 7-10 vardagar.
Fri frakt inom Sverige för privatpersoner.
Beställ boken senast måndag 7 december för leverans innan julafton
Finns även som
Visa alla 1 format & utgåvor
In the second half of the twentieth century, the United States engaged in the most ambitious and far-reaching liberal order building the world had yet seen. This liberal international order has been one of the most successful in history in providing security and prosperity to more people. But in the last decade, the American-led order has been troubled. Some argue that the Bush administration, with its war on terror, invasion of Iraq, and unilateral orientation, undermined this liberal order. Others argue that we are witnessing the end of the American era. Liberal Leviathan engages these debates. G. John Ikenberry argues that the crisis that besets the American-led order is a crisis of authority. A political struggle has been ignited over the distribution of roles, rights, and authority within the liberal international order. But the deeper logic of liberal order remains alive and well. The forces that have triggered this crisis--the rise of non-Western states such as China, contested norms of sovereignty, and the deepening of economic and security interdependence--have resulted from the successful functioning and expansion of the postwar liberal order, not its breakdown. The liberal international order has encountered crises in the past and evolved as a result. It will do so again. Ikenberry provides the most systematic statement yet about the theory and practice of the liberal international order, and a forceful message for policymakers, scholars, and general readers about why America must renegotiate its relationship with the rest of the world and pursue a more enlightened strategy--that of the liberal leviathan.
Visa hela texten

One of Choice's Outstanding Academic Titles for 2011: Top 25 Books "[A]mbitious and thought-provoking."--Gideon Rachman, Financial Times "International orders guide how major powers interact with one another and with less powerful states: how they cooperate and compete in trade and security and when and why they respect one another's sovereignty. Ikenberry's important book tackles this complex subject, giving readers a deep understanding of the factors that determine the type of international order... Liberal Leviathan is a valuable guide to understanding the factors that will determine its eventual shape."--Foreign Affairs "Liberal Leviathan is a brilliant inquisition into the nature of international order, politics of unipolarity, and substance of United States foreign policy... Drawing equally on international relations theory, history, and political theory, Liberal Leviathan offers a probing analysis into the challenges to the current U.S.-led international order and its likely future."--David A. Lake, Global Governance "This is a valuable work of international relations theory."--Choice "Liberal Leviathan is a great review of the state of the art of broad and narrow Realist and liberal theories being discussed in American academia."--Cesar de Prado, International Affairs "His book lucidly explains how the end of the Cold War allowed the U.S.-dominated Western system to expand to the rest of the world. Ikenberry's account has an intuitive appeal. There's always more than enough chaos to argue that the world is in crisis ... he writes thoughtfully about the challenge of integrating rising powers into global governance... As a clear and informed synthesis of the existing scholarship on global governance, this book is a success."--David Bosco, American Prospect "Ikenberry's book is a cogently developed argument that builds upon his previous writings and will be a point of reference for the 'international liberal' literature."--Jakub J. Grygiel, Claremont Review of Books "[T]he sheer breadth of the work, the clarity of the presentation ... and the synthesis of an extraordinary amount of theoretical and historical literature will make the volume an important resource for students and scholars for a very long time."--James M. McCormick, Perspectives on Politics "Ikenberry impresses with his range of concerns, by his drive to formulate clear and parsimonious propositions about interstate relations, and by the pains he takes to express himself with clarity and precision. He announces his lines of argument, develops them, repeats them, and for good measure cross references them."--Michael H. Hunt, Political Science Quarterly "The book elaborates on how America crafted and created 'cooperative security'--arguably the most important innovation in national security in the 20th century."--Wang Yong, Shanghai Daily

G. John Ikenberry is the Albert G. Milbank Professor of Politics and International Affairs at Princeton University. His books include After Victory: Institutions, Strategic Restraint, and the Rebuilding of Order after Major Wars (Princeton).