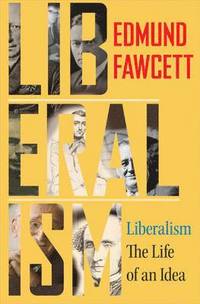 The Life of an Idea

av Edmund Fawcett
Inbunden Engelska, 2014-05-04
348
Bevaka
Spara som favorit
Tillfälligt slut – klicka "Bevaka" för att få ett mejl så fort boken går att köpa igen.
Finns även som
Visa alla 3 format & utgåvor
Liberalism dominates today's politics just as it decisively shaped the past two hundred years of American and European history. Yet there is striking disagreement about what liberalism really means and how it arose. In this engrossing history of liberalism--the first in English for many decades--veteran political observer Edmund Fawcett traces the ideals, successes, and failures of this central political tradition through the lives and ideas of a rich cast of European and American thinkers and politicians, from the early nineteenth century to today. Using a broad idea of liberalism, the book discusses celebrated thinkers from Constant and Mill to Berlin, Hayek, and Rawls, as well as more neglected figures. Its twentieth-century politicians include Franklin D. Roosevelt, Lyndon Johnson, and Willy Brandt, but also Hoover, Reagan, and Kohl. The story tracks political liberalism from its beginnings in the 1830s to its long, grudging compromise with democracy, through a golden age after 1945 to the present mood of challenge and doubt. Focusing on the United States, Britain, France, and Germany, the book traces how the distinct traditions of these countries converged on the practice of liberal democracy. Although liberalism has many currents, Fawcett suggests that they are held together by shared commitments: resistance to power, faith in social progress, respect for people's chosen enterprises and beliefs, and acceptance that interests and faiths will always conflict. An enlightening account of a vulnerable but critically important political creed, Liberalism will be a revelation for readers who think they already know--for good or ill--what liberalism is.
Visa hela texten

Honorable Mention for the 2015 PROSE Award in Government & Politics, Association of American Publishers "[A] richly informative historical tour of liberal leaders and concepts... [Fawcett] takes a commendably liberal approach."--Alan Wolfe, New York Times Book Review "[E]xcellent... What Fawcett clearly and compellingly shows is that the relationship of capitalism to the state, of economics to politics, should be at the heart of any history of liberal ideas. Whether you take his version as a story about liberalism's realist adaptability or its counterrevolutionary intent, it's a fitting one for a moment in which capitalism and political economy are back on the agenda."--Katrina Forrester, The Nation "Fawcett's workmanlike history of the bundle of ideas and practices that liberals have espoused since the Spanish liberales coined the term after the Napoleonic wars is an excellent guide to liberalism's rise and fall."--David Marquand, New Republic "[A] comprehensive, quirky, scholarly and personal exploration of one of the dominant ideas in political discourse... [T]his is a phenomenal work of research and synthesis... A pool of profound, rigorous research and thought that has no shallow end."--Kirkus Reviews "[Liberalism: The Life of an Idea] confirms the virtues of the disciplined generalist's approach to the exploration of politics. Deftly combining history, economic thought, and political theory, Fawcett has produced the sort of synoptic work that in our era is increasingly unlikely to come from universities... [It] not only draws on the practicing journalist's close observation of political affairs but also the educated person of letters' facility across many disciplines. The result is an engrossing narrative of liberalism's dramatic career--often lustrous but also marked by its share of delusion, hypocrisy, hubris, and tragedy."--Peter Berkowitz, Real Clear Politics "Liberalism by Edmund Fawcett is not only a gripping piece of intellectual history, it also equips the reader to understand today's threats--and how they might be withstood... Liberalism is indeed under siege. Those who would fortify the walls would do well to study the foundations. Mr Fawcett's book offers an admirable archaeology."--Economist "A book so good I want to read it again... [A]n intellectual page-turner made even more readable by its personal, sometimes quirky, style and its seamless mix of philosophy, history, biography and history of ideas."--David Goodhart, Standpoint "In Liberalism: The Life of an Idea, Fawcett draws on the experiences and ideas of dozen of thinkers and politicians in an informative, lively, and provocative history of a political tradition he deems 'worth standing up for.'... Fawcett's book is an immensely interesting, informative, and important assessment of liberalism... Liberalism is as relevant as ever, Fawcett concludes, passionately and persuasively."--Glenn C. Altschuler, Huffington Post "[An] impressive account of the 'life of an idea.'... [O]ne of the many virtues of Fawcett's unfailingly stimulating book is that he makes you look past the misleading labels with which we characterise political argument. For anyone interested in the history of the ideas that have shaped our society, his book is essential reading."--Simon Shaw, Mail on Sunday "[A] fine work of intellectual history that shows, among much else, that experience can shape ideas, too."--William Anthony Hay "[M]agnificent."--Bruce Edward Walker, Morning Sun "Fawcett has written a marvelous book... [H]is erudition would be daunting if he didn't write with such verve... [I]t's a pleasure."--Clive Crook, Bloomberg View "As Fawcett's compelling history reveals, the twentieth century turned out to be much more unstable and dangerous than the early liberals anticipated and has forced liberals ever since to temper their expectations for huma

Edmund Fawcett worked at The Economist for more than three decades, serving as chief correspondent in Washington, Paris, and Berlin, as well as European and literary editor. His writing has also appeared in the New York Times, the Los Angeles Times, the Guardian, and the Times Literary Supplement, among other publications.

Preface xi Acknowledgments xvii Introduction It's About More Than Liberty 1 PART ONE The Confidence of Youth (1830-1880) 27 1 Historical Setting in the 1830s: Thrown into a World of Ceaseless Change 28 2 Guiding Thoughts from Founding Thinkers: Conflict, Resistance, Progress, and Respect 34 i. Humboldt and Constant: Releasing People's Capacities and Respecting Their Privacy 34 ii. Guizot: Taming Conflict without Arbitrary Power 44 iii. Tocqueville and Schulze-Delitzsch: The Modern Powers of Mass Democracy and Mass Markets 57 iv. Chadwick and Cobden: Governments and Markets as Engines of Social Progress 65 v. Smiles and Channing: Personal Progress as Self-Reliance or Moral Uplift 74 vi. Spencer: Liberalism Mistaken for Biology 79 vii. J. S. Mill: Holding Liberalism's Ideas Together 85 3 Liberalism in Practice: Four Exemplary Politicians 98 i. Lincoln: The Many Uses of "Liberty" in the Land of Liberty 98 ii. Laboulaye and Richter: Tests for Liberals in Semiliberal Regimes 106 iii. Gladstone: Liberalism's Capaciousness and the Politicsof Balance 112 4 The Nineteenth-Century Legacy: Liberalism without Caricature 117 i. Respect, "the Individual," and the Lessons of Toleration 117 ii. The Achievements That Gave Liberals Confidence 133 PART TWO Liberalism in Maturity and the Struggle with Democracy (1880-1945) 137 5 Historical Setting in the 1880s: The World Liberals Were Making 138 6 The Compromises That Gave Us Liberal Democracy 146 i. Political Democracy: Liberal Resistance to Suffrage Extension 146 ii. Economic Democracy: The "New Liberalism" and Novel Tasks for the State 159 iii. Ethical Democracy: Letting Go Ethically and the Persistence of Intolerance 167 7 The Economic Powers of the Modern State and Modern Market 173 i. Walras, Marshall, and the Business Press: Resisting the State on Behalf of Markets 173 ii. Hobhouse, Naumann, Croly, and Bourgeois: Resisting Markets on Behalf of Society 186 8 Damaged Ideals and Broken Dreams 198 i. Chamberlain and Bassermann: Liberal Imperialism 198 ii. Lloyd George, Clemenceau, and Wilson: Liberal Hawks of 1914-1918 214 iii. Alain, Baldwin, and Brandeis: Liberal Dissent and the Warfare State 227 iv. Stresemann: Liberal Democracy in Peril 237 v. Keynes, Fisher, and Hayek (i): Liberal Economists in the Slump 245 vi. Hoover and Roosevelt: Forgotten Liberal and Foremost Liberal 267 9 Thinking about Liberalism in the 1930s-1940s 275 i. Lippmann and Hayek (ii): Liberals as Antitotalitarians 275 ii. Popper: Liberalism as Openness and Experiment 279 PART THREE Second Chance and Success (1945-1989) 285 10 Historical Setting after 1945: Liberal Democracy's New Start 286 11 New Foundations: Rights, a Democratic Rule of Law, and Welfare 290 i. Drafters of the 1948 Declaration of Human Rights: Liberal Democracy Goes Global 290 ii. German Postwar Liberals: The 1949 Basic Law as Liberal Democracy's Exemplary Charter 302 iii. Beveridge: Liberalism and Welfare 312 12 Liberal Thinking after 1945 316 i. Oakeshott and Berlin: Letting Politics Alone and "Negative" Liberty 317 ii. Hayek (iii): Political Antipolitics 327 iii. Orwell, Camus, and Sartre: Liberals in the Cold War 332 iv. Rawls: Justifying Liberalism 338 v. Nozick, Dworkin, and MacIntyre: Responses to Rawls, Rights, and Community 348 13 The Breadth of Liberal Politics in the 1950s-1980s 355 i. Mendes-France, Brandt, and Johnson: Left Liberalism in the 1950s-1960s 355 ii. Buchanan and Friedman: Liberal Economists Against the State 368 iii. Thatcher, Reagan, Mitterrand, and Kohl: Right Liberalism in the 1970s-1980s 378 PART FOUR After 1989 391 Coda Liberal Dreams in the Twenty-First Century 392 Works Consulted 409 Name Index 433 Subject Index 444