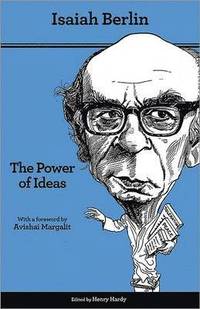 The Power of Ideas

av Isaiah Berlin, Henry Hardy
Häftad Engelska, 2013-11-10
259
Köp
Spara som favorit
Specialorder (osäker tillgång). Skickas inom 11-20 vardagar.
Gratis frakt inom Sverige över 159 kr för privatpersoner.
Finns även som
Visa alla 1 format & utgåvor
The essays collected in this new volume reveal Isaiah Berlin at his most lucid and accessible. He was constitutionally incapable of writing with the opacity of the specialist, but these shorter, more introductory pieces provide the perfect starting-point for the reader new to his work. Those who are already familiar with his writing will also be grateful for this further addition to his collected essays. The connecting theme of these essays, as in the case of earlier volumes, is the crucial social and political role--past, present and future--of ideas, and of their progenitors. A rich variety of subject-matters is represented--from philosophy to education, from Russia to Israel, from Marxism to romanticism--so that the truth of Heine's warning is exemplified on a broad front. It is a warning that Berlin often referred to, and provides an answer to those who ask, as from time to time they do, why intellectual history matters. Among the contributions are "My Intellectual Path," Berlin's last essay, a retrospective autobiographical survey of his main preoccupations; and "Jewish Slavery and Emancipation," the classic statement of his Zionist views, long unavailable in print. His other subjects include the Enlightenment, Giambattista Vico, Vissarion Belinsky, Alexander Herzen, G.V. Plekhanov, the Russian intelligentsia, the idea of liberty, political realism, nationalism, and historicism. The book exhibits the full range of his enormously wide expertise and demonstrates the striking and enormously engaging individuality, as well as the power, of his own ideas. "Over a hundred years ago, the German poet Heine warned the French not to underestimate the power of ideas: philosophical concepts nurtured in the stillness of a professor's study could destroy a civilization."--Isaiah Berlin, Two Concepts of Liberty, 1958. This new edition adds a number of previously uncollected pieces, including Berlin's earliest statement of the pluralism of values for which he is famous.
Visa hela texten

Avishai Margalit, Winner of the 2012 Ernst-Bloch-Prize "A volume which covers the key areas of Berlin's interests in an unusually accessible way; it will take its place as, quite simply, the best short introduction to his thinking... [A]ll the arguments most closely associated with Berlin--above all, about freedom and human values--can be found here."--Noel Malcolm, Sunday Telegraph (London) "Berlin's views on such disparate topics as Marxism, romanticism, liberty and Zionism are all covered in this excellent collection of his essays... Ideas aren't what they used to be, but there is no one better able than Berlin to relate their glorious and not so glorious history. Each of the essays fulfils Raymond Carver's criterion for the short story: to leave the reader's body temperature a degree higher or lower than when the book was opened."--Nicholas Fearn, Independent on Sunday (London) "If he did nothing else, Berlin put the ideas back into history... This posthumous collection, containing some of his best work, show how seriously he took the task of inspiring the general reader."--Daniel Johnson, Daily Telegraph "The collection is thoroughly eclectic and engaging to read. You never know what the next morsel will taste of and, like a delectable plate of appetisers, the variety whets the appetite."--Judith Armstrong, Australian's Review of Books

Isaiah Berlin (1909-1997) was one of the leading intellectual historians of the twentieth century and the founding president of Wolfson College, University of Oxford. His many books include The Hedgehog and the Fox, The Crooked Timber of Humanity, The Roots of Romanticism, and Against the Current (all Princeton). Henry Hardy, a Fellow of Wolfson College, Oxford, is one of Isaiah Berlin's literary trustees. He has edited several other volumes by Berlin, and is currently preparing Berlin's letters and remaining unpublished writings for publication.

Note on References xiForeword by Avishai Margalit xiiiEditor's Preface xxvMy Intellectual Path 1The Purpose of Philosophy 29The Philosophers of the Enlightenment 43One of the Boldest Innovators in the History of Human Thought 63Russian Intellectual History 81The Man Who Became a Myth 95A Revolutionary without Fanaticism 106The Role of the Intelligentsia 125Liberty 134The Philosophy of Karl Marx 139The Father of Russian Marxism 153Realism in Politics 163The Origins of Israel 173Jewish Slavery and Emancipation 197Chaim Weizmann's Leadership 227The Search for Status 238The Essence of European Romanticism 243Meinecke and Historicism 249General Education 260Appendix to the Second EditionDemocracy, Communism and the Individual 273Woodrow Wilson on Education 284A Note on Nationalism 301Index 313