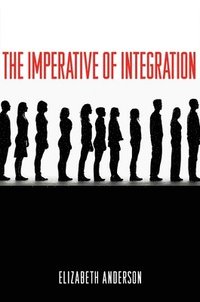 The Imperative of Integration

av Elizabeth Anderson
Häftad Engelska, 2013-04-21
212
Köp
Spara som favorit
Finns även som
Visa alla 2 format & utgåvor
More than forty years have passed since Congress, in response to the Civil Rights Movement, enacted sweeping antidiscrimination laws in the Civil Rights Act of 1964, the Voting Rights Act of 1965, and the Fair Housing Act of 1968. As a signal achievement of that legacy, in 2008, Americans elected their first African American president. Some would argue that we have finally arrived at a postracial America, but The Imperative of Integration indicates otherwise. Elizabeth Anderson demonstrates that, despite progress toward racial equality, African Americans remain disadvantaged on virtually all measures of well-being. Segregation remains a key cause of these problems, and Anderson skillfully shows why racial integration is needed to address these issues. Weaving together extensive social science findings--in economics, sociology, and psychology--with political theory, this book provides a compelling argument for reviving the ideal of racial integration to overcome injustice and inequality, and to build a better democracy. Considering the effects of segregation and integration across multiple social arenas, Anderson exposes the deficiencies of racial views on both the right and the left. She reveals the limitations of conservative explanations for black disadvantage in terms of cultural pathology within the black community and explains why color blindness is morally misguided. Multicultural celebrations of group differences are also not enough to solve our racial problems. Anderson provides a distinctive rationale for affirmative action as a tool for promoting integration, and explores how integration can be practiced beyond affirmative action. Offering an expansive model for practicing political philosophy in close collaboration with the social sciences, this book is a trenchant examination of how racial integration can lead to a more robust and responsive democracy.
Visa hela texten

Winner of the 2011 Joseph B. Gittler Award, The American Philosophical Association One of Choice's Significant University Press Titles for Undergraduates for 2010-2011 "[A] real tour de force of philosophical argumentation utilizing social science data."--Brian Leiter, Leiter Reports blog "[T]his book is an impressive addition to the growing literature in so-called 'non-ideal' political theory, which as Anderson herself notes, begins 'from a diagnosis of injustices in our actual world, rather than from a picture of an ideal world.'"--Andrew Peirce, Philosophy in Review "There are social, academic and economic benefits to integration--the evidence for which is so powerfully represented in Elizabeth Andreson's award-winning book, The Imperative of Integration."--Jonathan Jansen, The Times

Elizabeth Anderson is the John Rawls Collegiate Professor of Philosophy and Women's Studies at the University of Michigan, Ann Arbor. She is the author of Value in Ethics and Economics.