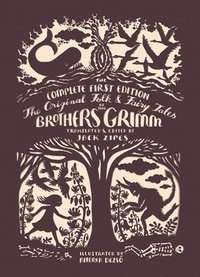 The Original Folk and Fairy Tales of the Brothers Grimm

av Jacob Grimm, Wilhelm Grimm
(1 röst)
Inbunden Engelska, 2014-10-19
299
Köp
Spara som favorit
Skickas inom 7-10 vardagar.
Gratis frakt inom Sverige över 159 kr för privatpersoner.
Finns även som
Visa alla 2 format & utgåvor
When Jacob and Wilhelm Grimm published their Children's and Household Tales in 1812, followed by a second volume in 1815, they had no idea that such stories as "Rapunzel," "Hansel and Gretel," and "Cinderella" would become the most celebrated in the world. Yet few people today are familiar with the majority of tales from the two early volumes, since in the next four decades the Grimms would publish six other editions, each extensively revised in content and style. For the very first time, The Original Folk and Fairy Tales of the Brothers Grimm makes available in English all 156 stories from the 1812 and 1815 editions. These narrative gems, newly translated and brought together in one beautiful book, are accompanied by sumptuous new illustrations from award-winning artist Andrea Dezso. From "The Frog King" to "The Golden Key," wondrous worlds unfold--heroes and heroines are rewarded, weaker animals triumph over the strong, and simple bumpkins prove themselves not so simple after all. Esteemed fairy tale scholar Jack Zipes offers accessible translations that retain the spare description and engaging storytelling style of the originals. Indeed, this is what makes the tales from the 1812 and 1815 editions unique--they reflect diverse voices, rooted in oral traditions, that are absent from the Grimms' later, more embellished collections of tales. Zipes's introduction gives important historical context, and the book includes the Grimms' prefaces and notes. A delight to read, The Original Folk and Fairy Tales of the Brothers Grimm presents these peerless stories to a whole new generation of readers.
Visa hela texten

One of Choice's Outstanding Academic Titles for 2015 One of The Independent's Best Books of 2014 One of South China Morning Post's Best Books of 2014 One of The Globe and Mail 75 Book Ideas for Christmas 2014 "This collection contains many of the most-loved fairy tales in the history of the form ... The book is a classic, formed like a mosaic of precious small pieces, each one glinting with its own color and character, glass and crystalline, but somehow hard, unyielding."--Marina Warner, New York Review of Books "[A] faithful translation--accompanied by striking black-and-white illustrations, evocative of shadow theatre, by Andrea Dezso... [T]he Grimms are spare, spinning the tales into beautifully wrought short stories."--Francesca Wade, Times Literary Supplement "This new translation ... allows those without German expertise a chance to re-experience familiar stories in all their original Hemingwayesque terseness."--Michael Dirda, Washington Post "[T]he new Zipes translation of the first edition, with all its notes and annotations, is a must, a treasure for anyone with a serious interest in fairy tales, the motifs of which linger perpetually in the collective mind."--Carmel Bird, Sydney Morning Herald "Thoroughly engaging, Zipes' translations into colloquial American English breathe life into these stories. Award-winning artist Andrea Dezso's cut-paper black and white illustrations capture the essence of this strange and enchanting world that will entice fans of mystical realms and those interested in better understanding the Grimms' enduring influence on literature."--Barbara Basbanes Richter, Fine Books & Collections "[M]agnificent ... what makes this newly released original volume especially enchanting are the breathtaking illustrations by Romanian-born artist Andrea Dezso."--Maria Popova, Brain Pickings "Zipes, who edited and translated the new collection, has done splendid work, first in arguing for the early tales' significance... Zipes' most important achievement, though, is simply putting the complete, uncensored tales before readers to judge for themselves... The Original Folk and Fairy Tales--beautifully illustrated by Andrea Dezso, by the way--isn't the Disneyfied version of the Brothers Grimm that we all grew up with. But for readers whose tastes lean more to, say, Tim Burton, wading into the collection might feel like stumbling into an agreeably dark and Gothic forest."--Doug Childers, Richmond Times-Dispatch "Never before published in English, the first edition of the Brothers Grimms' tales reveals an unsanitised version of the stories that have been told at bedtime for more than 200 years... His version of the original 156 stories ... shows a very different side to the well-known tales, as well as including some gruesome new additions."--Alison Flood, The Guardian "[R]emarkable... Zipes's introduction ... is illuminating... This is the uncut Brothers Grimm: shocking, funny, and at times downright weird."--Rebecca K. Morrison, Independent "[B]eguiling collections that are both a showcase of the enduring fascination with tales of the marvelous and strange and a celebration of those scholars who continue to research the realm of folklore. They unearth gems, and further our understanding of the stories and storytellers' place in the cultural history of their respective countries and, more broadly, in the universal human need to tell and listen to stories... The rewards of these collections are irresistible."--Rebecca K. Morrison, Independent "The new book, published by Princeton University Press, offers a fascinating insight into how the collection has changed with the times."--Nick Enoch, Mail Online "Think you know fairy tales? Be prepared for a nasty shock."--Andrew Donaldson, Rand Daily Mail "Zipes has produced the inaugural English translation of the two original volumes in a gutsy,

Jack Zipes is the translator of The Complete Fairy Tales of the Brothers Grimm (Bantam), the editor of The Great Fairy Tale Tradition (Norton), and the author of Grimm Legacies (Princeton). He is professor emeritus of German and comparative literature at the University of Minnesota. Andrea Dezso is a visual artist who exhibits in museums and galleries worldwide and is associate professor of art at Hampshire College.