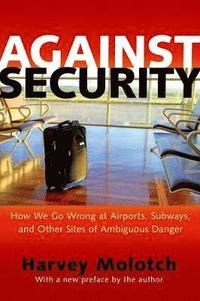 How We Go Wrong at Airports, Subways, and Other Sites of Ambiguous Danger - Updated Edition

av Harvey Molotch
Häftad Engelska, 2014-08-24
179
Köp
Spara som favorit
Finns även som
Visa alla 1 format & utgåvor
The inspections we put up with at airport gates and the endless warnings we get at train stations, on buses, and all the rest are the way we encounter the vast apparatus of U.S. security. Like the wars fought in its name, these measures are supposed to make us safer in a post-9/11 world. But do they? Against Security explains how these regimes of command-and-control not only annoy and intimidate but are counterproductive. Sociologist Harvey Molotch takes us through the sites, the gizmos, and the politics to urge greater trust in basic citizen capacities--along with smarter design of public spaces. In a new preface, he discusses abatement of panic and what the NSA leaks reveal about the real holes in our security.
Visa hela texten

Winner of the 2012 PROSE Award in Sociology & Social Work, Association of American Publishers One of Choice's Outstanding Academic Titles for 2013 "Mr. Molotch ... present(s) a vivid picture of the ways in which poorly designed security measures can deform everyday life and defeat themselves."--Jordan Ellenberg, Wall Street Journal "America's obsession with safety makes us angry, alienated, and ultimately less safe, argues this penetrating study of public security. Sociologist Molotch criticizes a range of security structures and protocols: airport security gates that require useless and humiliating body searches while generating long lines that make tempting targets for terrorists; ill-conceived New Orleans water projects that precipitated the Hurricane Katrina flood, and the militarized disaster response that further endangered residents. Even gender-segregated public restrooms (co-ed restrooms, he contends, would be more convenient and safer for women). Molotch recommends simple hardware and procedural improvements, from better stairways and signage to assist evacuations to customer-service regimens that help employees spot trouble. More than that, he argues for a conceptual shift away from rigid, rule-bound 'command and control' toward a security philosophy that empowers ordinary people to handle crises through spontaneous order and mutual aid. Molotch shrewdly analyzes the ways in which anxious, stressed-out people interact with their physical and social environments in a lively, engaging prose that skewers the verities of the post-9/11 security state. The result is a far-reaching re-examination of our culture of public fear, one that stands conventional wisdom on its head."--Publishers Weekly "The author is concerned with the complex systems that permit us to feel safe in public places. He traces a path from public toilet facilities through subways and airports to the reconstruction of Ground Zero before taking on the catastrophic effects of nature in the hurricane damage and flooding of New Orleans in 2005. Molotch treats each phase of the narrative separately and considers the design and organization of space, entries, and exits, fields of vision and patterns of activity, whether encouraged or not. The author's approach to public spaces as an environment permits an insightful, provocative treatment of whether the security we seek is fostered or not--and if so, how... A humane, well-researched examination of privacy and security issues."--Kirkus Reviews "Against Security is an interesting book that will appeal to all sorts of readers, published by a prestigious academic press, and retaining some of the trappings of a serious academic study. It never falters in presenting interesting and thought-provoking stories, which will make it attractive to an audience much broader than social scientists."--David E. Spiro, New York Journal of Books "Terrorism is the weapon of the disaffected; it has been invented; it cannot be disinvented. Public pressure and the politicians' need to be seen to 'do something' will bring more security counter-measures. Molotch is right to say that their conduct must be improved."--Omar Malik, Times Higher Education "In Against Security, Molotch takes aim at a 'command-and-control' approach to subway and airport safety, flood protection, and the war on terror. He makes a compelling case that security requires 'considered judgments based on empirical evidence cleansed of anxieties of fear and vengeance.' And he suggests specific changes, small and large, to enhance safety without diminishing civil liberties or the everyday enjoyment of life, that deserve our attention."--Barron's "Molotch is not anti-security; he calls for and offers some suggestions for better designs and architecture. A challenging book, then, to spark thought among all security people."--Professional Security Magazine "A lot of psychological research has

Harvey Molotch is professor of sociology and metropolitan studies at New York University. His other books include the classic Urban Fortunes and the more recent Where Stuff Comes From.