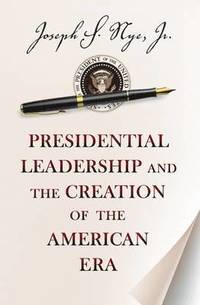 Presidential Leadership and the Creation of the American Era

av Joseph S Nye
Häftad Engelska, 2014-08-31
219
Köp
Spara som favorit
Skickas inom 7-10 vardagar.
Fri frakt inom Sverige för privatpersoner.
Finns även som
Visa alla 2 format & utgåvor
This book examines the foreign policy decisions of the presidents who presided over the most critical phases of America's rise to world primacy in the twentieth century, and assesses the effectiveness and ethics of their choices. Joseph Nye, who was ranked as one of Foreign Policy magazine's 100 Top Global Thinkers, reveals how some presidents tried with varying success to forge a new international order while others sought to manage America's existing position. The book shows how transformational presidents like Wilson and Reagan changed how America sees the world, but argues that transactional presidents like Eisenhower and the elder Bush were sometimes more effective and ethical. It also draws important lessons for today's uncertain world, in which presidential decision making is more critical than ever.
Visa hela texten

"In this concise and readable study of American presidential foreign policy decisions, Kennedy School of Government professor Nye (The Future of Power) asks, 'To what extent were the men who presided over the creation of the American era simply responding, or were they shaping events?' Nye examines eight administrations, defined as 'transformational' or 'transactional,' and the diverse ways presidents communicate with and inspire the public. He also entices the historically minded with a 'What if?' section that speculates on historical alternatives and provides worthwhile reflections on the uneasy relationship between ethical leadership and effective leadership. Besides risking controversy, his ethical scorecards of presidents--including Theodore Roosevelt and Woodrow Wilson--illustrate the complexity of such judgments. Nye's overall assessment that the most dramatic and inspiring presidents are not always the most effective or ethical may, as he notes, overturn conventional wisdom, but the judgment bolsters his admonition to President Obama. His concluding reflections on the changing nature of exercising power in the 21st century effectively contextualize the continuing tensions inherent in managing domestic and international authority."--Publishers Weekly "Sometimes the best presidential decisions are decisions not to act. This point is made in an excellent new book by Joseph Nye of Harvard University entitled Presidential Leadership and the Creation of the American Era."--Gideon Rachman, Financial Times "[A] timely book."--The Economist "A thoughtful analysis of different styles of presidential leadership in foreign affairs. Nye, a Harvard professor, is an enemy of the 'vision thing', concluding that 'there is little evidence ... that transformational foreign policy leaders are better in either ethics or effectiveness'. His heroes are experienced pragmatists such as Eisenhower and the first Bush."--Financial Times, "Books of the Year So Far" Summer Reading Guide "The US presidency sounds far more powerful than it usually is. Scholars, journalists and presidents routinely exaggerate its potency. Joseph Nye's slim volume on presidential leadership offers an elegant antidote to many of the myths."--Edward Luce, Financial Times "[Nye writes] clearly and succinctly, rendering difficult propositions accessible."--Raymond Seitz, Literary Review "Nye's book is a whisper in the ear of the American president in the twenty-first century to rethink how to be a more effective leader."--Inderjeet Parmar, International Affairs "Short, tightly focused, and useful."--Walter Russell Mead, Foreign Affairs "Nye's book originated in a course he has taught, and it bears the thought provoking marks of a stimulating advanced class."--H. W. Brands, Political Science Quarterly "[T]he book's central message and concluding advice should be chiseled in stone above the entrance to the Oval Office."--John L. Harper, Survival