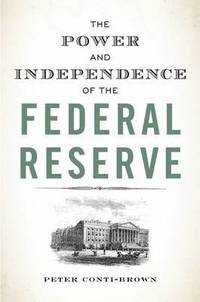 The Power and Independence of the Federal Reserve

av Peter Conti-Brown
Inbunden Engelska, 2016-01-26
296
Köp
Spara som favorit
Kan levereras innan julafton!
Finns även som
Visa alla 3 format & utgåvor
The independence of the Federal Reserve is considered a cornerstone of its identity, crucial for keeping monetary policy decisions free of electoral politics. But do we really understand what is meant by "Federal Reserve independence"? Using scores of examples from the Fed's rich history, The Power and Independence of the Federal Reserve shows that much common wisdom about the nation's central bank is inaccurate. Legal scholar and financial historian Peter Conti-Brown provides an in-depth look at the Fed's place in government, its internal governance structure, and its relationships to such individuals and groups as the president, Congress, economists, and bankers. Exploring how the Fed regulates the global economy and handles its own internal politics, and how the law does--and does not--define the Fed's power, Conti-Brown captures and clarifies the central bank's defining complexities. He examines the foundations of the Federal Reserve Act of 1913, which established a system of central banks, and the ways that subsequent generations have redefined the organization. Challenging the notion that the Fed Chair controls the organization as an all-powerful technocrat, he explains how institutions and individuals--within and outside of government--shape Fed policy. Conti-Brown demonstrates that the evolving mission of the Fed--including systemic risk regulation, wider bank supervision, and as a guardian against inflation and deflation--requires a reevaluation of the very way the nation's central bank is structured. Investigating how the Fed influences and is influenced by ideologies, personalities, law, and history, The Power and Independence of the Federal Reserve offers a clear picture of this uniquely important institution.
Visa hela texten

One of Financial Times (FT.com) Best Books of 2016 "Mr. Conti-Brown, a gifted legal historian who teaches at the Wharton School of the University of Pennsylvania, ... has accomplished two near impossibilities: He has opened up new areas of inquiry on an overworn topic, and he has made them intellectually rigorous as well as riveting to read about."--Kevin A. Hassett, Wall Street Journal "With plenty in the media recently about Federal Reserve Chairwoman Janet Yellen and attempts to raise interest rates, [The Power and Independence of the Federal Reserve] could not have come at a more opportune time. Readers concerned with monetary policy and the role of the Federal Reserve will discover that this specialized title has much to offer."--Library Journal "[A] stimulating book... Conti-Brown gives us much food for thought about how central banks go about their work."--David Green, Financial World "Conti-Brown's clear analysis and elegant language make the book a fascinating read."--Biz Ed Magazine "Conti-Brown makes a compelling case for change."--Michael Reddell, Central Banking Journal "He explains clearly how complex relationships shape the Fed's independence in a meticulous study of its political, economic and constitutional history."--Philip Augar, Financial Times "Peter's book should spur lawyers and academics to think critically about the FOMC's constitutional status. And whether or not we agree with Peter's conclusion, his book will serve to define the terms of the debate."--Daniel Hemel, Yale Journal of Regulation blog "While the topic is complex, layered, and labyrinthine, Conti-Brown's clear analysis and elegant language make the book a fascinating read."--Biz Ed Magazine "This book is an interesting, even scary, account of the governance of the Federal Reserve, with examples of the influence of personalities in ways not anticipated by law."--John H. Wood, EH.Net "Peter Conti-Brown has produced a page-turner that takes the reader through the history, legal framework, economic management and personalities of the U.S. Federal Reserve from its founding in 1913 to Janet Yellen's administration as chairwoman of the august institution. That this is compelling reading speaks to his skill as a writer... This book is that rarest of beasts: serious financial analysis in a wonderfully well written story."--Financial Post "Beginning with its founding, [Conti-Brown] carefully walks readres through the changes to the practice and structure of the Federal Reserve system. In doing so, he has not only a historian's eye for important facts and details but also a lawyer's perspective on administrative law and power relationships. This is one of those books many readers will find illuminating even while disagreeing vehemently with one or two items."--Choice "Excellent... I highly recommend this book for readers interested in the Federal Reserve System."--Scott Sumner, Econlog "Peter Conti-Brown's The Power and Independence of the Federal Reserve (Princeton) is a study of what might be called the Fed's unwritten constitution... For today's Fed leaders, it is a sobering lesson."--Sebastian Mallaby, Financial Times

Peter Conti-Brown is assistant professor of legal studies and business ethics at the Wharton School of the University of Pennsylvania. He is the coeditor of When States Go Broke and Research Handbook on Central Banking.