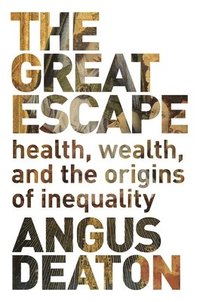 Health, Wealth, and the Origins of Inequality

av Angus Deaton
(3 röster)
Häftad Engelska, 2015-05-26
199
Köp
Spara som favorit
Skickas inom 5-8 vardagar.
Fri frakt inom Sverige för privatpersoner.
Finns även som
Visa alla 2 format & utgåvor
The world is a better place than it used to be. People are healthier, wealthier, and live longer. Yet the escapes from destitution by so many has left gaping inequalities between people and nations. In The Great Escape, Angus Deaton--one of the foremost experts on economic development and on poverty--tells the remarkable story of how, beginning 250 years ago, some parts of the world experienced sustained progress, opening up gaps and setting the stage for today's disproportionately unequal world. Deaton takes an in-depth look at the historical and ongoing patterns behind the health and wealth of nations, and addresses what needs to be done to help those left behind. Deaton describes vast innovations and wrenching setbacks: the successes of antibiotics, pest control, vaccinations, and clean water on the one hand, and disastrous famines and the HIV/AIDS epidemic on the other. He examines the United States, a nation that has prospered but is today experiencing slower growth and increasing inequality. He also considers how economic growth in India and China has improved the lives of more than a billion people. Deaton argues that international aid has been ineffective and even harmful. He suggests alternative efforts--including reforming incentives to drug companies and lifting trade restrictions--that will allow the developing world to bring about its own Great Escape. Demonstrating how changes in health and living standards have transformed our lives, The Great Escape is a powerful guide to addressing the well-being of all nations.
Visa hela texten

Angus Deaton, Winner of the 2015 Nobel Prize in Economics Winner of the 2013 William G. Bowen Award, Industrial Relations Section of Princeton University One of Bloomberg Businessweek's Best Books of 2015, chosen by John Snow One of Bloomberg/Businessweek Best Books of 2013, selected by Christopher L. Eisgruber (president of Princeton University) One of Forbes Magazine's Best Books of 2013 Honorable Mention for the 2013 PROSE Award in Economics, Association of American Publishers Shortlisted for the 2014 Spear's Book Awards in Financial History Longlisted for the 2013 Business Book of the Year Award, Financial Times/Goldman Sachs A "Best Business Book of the Year for 2013" selected on LinkedIn by Matthew Bishop, Economics Editor of The Economist Featured in The Sunday Times 2013 Holiday Roundup "If you want to learn about why human welfare overall has gone up so much over time, you should read The Great Escape: Health, Wealth, and the Origins of Inequality."--Bill Gates "[O]ne of the most succinct guides to conditions in today's world... The story Deaton tells--the most inspiring human story of all--should give all of us reason for optimism, so long as we are willing to listen to its moral."--David Leonhardt, New York Times Book Review "[A]n illuminating and inspiring history of how mankind's longevity and prosperity have soared to breathtaking heights in modern times... [Deaton's] book gives a stirring overview of the economic progress and medical milestones that, starting with the Industrial Revolution and accelerating after World War II, have caused life expectancies to soar."--Fred Andrews, New York Times "[A]n engaging and sure-footed guide to the 'endless dance between progress and inequality ...'"--Martha C. Nussbaum, New Republic "Is the world becoming a fairer as well as a richer place? Few economists are better equipped to answer this question than Angus Deaton of Princeton University, who has thought hard about measuring international well-being and is not afraid to roam through history. Refreshingly, Mr Deaton also reaches beyond a purely economic narrative to encompass often neglected dimensions of progress such as better health... [T]he theme requires a big canvas and bold brushwork, and Mr Deaton capably offers both."--Economist "[E]loquently written and deeply researched... For those interested in world poverty, it is unquestionably the most important book on development assistance to appear in a long time."--Kenneth Rogoff, Project Syndicate "A truly elegant exploration... It offers an erudite sojourn through history, all the way to the domestic and international policy issues pressing in on us today. Unusual for scholarly works in economics, this book is rendered in easily accessible prose, supported by fascinating statistics presented graphically."--Uwe E. Reinhardt, NYTimes.com's Economix blog "[A] masterful account."--Anne-Marie Slaughter, CNN.com "As the title of his book suggests, Deaton sketches out the story of how many people have escaped from poverty and early death. It is a powerful tale. In Deaton's hands, the all too frequently forgotten accomplishments of the last century are given prominence that is both refreshing and welcome."--Edward Hadas, Reuters BreakingViews "The Great Escape combines, to a rare degree, technical sophistication, moral urgency, the wisdom of experience, and an engaging and accessible style. It will deepen both your appreciation of the miracle of modern economic growth and your conviction that the benefits can and should be much more widely enjoyed."--Clive Crook, Bloomberg News "This is a book that deserves to be read by as many people as possible, so that the poverty debates we have in India go beyond ideological grandstanding and the usual television dramatics... The recent years have seen several leading economic thinkers write excellent books for the ordin

Angus Deaton, winner of the 2015 Nobel Prize in economics, is the Dwight D. Eisenhower Professor of Economics and International Affairs in the Woodrow Wilson School of Public and International Affairs and the Economics Department at Princeton University. His many books include The Analysis of Household Surveys and Economics and Consumer Behavior. He is a past president of the American Economic Association.

Preface ix Introduction: What This Book Is About 1 1 The Wellbeing of the World 23 PART I LIFE AND DEATH 2 From Prehistory to 1945 59 3 Escaping Death in the Tropics 101 4 Health in the Modern World 126 PART II MONEY 5 Material Wellbeing in the United States 167 6 Globalization and the Greatest Escape 218 PART III HELP 7 How to Help Those Left Behind 267 Postscript: What Comes Next? 325 Notes 331 Index 351