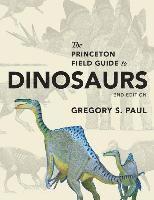 The Princeton Field Guide to Dinosaurs

av Gregory S Paul
Inbunden Engelska, 2016-12-01
289
Köp
Spara som favorit
Skickas inom 7-10 vardagar.
Fri frakt inom Sverige för privatpersoner.
Finns även som
Visa alla 1 format & utgåvor
The best-selling Princeton Field Guide to Dinosaurs remains the must-have book for anyone who loves dinosaurs, from amateur enthusiasts to professional paleontologists. Now extensively revised and expanded, this dazzlingly illustrated large-format edition features some 100 new dinosaur species and 200 new and updated illustrations, bringing readers up to the minute on the latest discoveries and research that are radically transforming what we know about dinosaurs and their world. Written and illustrated by acclaimed dinosaur expert Gregory Paul, this stunningly beautiful book includes detailed species accounts of all the major dinosaur groups as well as nearly 700 color and black-and-white images--skeletal drawings, "life" studies, scenic views, and other illustrations that depict the full range of dinosaurs, from small feathered creatures to whale-sized supersauropods. Paul's extensively revised introduction delves into dinosaur history and biology, the extinction of nonavian dinosaurs, the origin of birds, and the history of dinosaur paleontology, as well as giving a taste of what it might be like to travel back in time to the era when dinosaurs roamed the earth. * Now extensively revised and expanded* Covers nearly 750 dinosaur species, including scores of newly discovered ones* Provides startling new perspectives on the famed Brontosaurus and Tyrannosaurus* Features nearly 700 color and black-and-white drawings and figures, including life studies, scenic views, and skull and muscle drawings* Includes color paleo-distribution maps and a color time line* Describes anatomy, physiology, locomotion, reproduction, and growth of dinosaurs, as well as the origin of birds and the extinction of nonavian dinosaurs
Visa hela texten

One of Choice's Outstanding Academic Titles for 2011 One of the Library Journal's Best Reference (Print, Electronic, and Free Reference Resources) in the Sciences category, for 2009 Honorable Mention for the 2010 PROSE Award in Single Volume Reference/Science, Association of American Publishers "Mr. Paul's book takes up the task of bringing readers up to date with the current view of these animals, adding a spate of new species that have popped up since its initial publication in 2010... But Mr. Paul's book is more than simply a lavishly illustrated compendium... Name a dinosaur and you're likely to find it in [The Princeton Field Guide to Dinosaurs, Second Edition], detailed with vital statistics about size, where it lived and how much of the skeleton is known. You'll also find skeletal diagrams, fleshed-out profiles and classic pieces of Mr. Paul's distinctive art... [This book shows] the unexpected variety that life is capable of and raise[s] the question of what the next 235 million years will bring."--Brian Switek, Wall Street Journal "You'll never need to decide whether that massive beast lumbering through your front yard is Chasmosaurus belli or C. sternbergi, but if you did, this would be a handy book to have on your windowsill... [A]s dinosaur guidebooks go, this is as carefully assembled and authoritative as they come."--Laurence A. Marschall, Natural History "Artist and researcher Gregory S. Paul describes hundreds of dinosaur species in this richly illustrated compendium. Learn how beasts ranging from Allosaurus to zuniceratops grew, moved and reproduced--and how they eventually went extinct."--Scientific American "Given the vibrant state of dinosaur science, any book about them is going to be out-of-date by the time it hits shelves, but Gregory Paul's new The Princeton Field Guide to Dinosaurs is a useful yearbook of dinosaurs which includes a variety of rarely-mentioned species... Indeed, Paul is to be credited for pulling so much information together into one volume, as well as for illustrating so many skeletons (some dinosaurs no doubt discovered while the book was in press.)"--Brian Switek, SmithsonianMag.com's Dinosaur Tracking blog "The publication of Gregory Paul's The Princeton Field Guide to Dinosaurs is cause for celebration for all who share a fascination with this diverse family of animals. Paul's field guide is (perhaps) the most comprehensive one-volume guide to what we know about 735 species of dinosaurs. The book includes an outstanding ... introduction summarizing the history of dinosaurs research, evolution, biology, energetics, behavior, and distribution. It includes a discussion of the most arresting feature of dinosaurs--their great size... The heart of the book is a richly illustrated field guide which is organized like any of the field guides that we have become accustomed to. The species are presented in phylogenic order and meticulously and beautifully illustrated following the current state of our knowledge of posture and shape."--Wayne Mones, AudubonMagazine.org blog "World-renowned dinosaur illustrator and researcher Gregory Paul provides comprehensive visual and textual coverage of the dinosaurs in this lavishly illustrated field guide. Incorporating the latest discoveries and research that are radically transforming what we know about dinosaurs, this book is distinguished both by its scientific accuracy and the quality and quantity of its illustrations... The Princeton Field Guide to Dinosaurs is a must-have for anyone who loves dinosaurs, from the amateur enthusiast to the professional paleontologist."--Prehistoric Times "Lavishly filled with fossil forms and drawn interpretations of their outward appearance, the guide covers the entire spectrum of dinosaur species. The color images of some of the rock stars of the Age of Dinosaurs, from T-Rex to Triceratops, will enthrall any youngster with a yen for these ancient beas

Gregory S. Paul is a leading dinosaur illustrator and researcher who helped establish the "new look" of the Mesozoic creatures seen in contemporary documentaries and movies, including Jurassic Park, for which he served as a consultant. His books include Predatory Dinosaurs of the World: A Complete Illustrated Guide. His work has appeared in Scientific American, Nature, the New York Times, and many other publications.