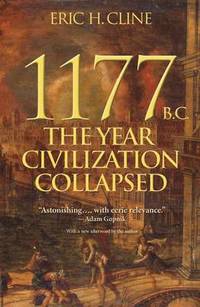 av Eric H Cline
(4 röster)
Häftad Engelska, 2015-09-22
169
Köp
Spara som favorit
Skickas inom 7-10 vardagar.
Fri frakt inom Sverige för privatpersoner.
Finns även som
Visa alla 2 format & utgåvor
In 1177 B.C., marauding groups known only as the "Sea Peoples" invaded Egypt. The pharaoh's army and navy managed to defeat them, but the victory so weakened Egypt that it soon slid into decline, as did most of the surrounding civilizations. After centuries of brilliance, the civilized world of the Bronze Age came to an abrupt and cataclysmic end. Kingdoms fell like dominoes over the course of just a few decades. No more Minoans or Mycenaeans. No more Trojans, Hittites, or Babylonians. The thriving economy and cultures of the late second millennium B.C., which had stretched from Greece to Egypt and Mesopotamia, suddenly ceased to exist, along with writing systems, technology, and monumental architecture. But the Sea Peoples alone could not have caused such widespread breakdown. How did it happen? In this major new account of the causes of this "First Dark Ages," Eric Cline tells the gripping story of how the end was brought about by multiple interconnected failures, ranging from invasion and revolt to earthquakes, drought, and the cutting of international trade routes. Bringing to life the vibrant multicultural world of these great civilizations, he draws a sweeping panorama of the empires and globalized peoples of the Late Bronze Age and shows that it was their very interdependence that hastened their dramatic collapse and ushered in a dark age that lasted centuries. A compelling combination of narrative and the latest scholarship, 1177 B.C. sheds new light on the complex ties that gave rise to, and ultimately destroyed, the flourishing civilizations of the Late Bronze Age--and that set the stage for the emergence of classical Greece.
Visa hela texten

Winner of the 2014 Award for the Best Popular Book, American Schools of Oriental Research One of The New York Post's Best Books of 2014 Honorable Mention for the 2015 PROSE Award in Archeology & Anthropology, Association of American Publishers One of The Federalist's Notable Books of 2015 One of The Australian's Best Books of the Year in 2014, chosen by filmmaker Bruce Beresford Selected as the 'Book of the Semester' Fall 2016, David M. Kennedy Center for International Studies at Brigham Young University "The memorable thing about Cline's book is the strangely recognizable picture he paints of this very faraway time... It was as globalized and cosmopolitan a time as any on record, albeit within a much smaller cosmos. The degree of interpenetration and of cultural sharing is astonishing."--Adam Gopnik, New Yorker [See full review http://bit.do/Cline-NY-Gopnik] "A fascinating look at the Late Bronze Age, proving that whether for culture, war, economic fluctuations or grappling with technological advancement, the conundrums we face are never new, but merely renewed for a modern age."--Larry Getlen, New York Post [See full review http://bit.do/Cline-NYP-Getlen] "Cline has created an excellent, concise survey of the major players of the time, the latest archaeological developments, and the major arguments, including his own theories, regarding the nature of the collapse that fundamentally altered the area around the Mediterranean and the Near East."--Evan M. Anderson, Library Journal [See full review http://bit.do/Cline-LibJourn-Anderson] "Fresh and engaging."--Andrew Robinson, Current World Archaeology "This enthralling book describes one of the most dramatic and mysterious processes in the history of mankind--the collapse of the Bronze Age civilizations. Cline walks us through events that transpired three millennia ago, but as we follow him on this intriguing sojourn, lurking in the back of our minds are tantalizing, perpetual questions: How can prosperous cultures disappear? Can this happen again; to us?"--Israel Finkelstein, coauthor of The Bible Unearthed: Archaeology's New Vision of Ancient Israel and the Origin of Its Sacred Texts "1177 B.C. tells the story of one of history's greatest mysteries... [It] is the finest account to date of one of the turning points in history."--Ian Morris, author of Why the West Rules--for Now "The 12th century BCE is one of the watershed eras of world history. Empires and kingdoms that had dominated late Bronze Age western Asia and the eastern Mediterranean collapsed."--Choice [See full review http://bit.do/Cline-Choice] "Cline explores a vast array of variables that could have led to the disruption of the society of this era, including earthquakes, famines, droughts, warfare, and, most notably, invasions by the 'Sea Peoples.'"--Publishers Weekly [See full review http://bit.do/Cline-PW] "A detailed but accessible synthesis... [O]ffers students and the interested lay antiquarian a sense of the rich picture that is emerging from debates among the ruins."--Scott McLemee, Inside Higher Ed [See full review http://bit.do/Cline-IHE-McLemee] "In this enjoyable new book, Eric H. Cline has set himself an ambitious task: Not only must he educate a popular audience about the wealth and power of the eastern Mediterranean civilizations of the Bronze Age, he must then make his readers care that, some time around the year 1200 B.C., these empires, kingdoms, and cities suffered a series of cataclysms from which they never recovered."--Susan Kristol, Weekly Standard "A wonderful example of scholarship written for the non-expert. Cline clearly pulls together the engaging story of the interactions among the major empires of the Late Bronze Age and puts forth a reasonable theory explaining why they seem to have evaporated as quickly as moisture on a hot afternoon."--Fred Reiss, San Diego Jewish World &

Eric H. Cline is professor of classics and anthropology and director of the Capitol Archaeological Institute at George Washington University.

List of Illustrations xi Series Editor's Foreword xiii Preface xv Acknowledgments xix Prologue The Collapse of Civilizations: 1177 BC 1 Chapter One Act I. Of Arms and the Man: The Fifteenth Century BC 14 Chapter Two Act II. An (Aegean) Affair to Remember: The Fourteenth Century BC 43 Chapter Three Act III. Fighting for Gods and Country: The Thirteenth Century BC 73 Chapter Four Act IV. The End of an Era: The Twelfth Century BC 102 Chapter Five A "Perfect Storm" of Calamities? 139 Epilogue The Aftermath 171 Afterword to the Paperback Edition 177 Dramatis Personae 181 Notes 185 Bibliography 205 Index 233