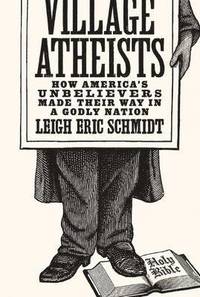 How America's Unbelievers Made Their Way in a Godly Nation

av Leigh Eric Schmidt
Inbunden Engelska, 2016-10-04
299
Köp
Spara som favorit
Finns även som
Visa alla 2 format & utgåvor
A much-maligned minority throughout American history, atheists have been cast as a threat to the nation's moral fabric, barred from holding public office, and branded as irreligious misfits in a nation chosen by God. Yet, village atheists--as these godless freethinkers came to be known by the close of the nineteenth century--were also hailed for their gutsy dissent from stultifying pieties and for posing a necessary secularist challenge to majoritarian entanglements of church and state. Village Atheists explores the complex cultural terrain that unbelievers have long had to navigate in their fight to secure equal rights and liberties in American public life. Leigh Eric Schmidt rebuilds the history of American secularism from the ground up, giving flesh and blood to these outspoken infidels, including itinerant lecturer Samuel Porter Putnam; rough-edged cartoonist Watson Heston; convicted blasphemer Charles B. Reynolds; and atheist sex reformer Elmina D. Slenker. He describes their everyday confrontations with devout neighbors and evangelical ministers, their strained efforts at civility alongside their urge to ridicule and offend their Christian compatriots. Schmidt examines the multilayered world of social exclusion, legal jeopardy, yet also civic acceptance in which American atheists and secularists lived. He shows how it was only in the middle decades of the twentieth century that nonbelievers attained a measure of legal vindication, yet even then they often found themselves marginalized on the edges of a God-trusting, Bible-believing nation. Village Atheists reveals how the secularist vision for the United States proved to be anything but triumphant and age-defining for a country where faith and citizenship were--and still are--routinely interwoven.
Visa hela texten

"This well-written and lively text will be of interest to both scholars and more general readers with an interest in American irreligion."--Publishers Weekly (starred review) "A felicitous, informative story from a highly knowledgeable author."--Kirkus "Schmidt offers an entertaining yet educational read for those interested in America's secular history and the struggles many faced to become vocal freethinkers without persecution."--Library Journal "Noteworthy."--Tyler Cowen, Marginal Revolution "An engaging examination of unbelief in the 19th and early 20th centuries at the grassroots."--Glenn C. Altschuler, Tulsa World "Village Atheists engagingly explores a persecuted American minority."--John Garratt, PopMatters "His deep reading in letters from small-town citizens to the editors of infidel journals--a major source of the anecdotes in Village Atheists--prove that irreligion existed in all areas of the country, including what would become the Bible Belt."--Allison Miller, Perspectives on History "Schmidt's rich, deep exploration of atheist thinkers in 19th-century America contextualizes questions pressing on American Christianity today."--Choice "The extensive research and clear writing in Village Atheists provides significant enlightenment about our history."--Mark Kolsen, American Atheist "For anyone interested in the birth, growth, and development of grassroots secularism in the United States--and the leading lights of American atheism long before Sam Harris or Madalyn Murray O'Hair--this book is an absolute must."--Phil Zuckerman, Los Angeles Review of Books

Leigh Eric Schmidt is the Edward C. Mallinckrodt Distinguished University Professor at the John C. Danforth Center on Religion and Politics at Washington University in St. Louis. His books include Restless Souls: The Making of American Spirituality and Heaven's Bride: The Unprintable Life of Ida C. Craddock, American Mystic, Scholar, Sexologist, Martyr, and Madwoman. He lives in St. Louis.

List of Illustrations ix Preface xiii Introduction: The Making of the Village Atheist 1 Chapter 1 The SECULAR PILGRIM or, The Here without the Hereafter 25 Chapter 2 The CARTOONIST or, The Visible Incivility of Secularism 73 Chapter 3 The BLASPHEMER or, The Riddle of Irreligious Freedom 171 Chapter 4 The OBSCENE ATHEIST or, The Sexual Politics of Infidelity 210 Epilogue: The Nonbeliever Is Entitled to Go His Own Way 249 Notes 285 Index 329