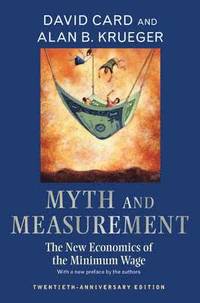 The New Economics of the Minimum Wage - Twentieth-Anniversary Edition

av David Card, Alan B Krueger
Häftad Engelska, 2015-12-22
269
Köp
Spara som favorit
Skickas inom 7-10 vardagar.
Fri frakt inom Sverige för privatpersoner.
Finns även som
Visa alla 1 format & utgåvor
David Card and Alan B. Krueger have already made national news with their pathbreaking research on the minimum wage. Here they present a powerful new challenge to the conventional view that higher minimum wages reduce jobs for low-wage workers. In a work that has important implications for public policy as well as for the direction of economic research, the authors put standard economic theory to the test, using data from a series of recent episodes, including the 1992 increase in New Jersey's minimum wage, the 1988 rise in California's minimum wage, and the 1990-91 increases in the federal minimum wage. In each case they present a battery of evidence showing that increases in the minimum wage lead to increases in pay, but no loss in jobs. A distinctive feature of Card and Krueger's research is the use of empirical methods borrowed from the natural sciences, including comparisons between the "treatment" and "control" groups formed when the minimum wage rises for some workers but not for others. In addition, the authors critically reexamine the previous literature on the minimum wage and find that it, too, lacks support for the claim that a higher minimum wage cuts jobs. Finally, the effects of the minimum wage on family earnings, poverty outcomes, and the stock market valuation of low-wage employers are documented. Overall, this book calls into question the standard model of the labor market that has dominated economists' thinking on the minimum wage. In addition, it will shift the terms of the debate on the minimum wage in Washington and in state legislatures throughout the country. With a new preface discussing new data, Myth and Measurement continues to shift the terms of the debate on the minimum wage.
Visa hela texten

"Our understanding of wage determination has been transformed by an intellectual revolution... Until the Card-Krueger study, most economists, myself included, assumed that raising the minimum wage would have a clear negative effect on employment. But they found, if anything, a positive effect. Their result has since been confirmed using data from many episodes. There's just no evidence that raising the minimum wage costs jobs, at least when the starting point is as low as it is in modern America."--Paul Krugman, New York Times "Card and Krueger didn't just question the conventional wisdom; they attacked it in a novel and powerful way. Instead of concocting a mathematical model and 'testing' it with advanced statistical techniques, which is what most economists call research, they decided to test the theory in the real world... The work of Card and Krueger was worth a hundred theoretical models in The American Economic Review."--John Cassidy, The New Yorker "The Card-Krueger work is essentially correct: the minimum wage at levels observed in the United States has had little or no effect on employment. At the minimum, the book has changed the burden of proof in debates over the minimum, from those who stressed the potential distributional benefits of the minimum to those who stress the potential employment losses."--Richard B. Freeman, Journal of Economic Perspectives "A very substantial book... A highly persuasive collection of evidence... An exemplary book."--J.W. Anderson, The Washington Post "David Card and Alan Krueger have written a book that represents a phenomenal amount of careful and honest research and that will be a classic in the minimum wage literature and also in the broader field of empirical labor economics... A model of how to do good believable research, this book will be influential for a long time."--Paul Osterman, Industrial and Labor Relations Review "Clearly, this book should be read by any economist who wants to stay abreast of substantive, high level debates within the profession... The book already has assumed an important position within the field of labor economics, and significant research in years to come is likely to revolve around its principle thesis."--K. A. Couch, Journal of Economics "... the nastiest, most unspeakable perversion of our service-based economy [is] the declining value of the minimum wage... The downward pressure on wages is making this a country where working literally doesn't pay... David Card and Alan Krueger show through meticulously assembled data that increasing minimum pay in the fast-food industry has no discernable effect on the number of jobs, on consumer prices, or even on employee benefits like free meals... Labor markets, like so many other phenomena in the real world, are far from perfect and do not behave according to the theories of defunct economists."--Joe Conason, The New York Observer "Myth and Measurement ... traverses its ground in great detail, studying every bump and dip in the landscape... But that's just about what the issue requires. Card and Krueger's conclusion runs so against the grain of mainstream economic thinking, not to mention the present political consensus, that overkill seems quite appropriate. That conclusion, reached through a number of separate studies, is this: The minimum wage not only doesn't kill jobs, it may even stimulate employment... Myth and Measurement should be a very important book. It essentially settles the policy debate on the minimum wage, and the economics profession should spend a good bit of time engaging in profound reflection and in testing some of the field's first principles."--Voice Literary Supplement "Card and Krueger have written a powerful book underpinned by hard facts... They explode myths and indict the prescriptions of conventional economic thinkers. Few will read this book from cover to cover, but many will quote its conc

Preface to the Twentieth-Anniversary Edition ix Preface xxvii Chapter 1 Introduction and Overview 1 Chapter 2 Employer Responses to the Minimum Wage: Evidence from the Fast-Food Industry 20 Chapter 3 Statewide Evidence on the Effect of the 1988 California Minimum Wage 78 Chapter 4 The Effect of the Federal Minimum Wage on Low-Wage Workers: Evidence from Cross-State Comparisons 113 Chapter 5 Additional Employment Outcomes 152 Chapter 6 Evaluation of Time-Series Evidence 178 Chapter 7 Evaluation of Cross-Section and Panel-Data Evidence 208 Chapter 8 International Evidence 240 Chapter 9 How the Minimum Wage Affects the Distribution of Wages, the Distribution of Family Earnings, and Poverty 276 Chapter 10 How Much Do Employers and Shareholders Lose? 313 Chapter 11 Is There an Explanation? Alternative Models of the Labor Market and the Minimum Wage 355 Chapter 12 Conclusions and Implications 387 References 401 Index 415