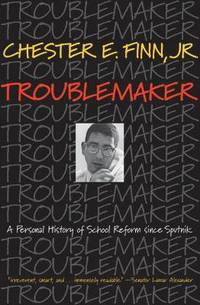 A Personal History of School Reform since Sputnik

av Chester E Finn Jr
Häftad Engelska, 2016-02-12
249
Köp
Spara som favorit
Skickas inom 7-10 vardagar.
Fri frakt inom Sverige för privatpersoner.
Finns även som
Visa alla 1 format & utgåvor
Few people have been more involved in shaping postwar U.S. education reforms--or dissented from some of them more effectively--than Chester Finn. Assistant secretary of education under Ronald Reagan, and an aide to politicians as different as Richard Nixon and Daniel Moynihan, Finn has also been a high school teacher, an education professor, a prolific and best-selling writer, a think-tank analyst, a nonprofit foundation president, and both a Democrat and Republican. This remarkably varied career has given him an extraordinary insider's view of every significant school-reform movement of the past four decades, from racial integration to No Child Left Behind. In Troublemaker, Finn has written a vivid history of postwar education reform that is also the personal story of one of the foremost players--and mavericks--in American education. Finn tells how his experiences have shaped his changing views of the three major strands of postwar school reform: standards-driven, choice-driven, and profession-driven. Of the three, Finn now believes that a combination of choice and standards has the greatest potential, but he favors this approach more on pragmatic than ideological grounds, arguing that parents should be given more options at the same time that schools are allowed more flexibility and held to higher performance norms. He also explains why education reforms of all kinds are so difficult to implement, and he draws valuable lessons from their frequent failure. Clear-eyed yet optimistic, Finn ultimately gives grounds for hope that the best of today's bold initiatives--from charter schools to technology to makeovers of school-system governance--are finally beginning to make a difference.
Visa hela texten

Honorable Mention for the 2008 PROSE Award in Education, Association of American Publishers "I love the fact that no one is spared [Finn's] acidic sense of humor. That makes him a first-class writer, and Troublemaker may be the best of his many books... The book offers one of the most enjoyable, astute and fair-minded reviews of the topsy-turvy course of our national effort to improve schools. It flavors that complex tale with the story of Checker Finn, a smart kid from Dayton, Ohio, who wisely attached himself to some of the most thoughtful political figures of his era and brought their practical approach to fixing schools to a new generation... These stories will not make Finn any less unpopular with people on both sides of our often bitter educational debates, but I wish we had more thinkers as aggravating and insightful as he is. All of us can learn much from him, and his book."--Jay Mathews, Washington Post "A lively and wise new memoir...Should be required reading for charter school leaders and left-wing teacher unionists alike. A 'personal history' of the last five decades of public schooling, Mr. Finn's memoir weaves America's story with his own...Mr. Finn's conclusions have the unpopular characteristic of adhering neither to one side nor to the other. Yes to vouchers, he says, as long as voucher schools have high quality; yes to business involvement, as long as it does not abandon sound instructional knowledge and the imperative of a civic mission; yes to standards, but only if they are rigorous. These are not sexy answers, but they are thoughtful ones, and for the field of education, that is quite the right medicine."--Elizabeth Green, New York Sun "A blow-by-blow account of Checker's efforts to improve American schooling...Finn approaches education with [a] sense of personal dedication, but the book is neither wistful nor weary. Troublemaker displays the energy and combativeness of a man who knows a good education can solve problems and improve lives."--Phil Brand, Washington Times "A very readable rundown of the past four decades of education policymaking by a man who was there."--Neil McCluskey, School Reform News "Having meticulously and fair-mindedly detailed four decades of 'staggering inertia' in American educational policy, Finn nevertheless tries to end on an upbeat note."--Commentary "Chester Finn's book is an indispensable guide and an inspiring portrait of what individuals and groups with common sense, civic commitment, and perseverance can accomplish in realizing the battered but noble promise of modern education--but also a sobering picture of what they are up against."--M. D. Aeschliman, Modern Age

Chester E. Finn, Jr., is president of the Thomas B. Fordham Foundation, senior fellow at Stanford's Hoover Institution, and senior editor of Education Next. He is the author of We Must Take Charge: Our Schools and Our Future (Free Press) and the coauthor of What Do Our 17-Year-Olds Know? (Harper & Row) and Charter Schools in Action (Princeton), among many other books.