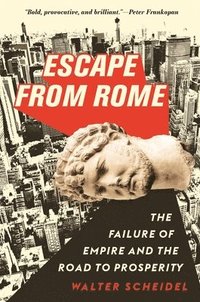 The Failure of Empire and the Road to Prosperity

av Walter Scheidel
Inbunden Engelska, 2019-09-20
240
Köp
Spara som favorit
Skickas inom 7-10 vardagar.
Fri frakt inom Sverige för privatpersoner.
Finns även som
Visa alla 1 format & utgåvor
The gripping story of how the end of the Roman Empire was the beginning of the modern world The fall of the Roman Empire has long been considered one of the greatest disasters in history. But in this groundbreaking book, Walter Scheidel argues that Rome's dramatic collapse was actually the best thing that ever happened, clearing the path for Europe's economic rise and the creation of the modern age. Ranging across the entire premodern world, Escape from Rome offers new answers to some of the biggest questions in history: Why did the Roman Empire appear? Why did nothing like it ever return to Europe? And, above all, why did Europeans come to dominate the world? In an absorbing narrative that begins with ancient Rome but stretches far beyond it, from Byzantium to China and from Genghis Khan to Napoleon, Scheidel shows how the demise of Rome and the enduring failure of empire-building on European soil ensured competitive fragmentation between and within states. This rich diversity encouraged political, economic, scientific, and technological breakthroughs that allowed Europe to surge ahead while other parts of the world lagged behind, burdened as they were by traditional empires and predatory regimes that lived by conquest. It wasn't until Europe "escaped" from Rome that it launched an economic transformation that changed the continent and ultimately the world. What has the Roman Empire ever done for us? Fall and go away.
Visa hela texten

"Finalist for the PROSE Award in Archaeology and Ancient History, Association of American Publishers" "One of the Evening Standard's Best Books of 2019" "One of the Financial Times' Best Books of 2019: Economics" "Fascinating and arresting."---Stephen Davies, Reason Magazine "Escape from Rome deserves to be taken very seriously . . . . this is a fiercely intelligent, closely argued book."---Peter Thonemann, Times Literary Supplement "Walter Scheidel's Escape from Rome: The Failure of Empire and the Road to Prosperity is an outstanding, epic history of the fall of the Roman Empire and rise of the European West."---Simon Sebag Montefiore, Evening Standard "A sweeping academic survey comparing empires and eras. . . . Escape From Rome makes bold claims about the nature of empire and the roots of the modern world and backs them up with thoughtful analysis."---Dominic Lynch, America "Scheidel marshals his facts with verve and force . . . . the abiding impression left by reading this book is not that human progress was inevitable - even at such a bloody cost - but that it was profoundly fragile."---Robert Colvile, The Times "Escape from Rome is a well-written survey of an enormous literature on the history of the world. . . . It is fun and interesting to read. . . . An admirable book."---Peter Temin, EH.Net "Scheidel makes a bracing case, backed by every counterfactual tool of contemporary scholarship, against resurgent European empire at any time. . . . What did the Romans do for us? Scheidel does not give the usual answers."---Peter Stothard, Financial Times "A tour de force of world history."---Tony Jones, The Christian Century "A challenging, detailed and thought-provoking study of how the end of Rome benefited the West rather than the reverse."---Richard Owen, The Tablet "Thought-provoking. . . . Impressive."---P.G. Wallace, Choice Reviews "Insightful. . . an outstanding modern summation of a strand of research which goes back at least as far as Montesquieu and David Hume."---Mark Koyama, Journal of Economic Literature

Walter Scheidel is the Dickason Professor in the Humanities, Professor of Classics and History, and a Kennedy-Grossman Fellow in Human Biology at Stanford University. His many books include The Great Leveler: Violence and the History of Inequality from the Stone Age to the Twenty-First Century (Princeton). He lives in Palo Alto, California. Twitter @WalterScheidel