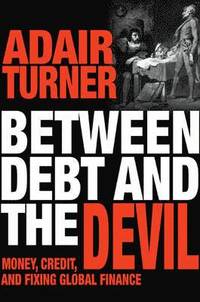 Between Debt and the Devil

av Adair Turner
Häftad Engelska, 2017-06-09
189
Köp
Spara som favorit
Skickas inom 5-8 vardagar.
Fri frakt inom Sverige för privatpersoner.
Finns även som
Visa alla 2 format & utgåvor
Adair Turner became chairman of Britain's Financial Services Authority just as the global financial crisis struck in 2008, and he played a leading role in redesigning global financial regulation. In this eye-opening book, he sets the record straight about what really caused the crisis. It didn't happen because banks are too big to fail--our addiction to private debt is to blame. Between Debt and the Devil challenges the belief that we need credit growth to fuel economic growth, and that rising debt is okay as long as inflation remains low. In fact, most credit is not needed for economic growth--but it drives real estate booms and busts and leads to financial crisis and depression. Turner explains why public policy needs to manage the growth and allocation of credit creation, and why debt needs to be taxed as a form of economic pollution. Banks need far more capital, real estate lending must be restricted, and we need to tackle inequality and mitigate the relentless rise of real estate prices. Turner also debunks the big myth about fiat money--the erroneous notion that printing money will lead to harmful inflation. To escape the mess created by past policy errors, we sometimes need to monetize government debt and finance fiscal deficits with central-bank money. Between Debt and the Devil shows why we need to reject the assumptions that private credit is essential to growth and fiat money is inevitably dangerous. Each has its advantages, and each creates risks that public policy must consciously balance.
Visa hela texten

One of The Independent's Best Economics Books of the Year Bloomberg Businessweek's Best Books of the Year Financial Times Best Economics Books of of the Year One of Financial Times (FT.com) Best Economics Books of 2015, chosen by Martin Wolf One of the Strategy+Business Best Business Books 2016 in Economy One of The Independent's Best Economics Books 2015 One of Bloomberg Businessweek's Best Books of 2015, chosen by Vitor Constancio "[Between Debt and the Devil] represents an important challenge to economic orthodoxy, which, as [Turner] rightly notes, has already failed us once."--John Cassidy, New Yorker "Extensively researched and well-written."--Edward Chancellor, Wall Street Journal "[A] remarkable new book."--Will Hutton, Observer "Lucid and forcefully-argued."--Peter Thal Larsen, Reuters Breakingviews "Turner offers a convincing account of the debt-fuelled global economic cycle of the last 15 years or so. I found myself skimming over large sections and nodding in agreement."--Erik Britton, Management Today "Turner is more than just another thinker merrily seeking to provoke his audience; he is an experienced British policymaker accustomed to weighing up the angles... [Between Debt and the Devil] is as good as it can be, an overdue challenge to a taboo against monetary finance held sacred for too long."--Giles Wilkes, Financial Times "Adair Turner, the former chairman of Britain's Financial Services Authority and described by The Economist as a man for all policy crises, upends financial orthodoxy in Between Debt and the Devil. He argues that nothing regulators have done thus far has addressed the fundamental underlying cause of financial instability... Turner's book is tightly argued and is packed with insights about the financial markets as well as the real economy."--Brenda Jubin, Investing.com "If developed economies fall back into recession, people may hear quite a bit more about Lord Turner's ideas."--Economist "This is an important book because Turner thinks clearly where much analysis has been fuzzy ... [a] stimulating book."--Ben Chu, The Independent "Adair Turner's Between Debt and the Devil: Money, Credit and Fixing Global Finance--out this month--joins a select group of books that provide as clear an explanation of the financial crisis as one could hope for."--Diane Coyle, The Enlightened Economist "Some astonishingly original ideas."--Alex Brummer, Daily Mail "[A] brilliant new book... [The] prose crisply conveys analysis of real force."--Tom Clark, Guardian "[A] scintillating individual [contribution] to the debate not just on the future of finance but how we should run our economy."--Felix Martin, New Statesman "Adair Turner's new book Between Debt and the Devil is definitely worth your time."--Clive Crook, Bloomberg View "A challenging but relentlessly logical book about the flaws of the system that led us to the Great Recession: excess finance, excessive indebtedness. He adds to the literature that explains why more and more finance is not always good. The proposed cure requires going beyond the present financial regulatory reform. A bold and thought provoking book."--Vitor Constancio, Vice president, European Central Bank, one of Bloomberg's Best Books of 2015 "This book lays down a challenge which subsequent accounts of monetary policy will have to address."--David Willetts, Prospect "[An] excellent book."--Nick Butler, Financial Times "[H]is extensive work both at financial institutions and in academia, have given Turner an insider's view of the world of finance and economics. But his conclusions--that the banking system needs to be fundamentally restructured, and that periodically, instead of a government running up debt, the central bank should just print money for the government to spend--are far from conventional."--Matt

Bloggat om Between Debt and the Devil

Adair Turner is chairman of the Institute for New Economic Thinking and the author of Economics after the Crisis.

Acknowledgments ix Preface: The Crisis I Didn't See Coming xi Introduction: Too Important to Be Left to the Bankers 1 Part I Swollen Finance 17 1 The Utopia of Finance for All 19 2 Inefficient Financial Markets 34 Part II Dangerous Debt 49 3 Debt, Banks, and the Money They Create 51 4 Too Much of the Wrong Sort of Debt 61 5 Caught in the Debt Overhang Trap 74 6 Liberalization, Innovation, and the Credit Cycle on Steroids 88 7 Speculation, Inequality, and Unnecessary Credit 108 Part III Debt, Development, and Capital Flows 131 8 Debt and Development: The Merits and Dangers of Financial Repression 133 9 Too Much of the Wrong Sort of Capital Flow: Global and Eurozone Delusions 149 Part IV Fixing the System 161 10 Irrelevant Bankers in an Unstable System 163 11 Fixing Fundamentals 175 12 Abolishing Banks, Taxing Debt Pollution, and Encouraging Equity 186 13 Managing the Quantity and Mix of Debt 195 Part V Escaping the Debt Overhang 211 14 Monetary Finance-Breaking the Taboo 213 15 Between Debt and the Devil-A Choice of Dangers 231 Epilogue: The Queen's Question and the Fatal Conceit 241 Notes 253 Bibliography 277 Index 289