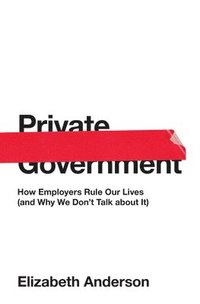 av Elizabeth Anderson
Inbunden Engelska, 2017-05-23
329
Köp
Spara som favorit
Finns även som
Visa alla 2 format & utgåvor
Why our workplaces are authoritarian private governments--and why we can't see it One in four American workers says their workplace is a "dictatorship." Yet that number probably would be even higher if we recognized most employers for what they are--private governments with sweeping authoritarian power over our lives, on duty and off. We normally think of government as something only the state does, yet many of us are governed far more--and far more obtrusively--by the private government of the workplace. In this provocative and compelling book, Elizabeth Anderson argues that the failure to see this stems from long-standing confusions. These confusions explain why, despite all evidence to the contrary, we still talk as if free markets make workers free--and why so many employers advocate less government even while they act as dictators in their businesses. In many workplaces, employers minutely regulate workers' speech, clothing, and manners, leaving them with little privacy and few other rights. And employers often extend their authority to workers' off-duty lives. Workers can be fired for their political speech, recreational activities, diet, and almost anything else employers care to govern. Yet we continue to talk as if early advocates of market society--from John Locke and Adam Smith to Thomas Paine and Abraham Lincoln--were right when they argued that it would free workers from oppressive authorities. That dream was shattered by the Industrial Revolution, but the myth endures. Private Government offers a better way to talk about the workplace, opening up space for discovering how workers can enjoy real freedom. Based on the prestigious Tanner Lectures delivered at Princeton University's Center for Human Values, Private Government is edited and introduced by Stephen Macedo and includes commentary by cultural critic David Bromwich, economist Tyler Cowen, historian Ann Hughes, and philosopher Niko Kolodny.
Visa hela texten

"Private Government is a welcome and important call to bring workplace governance back into political theory and discourse, and should be taken seriously if we are to promote greater democracy in the workplace." * Times Literary Supplement * "Elizabeth Anderson is a philosopher on the warpath. Her Tanner Lectures . . . take aim at the unelected, arbitrary and dictatorial power that employers, particularly in the US where labour laws are flimsy, hold over their work-forces. . . . [Anderson's argument has] subtlety and force."---Philip Roscoe, Times Higher Education "In Private Government, Elizabeth Anderson . . . explores how the discipline of work has itself become a form of tyranny, documenting the expansive power that firms now wield over their employees in everything from how they dress to what they tweet. . . . [Private Government] highlight[s] the dramatic and alarming changes that work has undergone over the past century--insisting that, in often unseen ways, the changing nature of work threatens the fundamental ideals of democracy: equality and freedom."---Miya Tokumitsu, , The New Republic "[Private Government] gives a clear, powerful argument for ideas that many people will have already had in only inchoate form."---Nate Holdren, History News Network, "[Private Government] is a well-documented, captivating discussion that should be addressed in an interdisciplinary manner, and an excellent starting point to make that happen." * Choice * "In Private Government, Anderson explores a striking American contradiction. On the one hand, we are a freedom-obsessed society, wary of government intrusion into our private lives; on the other, we allow ourselves to be tyrannized by our bosses, who enjoy broad powers of micromanagement and coercion."---Joshua Rothman, NewYorker.com "Elizabeth Anderson's bold Private Government is a firm foundation for twenty-first-century civic education in workplace democracy. Anderson exposes the inevitably political dimensions of work. And she leaves us in no doubt that for employees the workplace is tyrannical, ruled by the whims of exploitative and mercurial bosses."---Frank Pasquale, The Hedgehog Review "I fully acknowledge that Private Government is a significant work that could potentially reorient the political theory of economic institutions."---Ugur Aytac, International Dialogue "Private Government demonstrates the attributes that have made Anderson one of the most compelling philosophers of our time. . . . It is, in short, deeply humane, helping us think more clearly about who we want to become, as individuals and in our* collective lives together. To my mind, it represents the best of political philosophy.""---Vafa Ghazavi, Oxford Review of Books "Private Government is an important and timely contribution to contemporary political theory, especially for anyone thinking about freedom in the workplace or about reforming or replacing existing economic institutions."---Paul Raekstad, Krisis

Elizabeth Anderson is Arthur F. Thurnau Professor and John Dewey Distinguished University Professor of Philosophy and Women's Studies at the University of Michigan. She is the author of The Imperative of Integration (Princeton) and Value in Ethics and Economics. She lives in Ann Arbor.