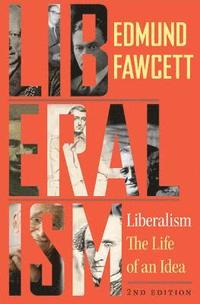 The Life of an Idea, Second Edition

av Edmund Fawcett
Häftad Engelska, 2018-05-22
259
Köp
Spara som favorit
Finns även som
Visa alla 1 format & utgåvor
A compelling history of liberalism from the nineteenth century to today Despite playing a decisive role in shaping the past two hundred years of American and European politics, liberalism is no longer the dominant force it once was. In this expanded and updated edition of what has become a classic history of liberalism, Edmund Fawcett traces its ideals, successes, and failures through the lives and ideas of exemplary thinkers and politicians from the early nineteenth century to today. Significant revisions-including a new conclusion-reflect recent changes affecting the world political order that many see as presenting new and very potent threats to the survival of liberal democracy as we know it. A richly detailed account of a vulnerable but critically important political creed, this book reminds us that to defend liberalism it is vital to understand its character and history.
Visa hela texten

"Honorable Mention for the 2015 PROSE Award in Government & Politics, Association of American Publishers" "A richly informative historical tour of liberal leaders and concepts. . . . [Fawcett] takes a commendably liberal approach."---Alan Wolfe, New York Times Book Review "[E]xcellent. . . . What Fawcett clearly and compellingly shows is that the relationship of capitalism to the state, of economics to politics, should be at the heart of any history of liberal ideas. Whether you take his version as a story about liberalism's realist adaptability or its counterrevolutionary intent, it's a fitting one for a moment in which capitalism and political economy are back on the agenda."---Katrina Forrester, The Nation "Fawcett's workmanlike history of the bundle of ideas and practices that liberals have espoused since the Spanish liberales coined the term after the Napoleonic wars is an excellent guide to liberalism's rise and fall."---David Marquand, New Republic "[A] comprehensive, quirky, scholarly and personal exploration of one of the dominant ideas in political discourse. . . . [T]his is a phenomenal work of research and synthesis. . . . A pool of profound, rigorous research and thought that has no shallow end." * Kirkus Reviews * "[Liberalism: The Life of an Idea] confirms the virtues of the disciplined generalist's approach to the exploration of politics. Deftly combining history, economic thought, and political theory, Fawcett has produced the sort of synoptic work that in our era is increasingly unlikely to come from universities. . . . [It] not only draws on the practicing journalist's close observation of political affairs but also the educated person of letters' facility across many disciplines. The result is an engrossing narrative of liberalism's dramatic career--often lustrous but also marked by its share of delusion, hypocrisy, hubris, and tragedy."---Peter Berkowitz, Real Clear Politics "Liberalism by Edmund Fawcett is not only a gripping piece of intellectual history, it also equips the reader to understand today's threats--and how they might be withstood. . . . Liberalism is indeed under siege. Those who would fortify the walls would do well to study the foundations. Mr Fawcett's book offers an admirable archaeology." * Economist * "A book so good I want to read it again. . . . [A]n intellectual page-turner. . . . [A] seamless mix of philosophy, history, biography and history of ideas."---David Goodhart, Standpoint "In Liberalism: The Life of an Idea, Fawcett draws on the experiences and ideas of dozen of thinkers and politicians in an informative, lively, and provocative history of a political tradition he deems 'worth standing up for.' . . . Fawcett's book is an immensely interesting, informative, and important assessment of liberalism. . . . Liberalism is as relevant as ever, Fawcett concludes, passionately and persuasively."---Glenn C. Altschuler, Huffington Post "[An] impressive account of the 'life of an idea.' . . . [O]ne of the many virtues of Fawcett's unfailingly stimulating book is that he makes you look past the misleading labels with which we characterise political argument. For anyone interested in the history of the ideas that have shaped our society, his book is essential reading."---Simon Shaw, Mail on Sunday "[M]agnificent."---Bruce Edward Walker, Morning Sun "Fawcett has written a marvelous book. . . . [H]is erudition would be daunting if he didn't write with such verve. . . . [I]t's a pleasure."---Clive Crook, Bloomberg View "As Fawcett's compelling history reveals, the twentieth century turned out to be much more unstable and dangerous than the early liberals anticipated and has forced liberals ever since to temper their expectations for human betterment with a world-weary search for small steps that can keep the liberal international system on an upward trajectory.&qu

Edmund Fawcett worked at The Economist for more than three decades, serving as chief correspondent in Washington, Paris, and Berlin, as well as European and literary editor. His writing has also appeared in the New York Times, the Los Angeles Times, the Guardian, and the Times Literary Supplement, among other publications.