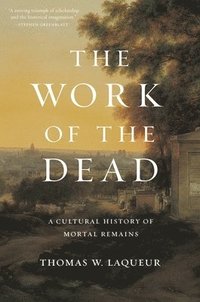 The Work of the Dead

A Cultural History of Mortal Remains

av Professor Thomas W Laqueur
Häftad Engelska, 2018-05-08
259
Köp
Spara som favorit
Skickas inom 7-10 vardagar.
Fri frakt inom Sverige för privatpersoner.
Finns även som
Visa alla 2 format & utgåvor
The meaning of our concern for mortal remains-from antiquity through the twentieth century The Greek philosopher Diogenes said that when he died his body should be tossed over the city walls for beasts to scavenge. Why should he or anyone else care what became of his corpse? In The Work of the Dead, acclaimed cultural historian Thomas Laqueur examines why humanity has universally rejected Diogenes's argument. No culture has been indifferent to mortal remains. Even in our supposedly disenchanted scientific age, the dead body still matters-for individuals, communities, and nations. A remarkably ambitious history, The Work of the Dead offers a compelling and richly detailed account of how and why the living have cared for the dead, from antiquity to the twentieth century. The book draws on a vast range of sources-from mortuary archaeology, medical tracts, letters, songs, poems, and novels to painting and landscapes in order to recover the work that the dead do for the living: making human communities that connect the past and the future. Laqueur shows how the churchyard became the dominant resting place of the dead during the Middle Ages and why the cemetery largely supplanted it during the modern period. He traces how and why since the nineteenth century we have come to gather the names of the dead on great lists and memorials and why being buried without a name has become so disturbing. And finally, he tells how modern cremation, begun as a fantasy of stripping death of its history, ultimately failed-and how even the ashes of the victims of the Holocaust have been preserved in culture. A fascinating chronicle of how we shape the dead and are in turn shaped by them, this is a landmark work of cultural history.
Visa hela texten

"Laqueur brings prodigious compassion, erudition, and independence of thought to his task: every page is instructive, whether he is discussing the pollution caused by crematoria, the problems of pauper burials, the belief that undressing a corpse and opening windows makes it easier for the soul to leave the body, or just the listing of the names of the dead."---David Ganz, The Review of Politics "Poetically, powerfully sweeping across human history, Laqueur explores what the rituals of caring for the departed reveal about the living. Their story is ours; their absence shapes art and architecture, communities and civilizations. In every era and every culture, Laqueur finds the dead body imbued with meaning." * Swarthmore Bulletin * "[A] sprawling meditation on mortal remains. . . . Laqueur offers an intricate historical narrative about the place the dead occupy in our lives. . . . The Work of the Dead is a methodologically bracing book."---Thomas Meaney, London Review of Books "This massive, mesmerizing work contains much that's worth pondering." * Publishers Weekly * "One of The Guardian's Best Books of 2015, selected by Alison Light" "Winner of the 2018 Laura Shannon Prize in Contemporary European Studies, Nanovic Institute" "Winner of the 2016 George L. Mosse Prize, American Historical Association" "The product of prodigious research and a subtle and sophisticated knowledge of history, anthropology, and philosophy, The Work of the Dead is as magnificent--and mindboggling--as it is monumental."---Glenn C. Altschuler, Huffington Post "Do the dead matter? This is the central question in this meticulously researched, all-encompassing exploration of our mortal remains. . . . In this intimate and often very personal reflection, Laqueur asserts that we need our rituals to serve the dead to smooth over the rent that is caused in the passing of those we love. . . This thought-provoking tome, erudite and finely written, seemingly encapsulates all past uttering on the dead in our fleetingly short lives."---Julie Peakman, History Today "Laqueur effectively shows that remains of the dead matter long after they decompose . . . [and his] engaging writing style enlivens this somber subject." * Library Journal * "Magnificent. . . . Dazzling in its scope, expertly researched and crafted,The Work of the Dead shows us what is important about our humanity and longings. It is also a page-turner and a terrific read."---Sharon R. Kaufman, Los Angeles Review of Books "2016 Gold Medal Winner in World History, Independent Publisher Book Awards" "This book is a monumental Magnum Opus covering the cultural history of how we are treated mortal remains. . . . This is surely the definitive treatment of the subject, a landmark and highly readable work."---David Lorimer, Paradigm Explorer "Laqueur's book is a monumental undertaking, teeming with so many absorbing anecdotes and so much vivid information that it can be read either compulsively or for an hour a day, just to keep in sight of the nub of our fears and the often romantic absurdity of our hopes and superstitions."---Gregory Day, Sydney Morning Herald "After being asked what he would like to have done with his body after he died, the Greek philosopher Diogenes replied that he wanted it thrown out for animals to devour. Thousands of years later, his answer can still shock. Thomas Laqueur explains why in his sweeping history of the way humans have grappled with death--an abstract terror made concrete by the bodies that remain when the dead have passed on. Combining anthropological reflections on the cultural functions of the dead with historical investigations of the shifting ways their bodies have been treated, Laqueur uses the stubborn resistance to Diogenes' provocation to explore the world the dead left behind."---Tim Shenk, Dissent "[The Work of