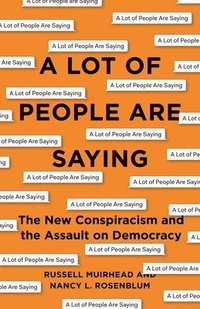 A Lot of People Are Saying

The New Conspiracism and the Assault on Democracy

av Nancy L Rosenblum, Russell Muirhead
Inbunden Engelska, 2019-03-15
279
Köp
Spara som favorit
Skickas inom 7-10 vardagar.
Fri frakt inom Sverige för privatpersoner.
Finns även som
Visa alla 3 format & utgåvor
How the new conspiracists are undermining democracy-and what can be done about it Conspiracy theories are as old as politics. But conspiracists today have introduced something new-conspiracy without theory. And the new conspiracism has moved from the fringes to the heart of government with the election of Donald Trump. In A Lot of People Are Saying, Russell Muirhead and Nancy Rosenblum show how the new conspiracism differs from classic conspiracy theory, why so few officials speak truth to conspiracy, and what needs to be done to resist it. Classic conspiracy theory insists that things are not what they seem and gathers evidence-especially facts ominously withheld by official sources-to tease out secret machinations. The new conspiracism is different. There is no demand for evidence, no dots revealed to form a pattern, no close examination of shadowy plotters. Dispensing with the burden of explanation, the new conspiracism imposes its own reality through repetition (exemplified by the Trump catchphrase "a lot of people are saying") and bare assertion ("rigged!"). The new conspiracism targets democratic foundations-political parties and knowledge-producing institutions. It makes it more difficult to argue, persuade, negotiate, compromise, and even to disagree. Ultimately, it delegitimates democracy. Filled with vivid examples, A Lot of People Are Saying diagnoses a defining and disorienting feature of today's politics and offers a guide to responding to the threat.
Visa hela texten

"Muirhead and Rosenblum have pointed out something genuinely new and disturbing, but in an appropriately careful, levelheaded way. Just one of many reasons this is a book worth reading, even if it doesn't make for a particularly happy story. . . . I'd recommend it to anyone disturbed by what's going on."---Jesse Singal, New York Magazine's Intelligencer "There's this book, A Lot of People Are Saying: The New Conspiracism and the Assault on Democracy, and I've been thinking about it a lot because it does capture something essential about how we respond in these moments."---Jon Lovett, Pod Save America "One of the Financial Times' Summer Books of 2019: Politics" "Timely and insightful . . . . A tremendous contribution . . . . It identifies and names a new style of political discourse and clarifies the danger it poses . . . . At a time when so much attention focuses on Trump's formal abuses of power, A Lot of People Are Saying shines an illuminating spotlight on the even more destructive power of his words, and the wild eddies of unreason they unleash."---Lee Drutman, Washington Monthly "Both terrifying and hopeful - and maybe the best book I've read recently on the rise of conspiratorial thinking in the Trump era. (The section on "enacting democracy" is vital)." * Carlos Lozada on Twitter * "[Muirhead and Rosenblum] are convincing in their argument that there is something different afoot in the world of conspiracy and that danger lies ahead if we don't confront it with truth and action." * Kirkus * "[The authors] insist that there is a meaningful difference between believing in a conspiracy theory and committing conspiracism, without any theory at all."---Jill Lepore, Times Literary Supplement

Bloggat om A Lot of People Are Saying

Russell Muirhead is the Robert Clements Professor of Democracy and Politics at Dartmouth College and the author of The Promise of Party in a Polarized Age and Just Work. He lives in Hanover, New Hampshire. Nancy L. Rosenblum is the Senator Joseph Clark Research Professor of Ethics in Politics and Government at Harvard University. Her books include Good Neighbors: The Democracy of Everyday Life in America and On the Side of the Angels: An Appreciation of Parties and Partisanship (both Princeton). She lives in New York City.