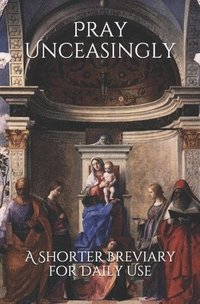 A Shorter Breviary for Daily Use

A Shorter Breviary for Busy People

It is an ancient practice of the Church for individual Christians to set aside specific times of day to be sanctified by prayer. Indeed, this practice of offering formal prayer to God at particular times of day predates the Incarnation of Christ and reaches back to the ancient sacrifices and prayers established by the covenant with Moses. Even more than that, the sanctification of certain times of day harkens back to the very dawn of creation and honors the divine order God gave to the world when when he separated the light from the darkness and created the sun, moon, and stars to govern the passing of time.

This sacred practice (known as the Liturgy of the Hours, the Divine Office, or even simply the Work of God), is the inheritance of each and every Christian, regardless of whether they are cleric or lay, monastic or living in the world. Indeed, in recent years the Church has renewed the urgent call to each man and woman of good will to embrace their precious inheritance as sons and daughters of God and revive the practice of liturgical prayer at the key moments of the day.

Particular times of the day stand out as natural moments to be dedicated to God: upon rising just before dawn, morning praises as the day begins, midday prayers when the sun is at its highest, the evening sacrifice of thanksgiving and petition at dusk, completing the day at nightfall asking God to bless our sleep, and calling on God in prayer when we wake in the middle of the night.

This simplified version even restores some of the more ancient elements that, although they have fallen out of memory in the West, are still in use by many churches in the East. This book of prayer is intended to be truly catholic in the sense that it is meant to be universal, taking into account the patterns of life of the modern world and bringing the ancient Christian inheritance to serve the needs of the present day in a way that speaks to a spirituality of sanctifying everyday life - a spirituality as old and as new as the Gospel itself.

This newly edited volume includes an easy to learn, simplified-and thus memorizable(!)-form of the liturgical prayers of the Church for the various hours, including Rising, Morning Praises, Mid-day, Evening Prayer/Evensong, Night Prayer, and Midnight (corresponding to the traditional hours in the West of Matins, Lauds, Terce/Sext/None, Vespers, Compline, and Vigils). In addition to these liturgical prayers for t...
Visa hela texten